In this article, we will set up GitHub pre-commit hook using the pre-commit gem in Ruby On Rails, and we will use Git Hooks to run Rubocop, Brakeman, and Rspec.

What is GitHub Pre-commit Hook?

Pre-commit hook runs before typing the commit message. It’s primarily being used for linting or running tests to make sure everything is working. Pre-commit hooks are very helpful in maintaining the coding standards and are productive also as many of the suggested lint changes can be fixed automatically. It plays an essential role when multiple people are working on the same repo. Everyone will have their own way of writing the code and formatting it. But as a project, you can’t afford to have too many different formattings. By using pre-commit hooks, a team can make sure everything goes to the repo passed the checks and balances that are put in place.

This creates a .git/hooks/pre-commit script which will check your git config and run checks that are enabled.

If you want to use Bundler to specify a version of RuboCop, add the following to Gemfile:

And run the following to run pre-commit via Bundler:

If you are using rvm you need to install pre-commit into the default gemset, because it does not use the current environment

Alternatively, you can configure pre-commit to use the current rvm gemset

Here we are creating a config file to manage our pre-commit checks.

If we are trying to commit with incorrect format code or debugger present in code then it will stop commit and display something like the below image. 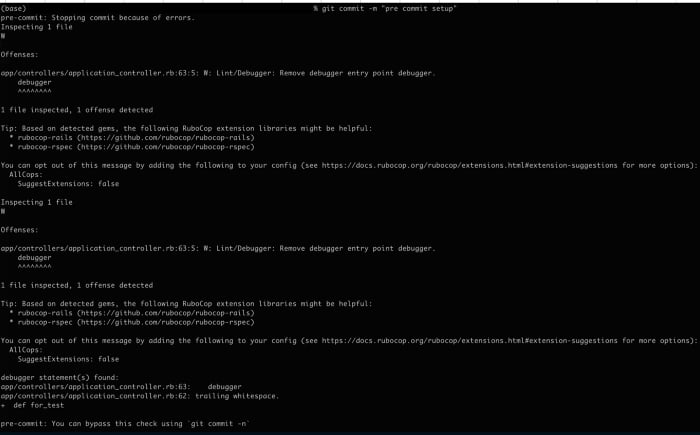 We will create a custom script according to the requirements. Here we are creating for RSpec and Brakeman.

It’s assumed that you already have a Rails app and use Brakeman to keep your app secure and Rspec to run your test cases.

Let’s start by creating a scripts directory in your app’s root folder:

Now we will create three different bash files for each command we want to run, in our case, it's Brakeman and Rspec. Below are files you can use and put inside the scripts folder:

Now, let’s create or edit pre-commit bash files which we will symlink into the .git folder where the hooks reside:

Next, we want to write a bash script to create the symlink between these files and the hooks:

All the files which we need are created, but before we run the install-hooks bash file to install our hooks, we need to make these files executables. This is done with the following command:

Now we are ready to run install-hooks.bash:

And you’re all set! Try committing and pushing your code. Before committing, Brakeman and Rspec will run.

If this guide has been helpful to you and your team please share it with others!

How to setup Metasploitable in a Mac with M1 chip

Once suspended, kanani_nirav will not be able to comment or publish posts until their suspension is removed.

Once unsuspended, kanani_nirav will be able to comment and publish posts again.

Once unpublished, all posts by kanani_nirav will become hidden and only accessible to themselves.

If kanani_nirav is not suspended, they can still re-publish their posts from their dashboard.

Once unpublished, this post will become invisible to the public and only accessible to Kanani Nirav.

Thanks for keeping DEV Community 👩‍💻👨‍💻 safe. Here is what you can do to flag kanani_nirav:

Unflagging kanani_nirav will restore default visibility to their posts.