Now that I have your attention. No, do not hand write code (even in interviews). Besides that cover photo, the last time I wrote code by hand was in college.

Speaking of college, there's a particular page in a particular textbook I think about often. Not for its content, but rather as an analogy to a concept I struggle to express any other way.

I want to dig deep into that concept today. If you came for a squabble on scribbling out software; you may leave, this is not the post you are looking for.

First, the page I think about, page 56 of Introduction to Graphics Communications for Engineers, Fourth Edition by Gary R. Bertoline (ISBN 978-0-07-352264-7) 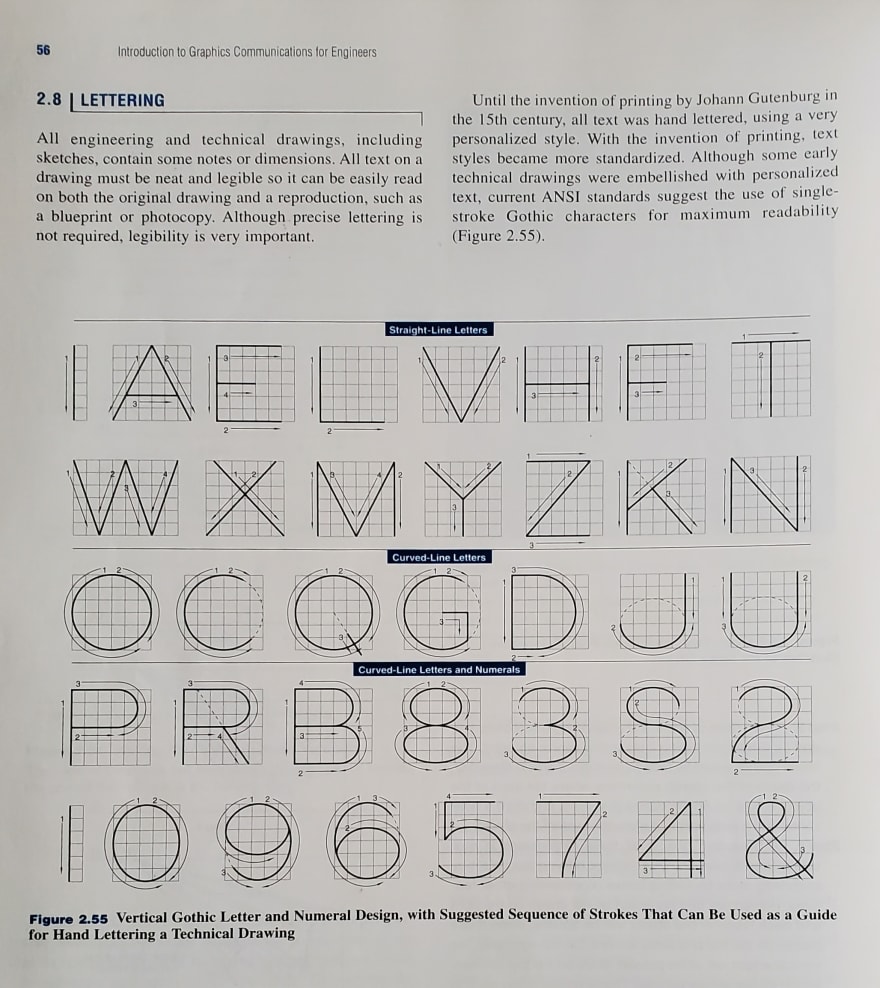 Look through those diagrams of how to write out letters and numbers. That's probably not the way you were taught your lettering and almost certainly not the steps you follow when writing today (I definitely didn't). But how legible is your writing?

The Crafting Process Directly Correlates to the Result's Quality.

Any organization that designs a system (defined broadly) will produce a design whose structure is a copy of the organization's communication structure.

But now I have an analogy for why Conway's Law is true. Look back at each of those letters; do you notice a pattern? Pen strokes are limited to going down and to the right (not strictly, but generally). No coincidence those are the directions a right-handed writer has most control over.

Could we write letters just the same without following such a stringent rule set? We could try. And we would have good results for a little while. But once we stopped focusing our handwriting would degrade once again back to our old pattern.

Beware Labelling Every Cost as a Problem

Go try writing using those instructions for a minute. It will be very slow at first. After a few minutes you should have a little rhythm and won't need to look at the instructions much.

But this stroke pattern will always be slower than others. The added guidelines to only go down and to the right forces the hand to lift and move the pen more often.

This is a cost not a problem. Problem's can be solved. Costs are the requirement to obtain what we want. We want legible handwriting. The cost is writing slower to follow the guidelines.

I have often seen discussions start up around all sorts of "problems" looking for any manner of "solution" in the business of software. I can hear them now, "If we could go up and left, we could write letters so much faster!", but that is not a problem; that was intentional!

I truly believe that particular habit, more than anything else, locks larger and older companies into all the odd behavior, poor customer service, and lack of innovation we see of them. They have straight-jacketed themselves with decades of "solutions" to "problems". But those "problems" were just the price of being the best in the business!

I know of no way to truly predict the final results of changing a making process. We have gross heuristics (fist gripping a pen will be less precise than gripping with forefingers; agile-ish practices see better utility production than waterfall-ish practices).

But to truly know? Specifically? We must try it and observe the results. In software development, this means the practices of the team (agile, cross-functional team-members, red-green-refactor TDD, etc.). The output to observe being the code written (if the people deciding what practices should be used can't understand the code output*, you have a Big Problem™).

Is the code produced of a similar quality? Maintainable? Extendable? Bug-free? Robust to unexpected situations?

No? Congratulations, the "problem" you solved was actually the price of quality.

I am now attempting to describe a process of designing a process intent on producing better processes. It's rabbit holes all the way down. But here is the best advice I have found:

Once suspended, kallmanation will not be able to comment or publish posts until their suspension is removed.

Once unsuspended, kallmanation will be able to comment and publish posts again.

Once unpublished, all posts by kallmanation will become hidden and only accessible to themselves.

If kallmanation is not suspended, they can still re-publish their posts from their dashboard.

Once unpublished, this post will become invisible to the public and only accessible to Nathan Kallman.

Thanks for keeping DEV Community 👩‍💻👨‍💻 safe. Here is what you can do to flag kallmanation:

Unflagging kallmanation will restore default visibility to their posts.