Hey everyone, welcome back to the new blog. In today's blog we are going to learn about Docker. So without wasting time let's get straight into it.

Docker is a tool which helps you run you application in isolated environment. Docker creates a isolated environment often called "container" where you run your application without getting affected by external factors. This helps in solving the major problem and often a joke "But this works on my computer". You can easily share images to spin up containers and it would work exactly the same as it would run on the machine it was built on. This is very effective tool while deploying your application to production

Steps to Containerize your application

This file is often referred as "recipe" for your container. This is a simple file which contains all and each step to setup and run your project. This file needs every detail from packages you install to the command you run in order to run that specific application. We will look more into how you can build your own dockerfile in the coming sections

Image is what you build out of your dockerfile. Image is easily sharable and storable. So if you want someone to try out your application you can just send them this docker image and they would be able to run the application exact same way without setting up anything on their local machines. Or even you can use these images to push your application in the production. You can think this a "class" from the "object oriented programming" reference.

Container is the running instance of an application. Containers are the built and setup using docker images. So whenever you get an image and you run it then a 'container' is created with all the information and this is the step where your application is actually running. You can create multiple containers from single image. You can think this as "object" from the "object oriented programming" reference. 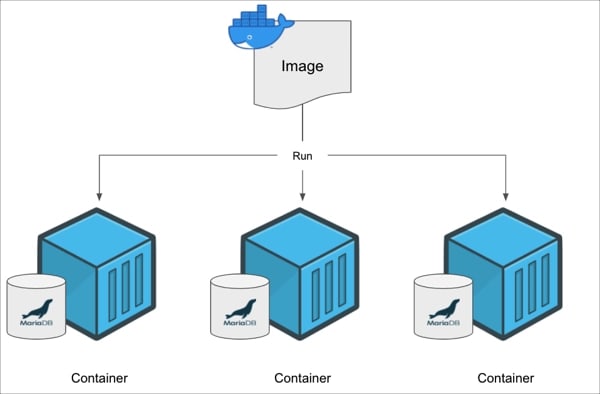 Every step in the docker file acts as a layer for next step while building the image out of it. Let's take a simple docker file as an example.

This is a dockerfile for a simple nodejs api script.

When you install docker it create 3 networks automatically 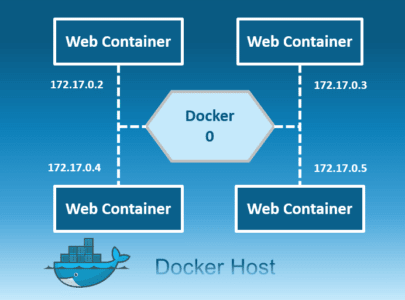 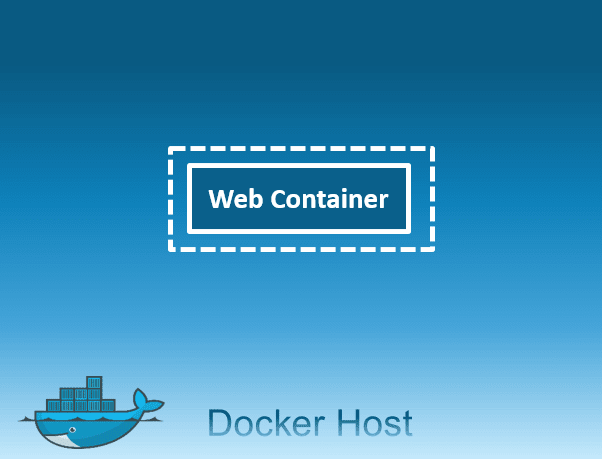 eg of the host: Taking same example as nginx from above 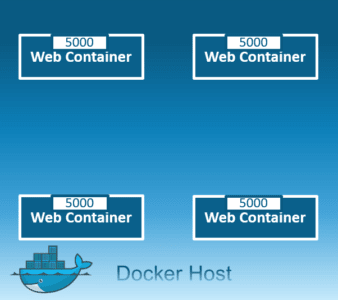 When we create containers on same docker host there is only 1 bridge created connecting all the containers by default. (eg: 172.17.0.1) and you want to create a new bridge maybe with ip (182.18.0.1) on the same host you need to do it through thte command 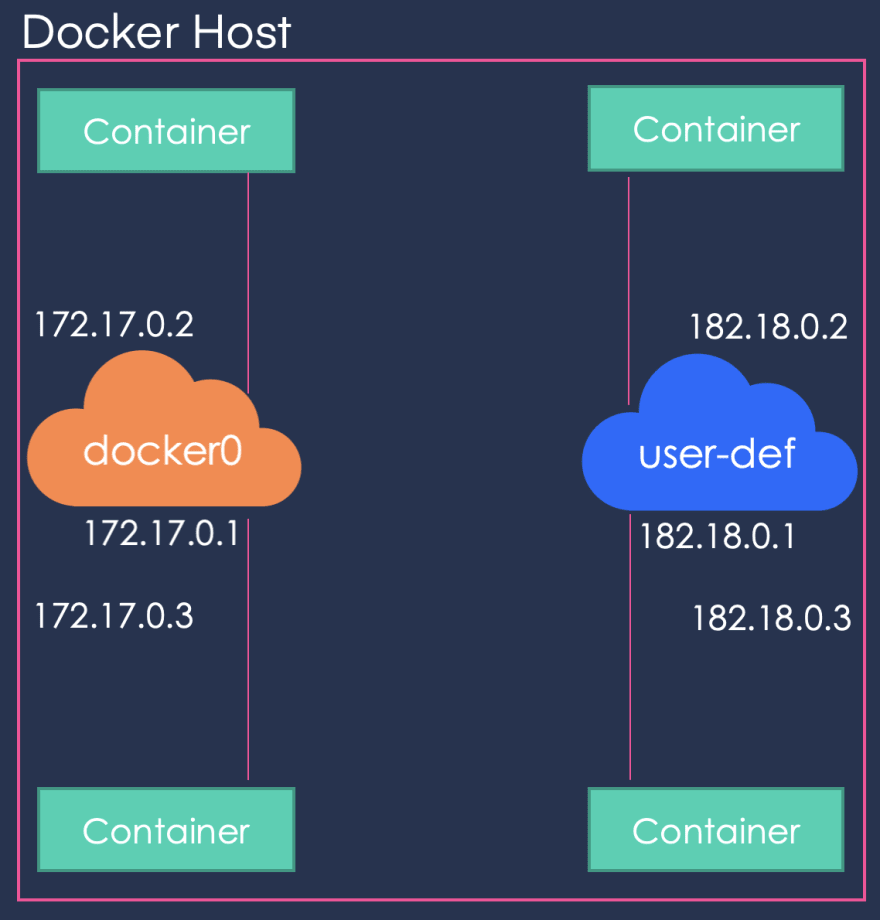 Docker compose is a feature provide by docker host to connect and spin up multiple containers with mostly different images but the application is dependent on both the images quickly.

For example frontend image eg: voting and backend database in mongodb so let's try creating a docker compose file for it

Let's see the docker architecture and how it runs applications in containers under the hood. When you install docker on your computer you essentially downloading 3 different components 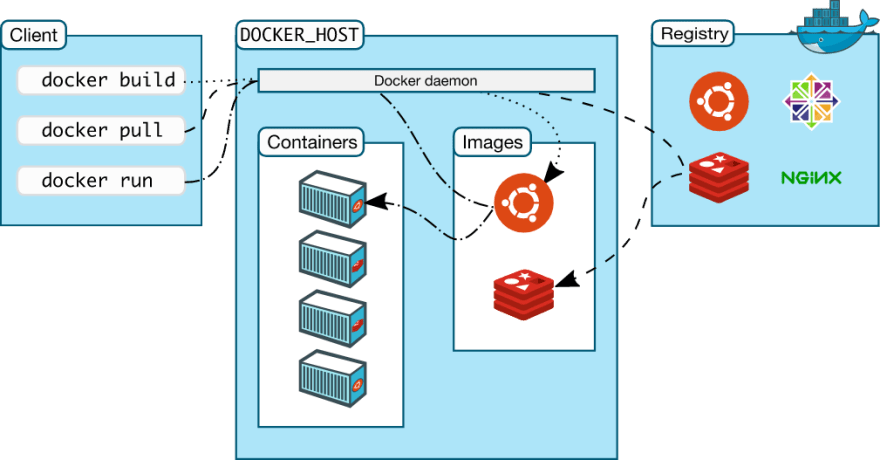 It is a backgroud process that manages docker objects like images, containers, volumes etc

It is a programming interface used to talk to the docker deamon and provide instructions. You can use this api to create your own differnt docker tools

And this is a CLI that we have used until now to perform action. It uses REST API to talk to the docker deamon.
Now the thing to note here is docker cli need not to be on same host. It can be on different computer and can still communicate with remote docker engine. Use the following command to do so

With simple docker run command you create instance of your application but that's just one instance what if you wanted to create multiple instance. In that case you will have to run docker run command multiple time. Not just this you will have to closly monitor the health of each container and spin up new instance if one already running likely goes down. And what about the health of docker host? What if the docker host goes down, in that case the containers hosted on that host becomes inaccessble too.
Orchestration is set of tools and scripts that helps us to host the containers in the real production environment. Generally Container Orchestration solution have multiple docker hosts that can host containers. So even if one fails, application is still accessible to others.
The following is the command used in docker swarm 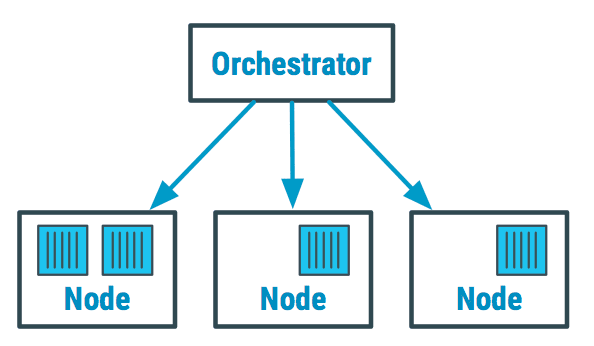 There are multiple orchestrations solutions available now a days

Well we deep dived quite a bit into the details of docker from simple commands to architecture but that's it for this blog. See you in the next one :D

Thank you so much for reading 💖

Catch me on my socials here: https://bio.link/kaiwalya

What diagram should I know as a software engineer? Part 2

How to Become a Docker Captain

Once suspended, kaiwalyakoparkar will not be able to comment or publish posts until their suspension is removed.

Once unsuspended, kaiwalyakoparkar will be able to comment and publish posts again.

Once unpublished, all posts by kaiwalyakoparkar will become hidden and only accessible to themselves.

If kaiwalyakoparkar is not suspended, they can still re-publish their posts from their dashboard.

Once unpublished, this post will become invisible to the public and only accessible to Kaiwalya Koparkar.

Thanks for keeping DEV Community 👩‍💻👨‍💻 safe. Here is what you can do to flag kaiwalyakoparkar:

Unflagging kaiwalyakoparkar will restore default visibility to their posts.