The specific articles in mind were 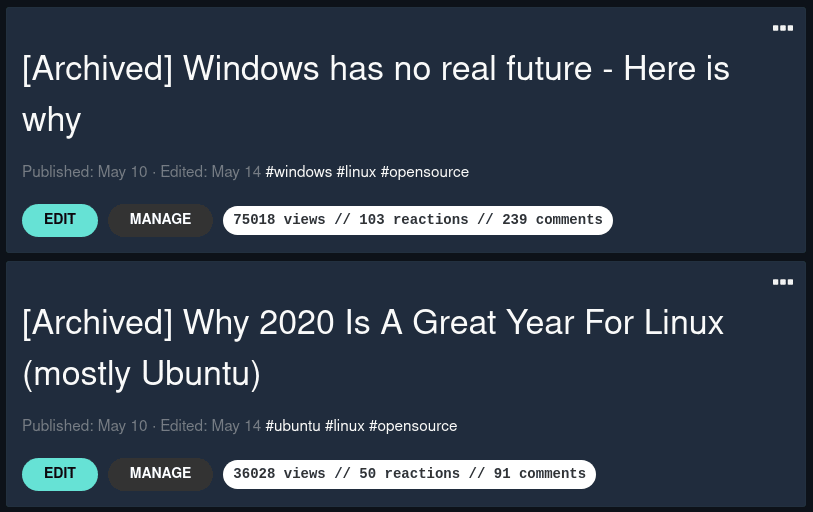 And with that, why? Why would I do this? To put it simply, the reaction. As I have mentioned I needed a break (one that I am cutting a little short). The whole explosion of comments - most highly negative - was insane to me.

I want to express my disappointment, not just in the dev.to community, but overall most who commented and went out of their way to DM me very hostile comments, and those who created a dev.to account to give me comments that were very hostile.

While yes, most of the 239 comments were probably kind or some form of an attempt at constructive criticism, a good chunk of them were polite ways of telling me "F-- off, I am right, you are an idiot". I am upset that this happened. While the ones that did say it in a more polite way - even though their claims were still giving false information - others did not. While I will not share screenshots, and many were hidden, it's still an issue.

It wasn't those who hated my point who got me the most upset. A couple of Linux elitists often did get far too hostile. I do not condone these specific users' actions, and please do not let these couple of jerks ruin your view of Linux as a whole, as they target posts like this for people who disagree.

Now the articles are archived. They have also been unpublished. If you wish to read them still, I will link them here:
Windows has no future
2020 is a great year for Linux

Yes, there were a lot of great comments, many of you were supportive and kind, but I still was unhappy with the bad apples of the bunch, no matter how few.

Also, I want to say sorry. I myself was not a good example of how to respond. I want to apologize for how I acted in some of the threads, some of the things I said were stupid, and others were even worse than some of the other bad apples.

To TL;DR this - I am unhappy with how some reacted, whether in the dev.to community or not. I also want to apologize for how I acted, which didn't set the example that I should have. The articles can still be found, but they have been unpublished and archived, and I will not be responding to new comments on them.

KaiLikesLinux
I am Kai Lyons, a general OS enthusiast, programming language fanatic, and domain extension guru. I have weird hobbies. I founded, fund, and work on Fivnex related projects
Tutorial for making an Ubuntu fork. JS: Functions inside Constants, When, How, and Why to use them
#javascript
Should You Use Python? 5 Pros and Cons.
#python