Update: They made a public apology, thank you, Lutris! 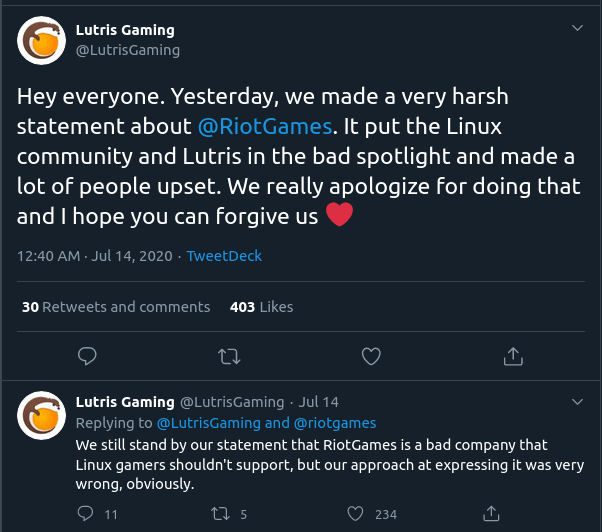 Dear Lutris,
I need to complain over a recent Tweet with two words while mentioning a company. This Tweet is dangerous, as it will hurt Linux gamers overall.

I did reply to the Tweet with the @UbuntuLumina account, but the character limit would not give me the power of voice I need.

Here is my concern. Lutris is a powerful platform for gaming on Linux. It is the most popular, and until now probably the most respectable. While you may or may not have reason to hate RiotGames over the inclusion of the Vanguard anti-cheat, you are only hurting Linux overall. While I hate the anti-cheat changes myself, only you are in the wrong.

I understand the game developer is pushing against Linux users, but saying "Fuck you" to the company isn't going to help. All you are doing is hurting the Linux community, and while you do a lot of good work, this Tweet has a lot of power against the Linux community. This might not hurt the Linux community now, or maybe soon, but it will if attitudes like this keep up. Linux can never grow if we yell at the people who push away our platform. We need to work with these corporations, and not insult them. You gave our enemies ammo. If you do not publicly apologize, if you don't even delete the tweet, so be it. Just don't come crying to the community when you yourself refuse to make changes to the attitudes that hurt the whole community.

Backend Essentials-Jack of all trades OR King of one?

htmx is Old but Gold

KaiLikesLinux
I am Kai Lyons, a general OS enthusiast, programming language fanatic, and domain extension guru. I have weird hobbies. I founded, fund, and work on Fivnex related projects
Tutorial for making an Ubuntu fork. JS: Functions inside Constants, When, How, and Why to use them
#javascript
Should You Use Python? 5 Pros and Cons.
#python