If you have an interest in Web development and building APIs, understanding the concepts of HTTP is vital.

In this article you are going to learn the following:

HyperText Transfer Protocol (HTTP) is a stateless, connection-less, request-response protocol that consists of rules which define communications between clients and servers connected over an established Transmission Control Protocol (TCP) connection

Before delving any further, let's define some basic terminologies which will be mentioned in the article.

Although HTTP itself is stateless, there's a need to share state between multiple HTTP requests. HTTP cookies make it possible for the use of stateful sessions.

To understand the HTTP process, let's ask ourselves, what actually happens each time a user types a URL into a browser in order to open a new webpage. Well the most simple answer is;

This process is called the Request-Response cycle.
Let's take it one step further.

Let's say we want to access the explore page on hashnode.com by entering the following URL into the browser

The URL is made up of;

This process of DNS Lookup only occurs when the HTTP request is made.

When a client initiates an HTTP request to the server, it performs the following steps;

This process is illustrated below. 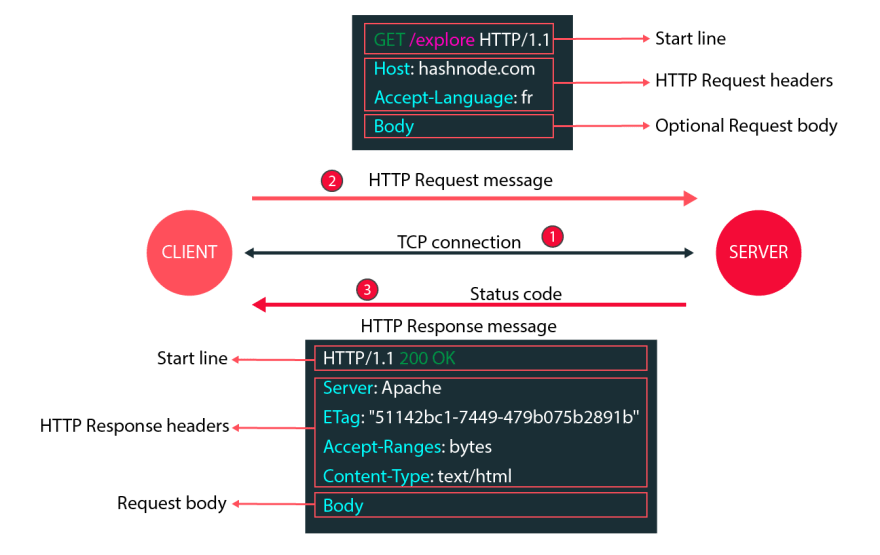 There are two types of HTTP messages;

The request message consists of the following;

The response message consists of the following;

HTTP uses methods to define the operation to be applied to the resource identified by the Request-URI. These methods are usually verbs, with the most widely used methods being POST, GET, PATCH, and DELETE. Each of these HTTP methods returns a success or failure upon completion of their operations, using status codes to represent success or a failure.

The status codes are used by the client to determine if the HTTP request sent to the server, along with the specified operation was a success or a failure, remember the operation is specified by using the HTTP method.
The status code is a 3 digit result code, with the first digit defining the class of the code.

You can read a lot more about status codes here

I hope you found this article useful and helpful, if you have any questions let me know in the comments. In a later article, we are going to learn how to implement and use these concepts in building a Rest API. That's it for now 👋

Once suspended, kaid00 will not be able to comment or publish posts until their suspension is removed.

Once unsuspended, kaid00 will be able to comment and publish posts again.

Once unpublished, all posts by kaid00 will become hidden and only accessible to themselves.

If kaid00 is not suspended, they can still re-publish their posts from their dashboard.

Once unpublished, this post will become invisible to the public and only accessible to Azamah Jr.

Thanks for keeping DEV Community 👩‍💻👨‍💻 safe. Here is what you can do to flag kaid00:

Unflagging kaid00 will restore default visibility to their posts.