Zeebe is a new workflow engine for microservices orchestration. It has first-class support for clients written in JavaScript via zeebe-node.

This article was originally published on the Zeebe blog.

Message correlation is a powerful feature in Zeebe. It allows you to target a running workflow with a state update from an external system asynchronously.

This tutorial uses the JavaScript client, but it serves to illustrate message correlation concepts that are applicable to all language clients.

We will use Simple Monitor to inspect the running workflow state. Simple Monitor is a community-supported tool, and is not designed to be used in production - however, it useful during development.

Here is the basic example from the Zeebe documentation:

Use the Zeebe Modeler to open the test-messaging file in this project.

Click on the intermediate message catch event to see how it is configured: 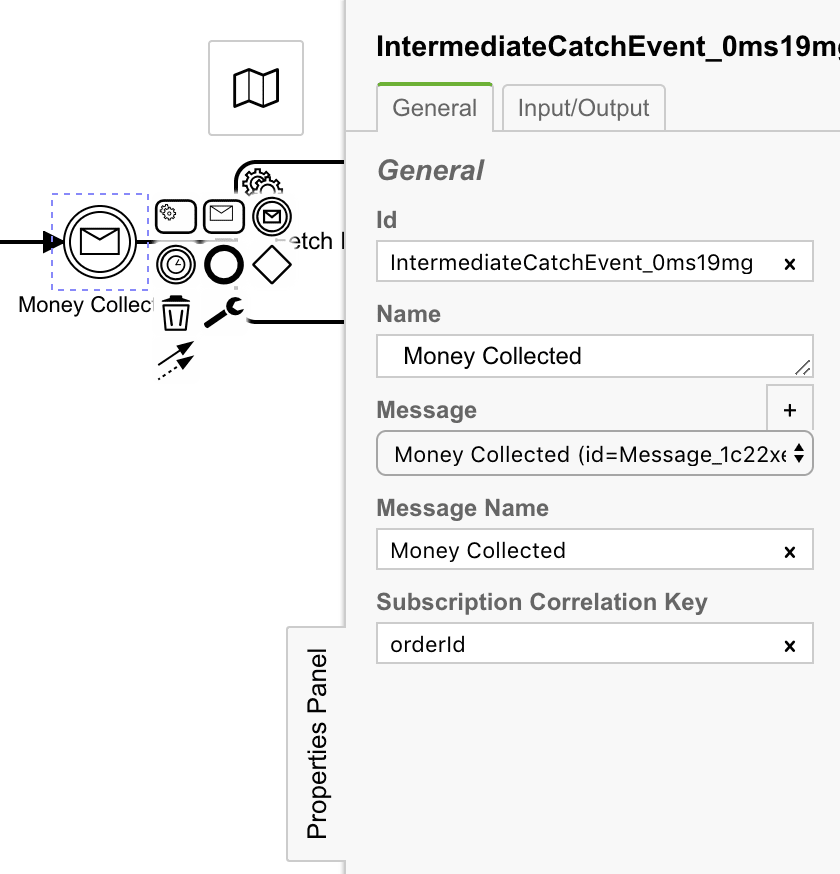 A crucial piece here is the Subscription Correlation Key. In a running instance of this workflow, an incoming "Money Collected" message will have a correlationKey property:

The concrete value of the message correlationKey is matched against running workflow instances, by comparing the supplied value against the orderId variable of running instances subscribed to this message. This is the relationship established by setting the correlationKey to orderId in the message catch event in the BPMN.

This starts a workflow instance with the orderId set to 345: 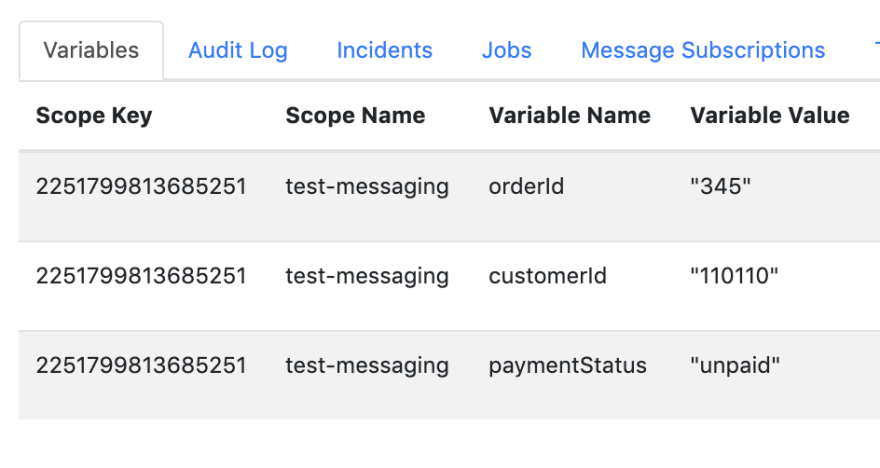 You can see that this workflow instance has the variable orderId set to the value 345.

Now the token is at the message catch event, waiting for a message to be correlated.

You can see that the broker has opened a message subscription for this workflow instance with the concrete value of the orderId 345. This was created when the token entered the message catch event.

The "Message Subscriptions" tab now reports that the message was correlated:

Messages are buffered on the broker, so your external systems can emit messages before your process arrives at the catch event. The amount of time that a message is buffered is configured when publishing the message from the client library.

For example, to send a message that is buffered for 10 minutes with the JavaScript client:

Here is how you can see it in action:

A couple of common gotchas:

For example, the interrupting boundary message event in the following example will not be correlated on the updated value, because the subscription is opened when the token enters the subprocess, using the value at that time:

Message Correlation is a powerful feature in Zeebe. Knowing how messages are correlated, and how and when the message subscription is created is important to design systems that perform as expected.

And Simple Monitor is a useful tool for inspecting the behavior of a Zeebe system to figure out what is happening during development.

Basics of Signals and Systems