tl;dr: The marvels of the modern world aren't possible without the contributions of us all. YOU are important. Your role is vital. So is everyone else. Let's treat each other that way.

My wife received news that her father, Brendan, was in hospital and about to pass away from a very aggressive type of cancer. He would soon be sent home for palliative care. My mother-in-law, Carmel, was not in the best of health either and was not able to take care for herself, let alone Brendan. So, we rushed to England with our boys to take care of them both.

Brendan was brought home from hospital late Thursday, December 17th. For several days, many family members took turns caring for him while several hospice care nurses came in and out to monitor and assist. At some point, the hospital he'd been at called us with some bad news. The ward Brendan had been in for several weeks had a bad COVID outbreak. The doctors suspected Brendan had been infected as well. We were advised to take additional precautions. Sadly, Brendan died on December 19.

Within a few days, we realized that eight family members that had brought food or helped care for Brendan had COVID - including me, my wife, our two boys, and Carmel. The next few days were pretty miserable with us all sick and suffering with grief.

My wife and I were asleep in bed, still sick with COVID. An unusual noise startled me from my sleep. Then, I heard it again. My phone was alerting me to something, but the sound was only vaguely familiar. I ignored it and waited to drift off to sleep again. As the sound repeated a third time, realization dawned on me that it was the ring tone for the Be My Eyes app. Someone with limited vision was using the app to ask for help.

I snatched up my phone and answered the call, "Hello. I'm Justin. Can I help you with something?" The caller explained she was trying to find a snack in her pantry. She was blind and unable to tell the difference between several different bags of chips (crisps if you're in England). She turned on her camera to let me see her pantry. I was able to tell her which bag had the flavor she wanted. When I confirmed she didn't need any more assistance, I told her I was happy to help and hoped she'd have a Merry Christmas. She told me it wasn't Christmas yet for her. She explained she was in Alaska where it was Christmas Eve and about 11:30 pm. She'd just finished wrapping presents for her little kids and wanted to relax a bit with a snack before going to bed. She asked where I was, and I answered, "London, Englad". We exchanged more pleasantries and then said goodbye.

Later in the day, our Christmas "celebrations" consisted of sitting on Carmel's bed while our boys each opened the one present I had brought with us. As we were all sick, we couldn't be bothered with a meal and spent most of the day in bed. Despite this being a less than cheerful scenario, I was actually elated that I'd helped someone earlier in the day with what to me was such a simple task.

NOTE: This next portion is written from the perspective of technology. However, don't stop reading if you're not in that sector. Everything I describe here applies to anyone in any job or home life position.

The Wonders of Technology

Over the next few days, with nothing much more to do, I started to really think about what had transpired that Christmas morning.

A blind person 4500 miles away had picked up a phone, placed a "call", was able to share video of her home, and get some assistance with such a "mundane" task from a complete stranger.

On previous Be My Eyes calls, I had helped a caller find the puke her cat had left on her carpet, helped a person select a can of green beans from their cabinet, and assisted someone with reading a portion of a letter.

I've only assisted with Be My Eyes about 4 or 5 times. However, there are 6 million volunteers and 500,000 blind and low vision people using the service - all for free.

Those of us in the technology industry probably have a good idea of the scope of people, job functions, tools, and material required to make this and many other near-miracles happen.

Without any one part of the chain, none of this could have happened. With no radio engineers, the phone couldn't connect to cellular networks or WiFi. With no software developers, the Be My Eyes app wouldn't exist nor would the databases nor servers that the app relies on. With no silicon, the computer chips would not exist for the phones or servers involved in this service. Literally hundreds of job functions and millions of workers were required for me to assist someone in picking a bag of Flaming Hot Cheetos rather than a bag of Doritos.

Thanks to millions of other people, I was able to help someone on Christmas Eve relax and just have a slightly more pleasant life.

Without (all of) Us

Over time, I thought about this more. Above, I only mentioned the technology aspects of that near magical call. Looking a little deeper, it's clear that hundreds of millions, actually billions, of people made that "simple" phone call possible.

I could go on and on with the chain of workers that help us live everyday. If you look between the "Truckers" and "Grocers" section above, you could add hundreds of other sub functions. Then, you could split each of those dozens of ways.

The point is that it takes all of us to make the world work. There are no "Essential" or "Vital" workers. Without all of us , the world stops working. We all"make the magic happen".

Many times in my life, I've heard people say something like, "I'm just a ..." or "I only do ...". It's like they are ashamed of the work they do. These people have been friends, coworkers at multi-billion dollar companies, or casual acquaintances.

In the past, I've agreed with them and even said the same thing myself. It can be a bit humbling to have a less than glamorous role in a group of peers that seem to make "the magic" happen. Working as a bagger in a grocery store can seem less important than helping to launch a space ship.

"In the beginning", humans had only one job. They had to feed themselves. Anyone that didn't participate in the job of hunting or gathering, didn't eat and didn't survive long.

Despite these specializations, every person on earth still has one primary job - to feed themselves. However, now, they outsource it to billions of other people so they can focus on their specialty. No single role is more important than any other. We all play an essential role in ensuring goods, services, and health care are available worldwide.

If you're "just" the cashier, administrative assist, accountant, barista, sailor, homemaker, salesperson, cook, CTO, cotton picker, designer, planner, etc., you are a linchpin in the entire process of the world. If you stop doing your secondary job, each of those specialists will begin to slow down. If you walk away from your phlebotomists role, people start dying! Instead of having their clothes dry-cleaned, they'll need to wash them at home. House cleaners all start farming? That CEO has to start to vacuum themselves. Eventually, as more and more "secondary" jobs are abandoned, everyone has to revert to their primary job of feeding themselves. The world would devolve into chaos.

The world needs you in whatever capacity you provide. You are important. Your job is vital. Those rockets aren't going to launch themselves!

But I'm just a cashier in a coffee shop.

If you "just" numbly ring up purchases and hand coffee across the counter, then you really are "just" a cashier. If you instead greet each customer with a smile, wish everyone a good day, and learn to greet returning customers by name, you are much more. You're an ambassador to everyone's morning. You build good will for your company. More importantly, you can set the tone for all your customers' days. Greet them with a kind friendly smile, and they'll walk out of that coffee shop ready to take on the world. They'll have a smile on their face, and they'll return your courtesy to others. It's infectious! Go spread the disease!

But I'm just a housekeeper.

No, you're not. You're a household maintenance expert. Your employer(s) leave(s) their house knowing the mess they left behind will magically get taken care of. They won't dread their afternoon because of thoughts of returning home to a mess that they have to deal with.

It's so easy to denigrate ourselves and for others to do the same to us. Learn to get out of this mindset trap. Figure out what you can do in any role that helps someone else in their role. You have to be at your job anyway. Why make it miserable for you and others? If you can do this routinely, you just might find you will no longer "just" be "X" because you've been promoted to "Y".

P.S. Now that we see how everyone is equally important, let's please start treating each other that way. There are no "peons". No job is worthless or meaningless. Please don't be condescending to the accountants, waiters, nurses, or bell boys you encounter each day. Don't yell at management because someone didn't do something "just so". Be pleasant to everyone you interact with. If possible, put a smile on their face. Your kindness will make it easier for them to deal with so many others that are less than pleasant.

Keep in mind that if your rudeness causes someone to get fired or to quit, you might soon regret it ... Someday you may discover they are much better at hunting and gathering than you are. 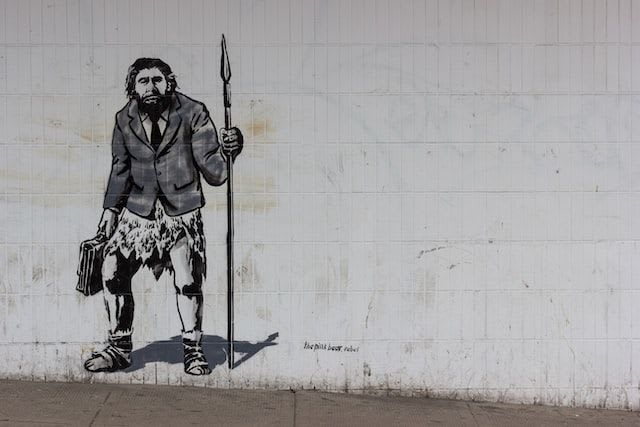 Photo by Crawford Jolly on Unsplash

Once suspended, justinnoel will not be able to comment or publish posts until their suspension is removed.

Once unsuspended, justinnoel will be able to comment and publish posts again.

Once unpublished, all posts by justinnoel will become hidden and only accessible to themselves.

If justinnoel is not suspended, they can still re-publish their posts from their dashboard.

Once unpublished, this post will become invisible to the public and only accessible to Justin Noel.

Thanks for keeping DEV Community 👩‍💻👨‍💻 safe. Here is what you can do to flag justinnoel:

Unflagging justinnoel will restore default visibility to their posts.