Side Note: this post was inspired by this StackOverflow question

Let's talk about the below behavior:

If you look carefully at the above animated gif you'll notice 2 important things about the displayed form behavior:

A static image will help us to better understand the scenario: 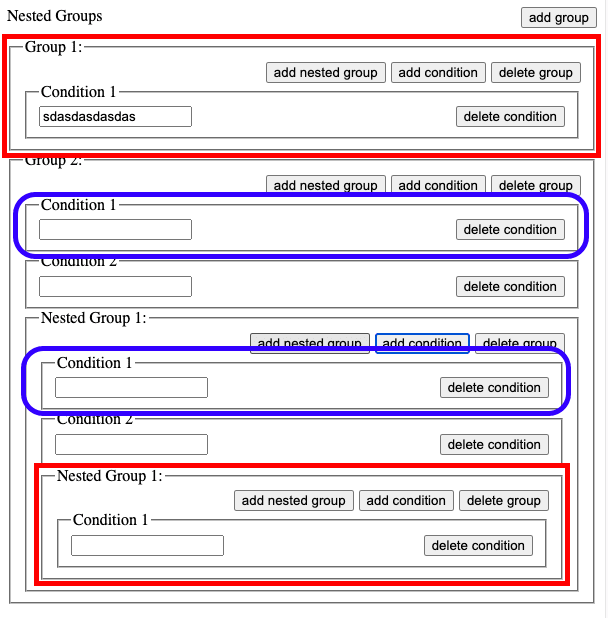 I've highlighted some repeating parts on the form above. The red parts are very interesting, so take your time looking at them. Have you notice something with them? It's recursively nested. You can see that Group 2 has a Nested Group 1 inside it and both of them are structurally identical. In fact, Group 2 and the Nested Group 1 have the same elements: conditions and the same action buttons bar.

How would we build up a dynamically, recursively nested form like the one shown in the image above? What if we want to create and fill-up the form based on some data you load from a server? Keep reading and we'll get there in a minute.

The complete code discussed here is available at Stackblitz.com:

We'll build the following structure (in this "pseudo component tree" each label started with app represents an angular component):

In the above pseudo component tree, app-group-control is an angular reactive form that contains an action bar and 2 FormArray controls: conditions and groups.

Let's dive a little in each part of this component.

Inside app-group-control the first thing we'll find is this action bar (ActionButtonsBarComponent in Stackblitz demo) that allows us to:

This is a very simple component with 3 @Ouput()-decorated properties:

The condition component (ConditionFormComponent in Stackblitz demo) is also a very simple component. But, it has an important thing you should notice: it implements the ControlValueAccessor interface.

The ControlValueAccessor interface is what makes it possible for you to turn your components into angular FormControls. And like any FormControl, they can be part of forms (for example, they can receive the formControlName directive and be controlled by the available @angular/forms utilities and methods).

The ControlValueAccessor is also, what make it possible for us to nest forms in the most possible simple way. I've seen a lot of people doing crazy things to nest forms, like passing the parent FormGroup to a child component in order to reuse it in the child component's form. Maybe it's a matter of style, but I'd strongly recommend anyone to just turn that child component (that contains the nested form) into a FormControl. By doing that you'll be flattening the form's structure. I'd suggest two Kara Erickson videos if you want to learn more cool stuff about angular forms. Finish reading this post and, after that, scroll your page back to check out these amazing videos.

Finally we have this wrapper component, that contains the form that wraps everything (GroupControlComponent in Stackblitz demo).

Basically, its template is:

If you check the code in Stackblitz, you'll notice that <app-condition-form> has its own form inside. <app-group-control> also has its own form (we're actually looking at it in the code above). Thanks to ControlValueAccessor, nesting these two forms inside a parent form was a piece of cake. Take a look again... we're not only nesting two forms in a completely transparent way, which would be a huge achievement per se. Considering that conditions and groups are FormArrays, we're, in fact, nesting an indefinite number of forms inside the parent form, without the need of any hack, using a simple, clean and robust approach. Pretty cool, don't you think?

Create the form based on incoming data

As a part of the implementation of the ControlValueAccessor interface, we implemented the writeValue(...). It is called by angular whenever the FormControl.setValue() or FormControl.patchValue() is executed by the host form. And this is a perfect place to analyze the incoming data and create/remove/fill-up controls of our form according to the incoming data.

If you take a look at this modified stackblitz demo, you'll see how we can achieve this with two tiny snippets (both of them in the writeValue(...) functions of the GroupControlComponent):

So, in the AppComponent (in the demo), when we call this._form.patchValue(data); in the buildFormFromData() method, our form is built automatically to accommodate data in the right fields. With ControlValueAccessor in place, this was pretty easy, wasn't it?

If you try to build this same form without angular ControlValueAccessor, I can guarantee you painful headaches during all the process. For some reason, the ControlValueAcessor is one of the most underestimated angular features among developers. Not using it makes the overall process of building complex forms an overwhelming task.

Give my schematics library a try

BTW, I've built an schematics libray that generates the skeleton of a component with the ControlValueAccessor implementation for you. If you want to, fell free to try it in your projects (it's a devDependency, so it won't add any nano dependency to your project): https://www.npmjs.com/package/@julianobrasil/schematics-components

Adding Animated Illustrations to an Angular App with Lottie (ngx-lottie)