We may agree that we lie to ourselves once in a while. I remember thinking of:

I'll never put my code on a public repository since it's a freelance project maintained only by myself.

The truth is, anything can happen in life.

Month to month I use S3 from AWS to store photos and documents from several apps I got on production and also use Route 53 to route the domain with the app itself. My monthly bill is about 1 USD. Yep, that's almost nothing, but this month (april last year) I had to pay 14,267.86 USD (well at least that's what my bill says)

On april 13th (a sleepy Monday), it was like 10:00 in the morning when I got a happy email from Amazon Web Services giving me the welcome to EC2 services. By the time I received that email I neither know the existence of that service. That made me wonder if I had received that email by mistake or if my account … had been hacked. 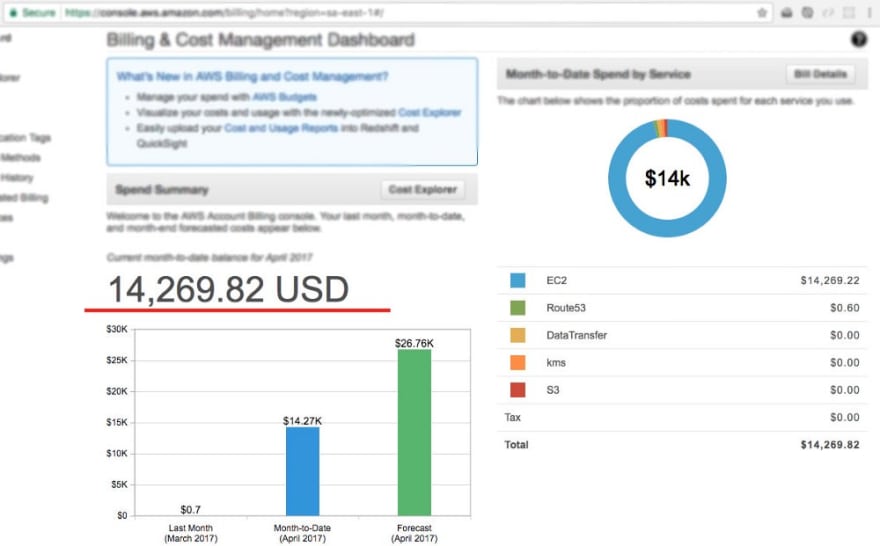 Minutes later I wrote a message to AWS support asking about that email and they answered me very quickly and called me like five times in less than 48 hours. They told me that my account may had been compromised, and gave me some list of things to do in order to strengthen my account security and to avoid further EC2 service usage. I deleted all access keys I was using, added multi-factor authentication and changed my password. (I'm not endorsing or promoting AWS but I have to say that the guys from AWS support were extremely kind and useful in this case)

It all started in a boring weekend (at least this is what I believe). I was on the chat with a friend telling him about a side-project I had been working on. And suddenly I decided to put my code on github to show him off all the stuff. It was up, in the web, for like 10 minutes max, after I switched it to be hosted on gitlab to make it private. Two days later I received that email from AWS I told you before.

What happened?
A file containing my AWS credentials hadn't have been ignored in git, so when I pushed my local repository it all, even my credentials, went online in github (for couple of minutes, but they were there).

Suggestion
Please, store your credentials secretly ALWAYS. You can use environment variables for storing access keys and credentials that may compromise your accounts or bills. And never think of a local repository only, when everyone knows that nowadays the internet is all over around.

How this happened?
Since you can list all public repositories on github, I imagine of a job/task/process/program running constantly and cloning each project and looking for .yml files and keywords like "KEY" or "ACCESS_KEY" or something like that. This is only my thought of how could this happen. If it happen like so, it makes me sad of how people can be malicious and with no concerns of consequences of their acts.

TL;DR
Never leave your api keys on public repositories (always check before uploading)
Take a look at your email frequently and don't take a single email as a mistake
Be a hacker so you can track and catch the guys who stole your keys (well that's only a dream)

Hope you have a good day!
(If you're still wondering, no, I didn't have to pay for what I didn't use)

How to prepare for AWS Certified Solutions Architect — Associate exam

Once suspended, juanmanuelramallo will not be able to comment or publish posts until their suspension is removed.

Once unsuspended, juanmanuelramallo will be able to comment and publish posts again.

Once unpublished, all posts by juanmanuelramallo will become hidden and only accessible to themselves.

If juanmanuelramallo is not suspended, they can still re-publish their posts from their dashboard.

Once unpublished, this post will become invisible to the public and only accessible to Juan Manuel Ramallo.

Thanks for keeping DEV Community safe. Here is what you can do to flag juanmanuelramallo:

Unflagging juanmanuelramallo will restore default visibility to their posts.