Hi there! This is the first of a series of articles about how I made Ned Snow, a stealth WebVR game about infiltrating a prison guarded by robots. I made Ned Snow in a month for the js13k competition, a game jam for web developers to make javascript games under 13kB.

Before continue with the article I strongly recommend you play the game here: http://js13kgames.com/entries/ned-snow because at the end of the article you will find some spoilers and Easter eggs.

In this article I won't dive into programming, instead I'll focus on design, arguably the most important part of game creation. I'll lay out what design decisions did I take and why, and how they affected the final result.

When I started to think ideas for the game, the first thing that came to mind was a shooter, but shooters are really common so I pushed that idea out of my mind and kept thinking... thinking about what VR brings into the table: immersion, scale, the ability to perform physical actions like grabbing, throwing, crouching, leaning, etc. In the end I had two ideas, a cards game like Yu-Gi-Oh, or a stealth game inspired by a fragment of the game INSIDE (image below). I actually played the game again just to reach that part and capture the feeling of it. 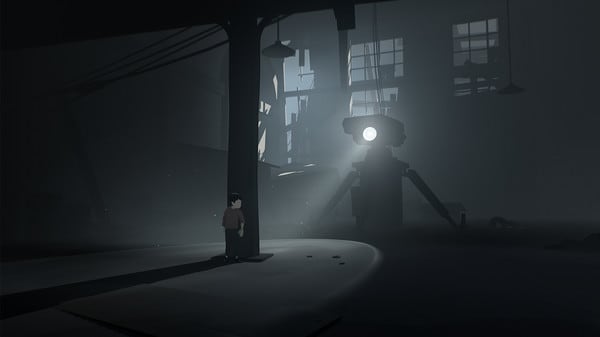 When the theme was announced as "404 Not Found". I went with the stealth idea, I enjoyed the aspect of crouching and hiding, sticking out your head to assess the terrain and go back to hide.

There were many factors that determined design aspects of the game apart from the limited size.

The game had to work on PCs and phones

VR headsets are not cheap, specially in South America, they are a luxury, not a necessity. Besides I wanted to share the game with my friends, but none of them own a VR device.

The web is universal, and platform agnostic, it makes sense that web games share those same attributes. I didn't want people to lose the opportunity to play just because they didn't have a headset. It was important to define this from the beginning because as you will see, supporting a new platform requires a good amount of work.

Movement in VR can easily produce motion sickness, because you see yourself moving through space but in real life you are standing in one spot. Of course I didn't want anybody to feel sick because of my game, so I settled with a teleport movement. Teleport came with its own issue, if you teleport immediately it will be really confusing, that's why I added a small blink just like in Half Life Alyx

But the movement chapter doesn't end here, because I had to actually design two movement systems! One for VR and another for PCs.

Properly supporting a platform requires supporting its input methods, for VR is a controller, for mobile is gyroscope and screen touches, and for desktop is mouse and keyboard. So I implemented a WASD standard movement and SPACE to crouch, as I wanted to make crouch a primary action in the game. This led me to write my own collision system so players couldn't pass through walls. In the end supporting different platforms helped me discover more bugs and made the game better.

Ned Snow is a dark game where you move in the shadows. 13kB makes you really creative about how to manage game assets, I decide to create everything from code, so I went for a low poly style (easy to describe in a few lines of code). The robot is made of three shapes and the level are boxes joined into one geometry.

Textures (along with audio) were one of these things that instantly improve the game once I added them. All textures were created using the Canvas API. 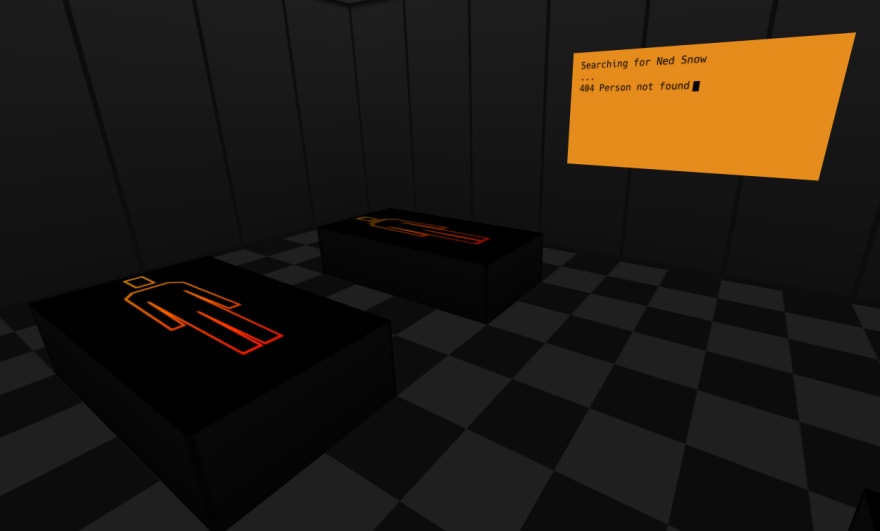 Same as 3D models and textures, audio had to be created through code, there are some small libraries I could use, but most of them produce 8 bit sounds, and retro didn't really fit the theme of Ned Snow. I joined forces with my good friend Sergio who helped me synthesize the sound of a Piano, we created a basic sequencer inspired by TinyMusic and Sergio took care of creating a tense background music which made a huge difference reinforcing the experience. He created 3 melodies and every level the game picks up randomly one of them, changes are you didn't even notice. Good design is the one that you don't notice.

I love storytelling, to capture someone in a world and let him discover slowly where he is, what happened before and why is he doing what he is doing. I chose to expose information through terminals in big screens across the map, because that way it feels like the it is part of the world, I didn't want floating UIs that could break immersion and didn't fit the theme. 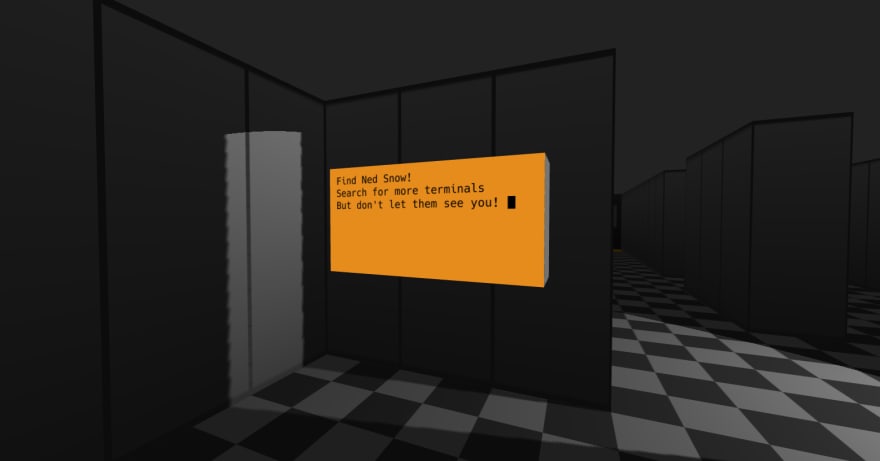 I also added some Easter eggs related to the theme:

Finally I also wanted to try the web monetization API, after all the work I put in here it would feel good to earn some money. When monetizing a game is really important to avoid the pay to win strategy, because is the faster way to kill a game. Instead, Coil members had access to more content, through pages from the diary of subject 406. I was inspired by the Portal 2 comic which doesn't affect the game in any way, but gives you a story to enjoy. And at the end of the game Coil members had a different ending were they did not only liberated Ned Snow but also all other prisoners of Facility 502.

For those of you who are not Coil members, I know you want to read the rest of the story, so as a reward for sticking to the end here is the transcript:

Thanks for reading. I will post another article diving into programming and more technical stuff. So follow me if you want.

Should You Be Solopreneur or An Entrepreneur?

I get an error when I run actions, .github/workflows/snake.myl

Once suspended, juankz will not be able to comment or publish posts until their suspension is removed.

Once unsuspended, juankz will be able to comment and publish posts again.

Once unpublished, all posts by juankz will become hidden and only accessible to themselves.

If juankz is not suspended, they can still re-publish their posts from their dashboard.

Once unpublished, this post will become invisible to the public and only accessible to Juan Carlos.

Thanks for keeping DEV Community 👩‍💻👨‍💻 safe. Here is what you can do to flag juankz:

Unflagging juankz will restore default visibility to their posts.