React Native is a popular cross-platform JavaScript framework. Components of React Native apps are rendered in Native UI. In this article, we will focus on the security side of the framework.

In React Native, the communication between Native and JavaScript code is handled by a JavaScript Bridge. The source JS files are compiled into one single bundle file known as entry-file. In development mode, the file is bundled on a local server and fetched by the application. For production, the application logic is usually bundled in a single file, usually index.android.bundle or index.ios.bundle. Similarly to Cordova, the bundle file is present in the assets folder and, as also happens with Cordova, we can assume React Native apps as containers that run JS code. This logic is implemented in expo. Under certain limitations, Expo can run different business logic in a single application. At this moment, it's fair to assume the entry-file as the core application logic.

We will be dividing the article into the following sections:

Usually, smartphone apps communicate with the backend server via APIs. Insecure Communication is highlighted in the OWASP Mobile Top 10 at #3:

Mobile applications frequently do not protect network traffic. They may use SSL/TLS during authentication but not elsewhere. This inconsistency leads to the risk of exposing data and session IDs to interception. The use of transport security does not mean the app has implemented it correctly. To detect basic flaws, observe the phone's network traffic. More subtle flaws require inspecting the design of the application and the applications configuration. - M3-Insecure Communication.

Starting from iOS 9 and Android Pie, SSL is required by default. We can enable cleartext traffic but it's not recommended. To secure the connection further, we can pin our server certificates.

Apps are dependent on Certificate Authorities (CA) and Domain Name Servers (DNS) to validate domains for TLS. Unsafe certificates can be installed on a user device, thereby opening the device to a Man-in-the-Middle attack. SSL pinning can be used to mitigate this risk.

We use the fetch API or libraries like axios or frisbee to consume APIs in our React Native applications. However, these libraries don't have support for SSL pinning. Let's explore the available plugins.

To use HPKP (Http Public Key Pinning), we can consider these plugins:

Alternatively, we can use native implementations as outlined by Javier Muñoz. He has implemented pinning for Android and iOS natively.

Quite often, we store data inside our application. There are multiple ways to store persistent data in React Native. Async-storage, sqlite, pouchdb and realm are some of the methods to store data. Insecure storage is highlighted at #2 in the OWASP Mobile Top 10:

Insecure data storage vulnerabilities occur when development teams assume that users or malware will not have access to a mobile device's filesystem and subsequent sensitive information in data-stores on the device. Filesystems are easily accessible. Organizations should expect a malicious user or malware to inspect sensitive data stores. Usage of poor encryption libraries is to be avoided. Rooting or jailbreaking a mobile device circumvents any encryption protections. When data is not protected properly, specialized tools are all that is needed to view application data. - M2-Insecure Data Storage.

SQLite is the most common way to store data. A very popular and open-source extension for SQLite encryption is SQLCipher. Data in SQLCipher is encrypted via 256 bit AES which can't be read without a key. React Native has two libraries that provide SQLCipher:

Realm is a nice alternative database provider to React Native Apps. It's much faster than SQLite and it has support for encryption by default. It uses the AES256 algorithm and the encrypted realm is verified using SHA-2 HMAC hash. Details of the library can be found here.

Both iOS and Android have native techniques to store secure data. Keychain services allows developers to store small chunks of data in an encrypted database. On Android, most plugins use the Android keystore system for API 23(Marshmallow) and above. For lower APIs, Facebook's conceal provides the necessary crypto functions. Another alternative is to store encrypted data in shared preferences.

React Native has three libraries that provide secure storage along with biometric/face authentication:

Rooted and jailbroken devices should be considered insecure by intent. Root privileges allow users to circumvent OS security features, spoof data, analyze algorithms, and access secured storage. As a rule of thumb, the execution of the app on a rooted device should be avoided.

JailMonkey allows React Native applications to detect root or jailbreak. Apart from that, it can detect if mock locations can be set using developer tools.

SafetyNet is an Android-only API for detecting rooted devices and bootloader unlocks. We have covered SafetyNet extensively in a previous article. react-native-google-safetynet is a wrapper plugin for SafetyNet's attestation API. It can be used to verify the user's device.

Additionally, we can use react-native-device-info to check if an app is running in an emulator.

Earlier in the article, we mentioned how the application logic in entry-file is available in plain sight. In other words, a third-party can retrieve the code, reverse-engineer sensitive logic, or even tamper with the code to abuse the app (such as unlocking features or violating license agreements).

Protecting the application logic is a recommendation in the OWASP Mobile Top 10. Specifically, the main concerns include code tampering:

Mobile code runs within an environment that is not under the control of the organization producing the code. At the same time, there are plenty of different ways of altering the environment in which that code runs. These changes allow an adversary to tinker with the code and modify it at will. — M8-Code Tampering

Generally, most applications are susceptible to reverse engineering due to the inherent nature of code. Most languages used to write apps today are rich in metadata that greatly aides a programmer in debugging the app. This same capability also greatly aides an attacker in understanding how the app works. — M9-Reverse Engineering

Facebook introduced Hermes with the react-native 0.60.1 release. Hermes is a new JavaScript Engine optimized for mobile apps. Currently, it is only available with Android and it’s usage is optional. Hermes can be used in the project with react-native 0.60.4 by changing the enableHermes flag in build.gradle.

Its key benefits are improved start-up time, decreased memory usage, and smaller app size. One of the strategies that Hermes uses to achieve this is precompiling JavaScript to bytecode. At first glance, this appears to make entry-file unreadable. But let's look at a real example.

Let's assume that our entry-file is the one found below:

After Hermes compiles this file, the resulting bytecode can easily be decompiled using hbcdump and, among the decompiled code, we find some easy to read code:

So, while Hermes introduces a certain degree of complexity to the entry-file code, it doesn't actually conceal the code nor do anything to prevent code tampering, which means that it won't stop an attacker ⁠— let's not forget that this is not even the purpose of Hermes.

And this leads us to an approach that obfuscates React Native’s JavaScript source code to effectively mitigate the risk of code tampering and reverse engineering: Jscrambler.

By protecting the source code of React Native apps with Jscrambler, the resulting code is highly obfuscated, as can be observed below: 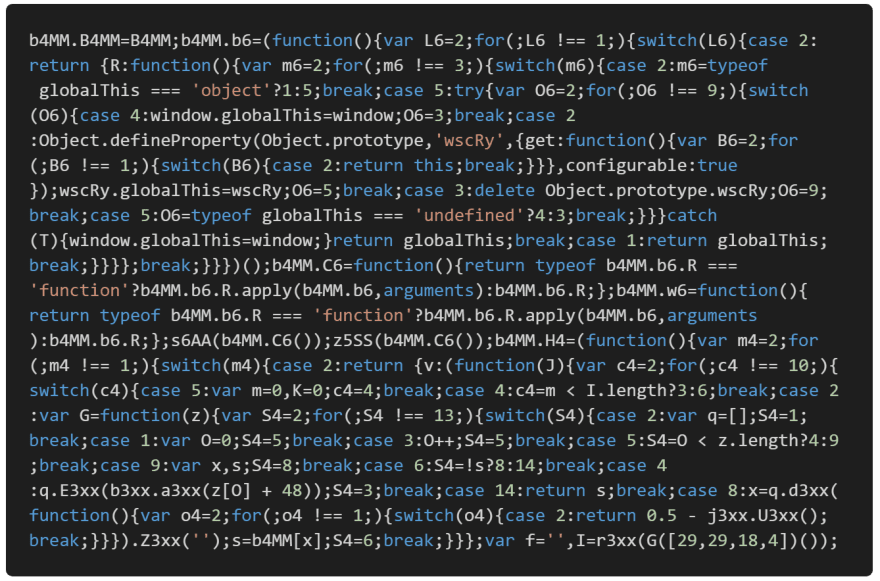 On top of this obfuscation, there's a Self-Defending layer that provides anti-debugging and anti-tampering capabilities and enables setting countermeasures like breaking the application, deleting cookies, or destroying the attacker’s environment.

To get started with protecting React Native source code with Jscrambler, check the official guide.

This article provides an overview of techniques to harden a React Native application.

Developer surveys show that React Native is still a framework of choice, even among development teams of large enterprises.

It’s then crucial to create a threat model and, depending on the application’s use case, employ the required measures to ensure that the application is properly secured.