In the previous post, we showed how we used MongoDB replication to solve several problems we were facing.

Replication got to be a part of a bigger migration which brought stability, fault-tolerance, and performance to our systems. In this post, we will dive into the practical preparation of that migration.

I noticed the lack of tutorials of setting up Mongo replication on Docker containers and wanted to fill this gap along with some tests to see how a Mongo cluster behaves on specific scenarios.

To improve our production database and solve the identified limitations, our most clear objectives at this point were:

When our applications were developed, there was no need to pass the Mongo connection URI through a variable, as most of the time Mongo was deployed as a microservice in the same stack as the application containers. With the centralization of Mongo databases, this change was introduced in the application code to update the variable on our CI/CD software whenever we need.

The keyfile is passed through a keyfile argument on the mongod command, as shown in the next step.

User authentication and role management is out of the scope of this post, but if you are going to use it, configure it before proceeding beyond this step.

Typically, in this step, you simply choose a server network port to serve your MongoDB. Mongo’s default port is 27017, but since in our case we had 4 apps in our production environment, we defined 4 host ports. You should always choose a network port per Mongo Docker container and stick with them.

At step 10, after having replication working, we'll only use and expose one port.

5. Assemble a cluster composed of 3 servers in different datacenters and regions

Preferably, set up 3 servers on different datacenters, or different regions if possible. This will allow for inter-regional availability. Aside from latency changes, your system will survive datacenter blackouts and disasters.

Why 3? It is the minimum number for a worthy Mongo cluster.

There are Mongo clusters with arbiters, but that is out of the scope of this post.

Adjust your priorities to your cluster size, hardware, location, or other useful criteria.

In our case, we went for:

We set the node which currently had the data with priority: 10, since it had to be the primary in the sync phase, while the rest of the cluster is not ready. This allowed continuing serving database queries while data was being replicated.

7. Deploy Mongo containers scaling to N* on a Mongo cluster

(*N being the number of Mongo cluster nodes).

Use an orchestrator to deploy 4 Mongo containers in the environment, scaling to 3.

In our case, this meant having 12 containers in the environment temporarily. 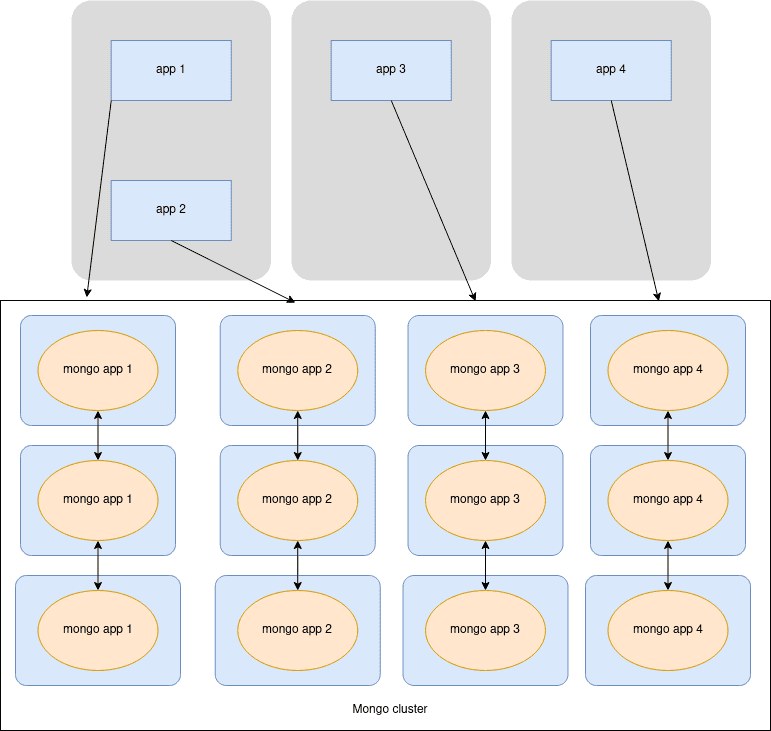 Remember to deploy them as replica set members, as shown in step 3.

This is the moment when we start watching database users and collection data getting synced. You can enter the mongo shell of a Mongo container (preferably primary) to check the replication progress. These two commands will show you the status, priority and other useful info:

When all members reach the secondary state, you can start testing. Stop the primary node to witness secondary promotion. This process is almost instantaneous.

You can stop the primary member by issuing the following command:

When you bring it back online, the cluster will give back the primary role to the member with the highest priority. This process takes a few seconds, as it is not critical.

If everything is working at this point, you can stop the Mongo instance on which we previously set priority: 10 (stop command in the prior step) and remove that member from the replica set passing its hostname as parameter.

Repeat this step for every Mongo container you had on step 4.

10. Migrate backups and change which server they read the data from

Previously, we had the application + database server performing mongodump of its data. As we moved the data to the cluster, we also moved the automated backup tools to a secondary member, to take advantage of said feature.

11. Merge data from 4 Mongo Docker containers into one database

If you only had 1 Mongo Docker container at the start, skip to step 12.

Besides having simplicity telling us to do this before step 1, we decided to act cautiously and keep apps and databases working in a way as close as they were before until we mastered Mongo replication in our environment.

At this stage, we chose to import data from all Mongo databases to a single Mongo database — the one which contained the most data. When working with MongoDB, remember this line from the official docs:

That means we can take advantage of mongodump --db <dbname> and mongorestore --db <dbname> to merge Mongo data into the same instance (this goes for non-Docker as well).

When you have merged your databases into the same instance, you will shut down other instances, right? Then, you will only need to monitor the application and perform backups of that same instance. Don't forget to monitor the new cluster hardware. Even with automatic fault-tolerance, it is not recommended to leave our systems short. As a hint, there is a dedicated role for that called clusterMonitor.

Sharing this story about our database migration will hopefully help the community — especially those not taking full benefits from MongoDB already — to start seeing MongoDB in a more mature and reliable way.

Even though this is not a regular MongoDB replication "how-to" tutorial, this story shows important details about MongoDB’s internal features, our struggle to not leave any details behind, and, again, the benefits of such technology. That's what I believe technology is for — helping humans with their needs.

In case you're also interested in learning more about application security, we recommend reading our free data sheet on JavaScript Security Threats, which provides an overview of the most relevant attacks to JavaScript apps and how to prevent them.

DevOps Is Not Automation

Will the Real Senior Dev Please Stand Up? (2021 Edition)