For the last month or so I've been documenting my development work. It's a reaction, in the artistic sense, to most development videos I've seen being similar to this one on most developer tutorials:

If you can't watch, it's similar to drawing an owl: 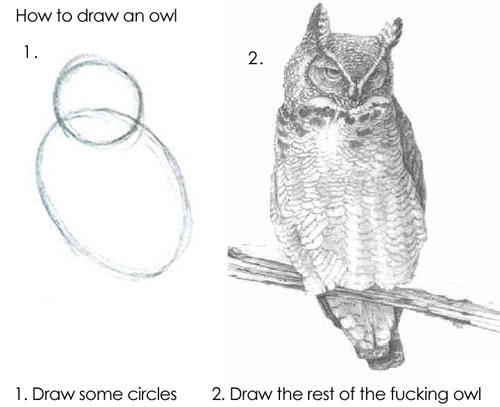 Even the tutorials that are honest tutorials can easily be criticized as contrived or "toy" apps. I honestly think that's why there was a boom of new todo apps for every platform circa 2010. Someone made a tutorial to show-off JavaScript, or Core Data, or whatever. Then a bunch of people watched them and said, "Dude! We should totally put this on the App Store."

In fairness, this is almost how I started learning development. Back in 2005 (after a few years already in) I bought a book on PHP + MySQL. From cover-to-cover it walked you through building a basic content management system. If you were paying attention the web at the time, then you know that there was an explosion in content management systems coming riding the wave of the user-generated-content Web 2.0 world.

Anyway. What I was, and still kinda am thinking, would be interesting. What if someone recorded themselves doing development?

No script. No plan. It had to mimic the real world environment as much as possible. A documentary.

When I say real code and frustration, I mean not these television and movie examples:

When I say real product I mean it leverages third party libraries, it may (does) generate other potential first-party open source libraries, and leverages multiple, disparate web-APIs including, but not limited to, Stripe, MailChimp, Eventbrite, and GitHub. Further, the platform is for my own company and used to simply or automate various manual processes currently in place for the three practitioners...real.

At an open space during Agile Midwest we were talking about learning and training of developers. We started lamenting over a lack of apparent desire and I mentioned this concept, saying something like, "It seems that watching videos of a developer write real code, for a real app, for a real company might just not be sexy enough for people to be engaged, which says a lot about expectation versus reality in the industry. You watch CSI or The Matrix and decide to become a developer only to realize it's actually not like that."

So, all that to say, that's what I'm trying out. I've been debating live-streams as I've seen some others in the community go that route on Twitch; however, there is a drawback with reality, I might need to edit out things like API keys, personal information, and so on.

And that's why I'm here. I would like to know: Does the above interest you? Would you watch videos, 30m to 60m in length of me developing this platform?

These are honest questions. I live and breathe from feedback (physical touch and words of affirmation are my two strongest love languages - doesn't have to be "you're the greatest thing since sliced bread," but crickets for what seems like an extended period becomes a problem).

I typically post to both Vimeo and YouTube at least every Monday. This publishing schedule quickly ramped up to every day as I can create seven or eight videos a day.

I will typically post the Vimeo link to Twitter and LinkedIn as that's where I think I have the largest developer-related following. I have started experimenting with what I call "Diff Developer" instead of "Unscripted Developer" where I basically spend 15m discussing the changes and decisions, leaving the option to have me produce the "Developer's Cut," which would be the full (series) "Unscripted Developer."

I really would like your feedback on this as the time I'm spending editing might prove to have a better ROI working on my next book, continuing to improve my current book, or refactoring and re-engineering the platform for the various 8fold properties: 8fold Pro, 8fold Media, 8fold Software, and the secret squirrel of 8fold Link.

Help me Dev.to community, you're my only hope (or, if nothing else, hopefully willing to give me honest feedback of any kind regarding the concept).

What makes Laravel framework the best choice for PHP development

Josh Bruce
Self-taught. Self-driven. Self-ish?? I tend to work from the human down, not from the metal up.
All the Nope: An Attempt at Extreme DRY and YAGNI
#laravel #php
The Frustrations of TDD, Composer, Laravel, and Package Development
#laravel #php #tdd #composer