I have been working on many projects that claim to be using the Hexagonal Architecture Style. All of them inspired this article because they have some interesting ideas or perhaps I didn't agree with the implemented structure (Business logic with Frameworks dependencies).

The goal of this post is to create an open-source artifact that exposes the fundamental ideas of Clean Architecture:

To keep the example simple: we create a basic Use-case where based on some resources and the authors/mentors mark them as optional or mandatory.

The HTTPie client in IntelliJ IDEA. 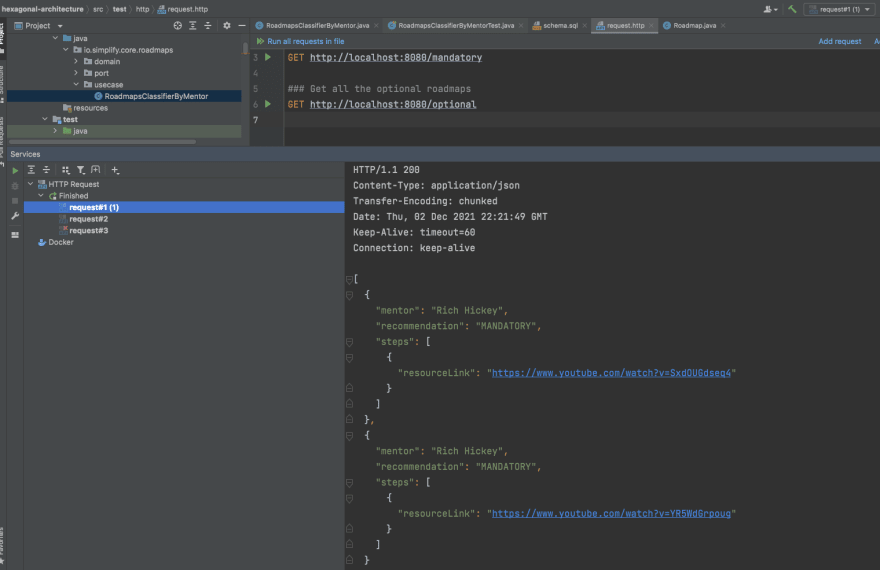 Good design in software is about the way in which we organize the code of the system to manage complexity. The idea is to create modular systems with high cohesion and low coupling, and after all, promote separation of concerns and allow some flexibility to evolve our systems.

They don’t have any outward dependency and are the fundamental part of the application. The same language that the business speaks.

They are the features or descriptions of what the users can do with our system. Actually, what we call the "Business logic".

They are the abstractions of what a user can do (Input ports), and any external integration, database, or low-level detail (Output adapter).

They are the implementation of the Ports. Low-level details, the database, the HTTP controller, the CLI, basically the glue between the users and the core of our business (use-cases).

The key tenets of onion architecture

If we need to change the database, ever the framework is easy. We just need to implement the DomainRepository class with another type of Database, for example, my preferred one: DynamoDB.

Build, Test and Deploy your Android Application📱 with GitHub Actions 🤖