Node.js is one of the most popular technologies nowadays to build scalable and efficent REST API's. It is also used to build hybrid mobile applications, desktop applications and even Internet of Things.

I have been working with Node.js for about 6 years and I really love it. This posts tries to be an ultime guide to understand how Node.js works.

The World Before Node.js

Web applications were written in a client/server model where the client would demand resources from the server and the server would respond with the resources. The server only responded when the client requested and would close the connection after each response.

This pattern is efficient because every request to the server takes time and resources (memory, CPU, etc). To attend the next request the server must complete the previous one.

So, the server attends one request at time? Well not exactly, when the server gets a new request, the request will be processed by a thread.

A thread in simple words is time and resources the CPU gives to execute a small unit of instructions. With that said, the server attends multiple requests at once, one per thread (also called thread-per-request model). 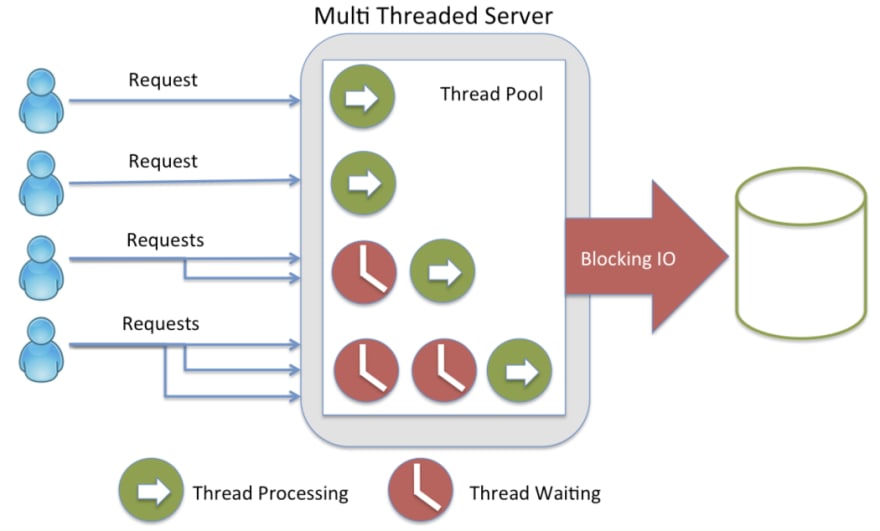 To attend N requests at once, the server needs N threads. If the server gets the N+1 request, then it must wait until any of those N threads is available.

In the Multi Threaded Server example, the server allows up to 4 requests (threads) at once and when it receives the next 3 requests, those requests must wait until any of those 4 threads is available.

A way to solve this limitation is add more resources (memory, CPU cores, etc) to the server but maybe it's not a good idea at all...

And of course, there will be technological limitations.

The number of threads in a server isn't the only problem here. Maybe you are wondering why a single thread can't attend 2 or more request at once? That's because blocking Input/Output operations.

Suppose you are developing an online store and it needs a page where the user can view all your products.

The user access to http://yourstore.com/products and the server renders an HTML file with all your products from database. Pretty simple right?

But, what happens behind?...

How slow are I/O operations? Well, it depends.
Let's check the table below:

Disk and Network operations are too slow. How many queries or external API calls does your system make?

In the early 2000s, servers and client machines were slow. The problem was about concurrently handling 10,000 clients connections on a single server machine.

But why our traditional thread-per-request model can't solve the problem? Well, let's do some math.

The native thread implementations allocate about 1 MB of memory per thread, so 10k threads require 10GB of RAM just for the thread stack and remember we are in the early 2000s!! 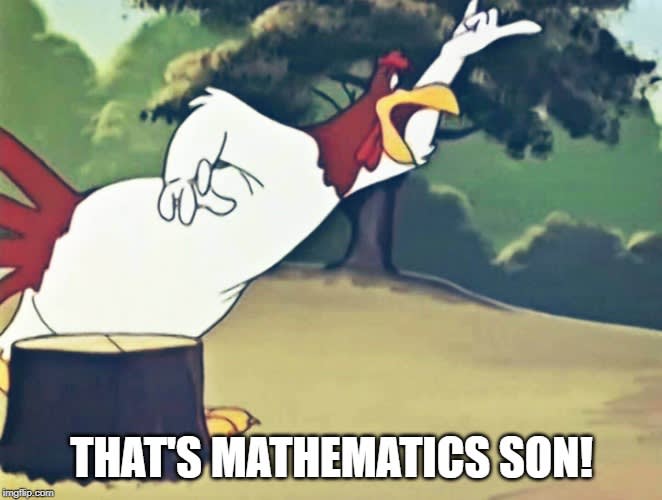 Nowadays servers and client machines are better than that and almost any programming language and/or framework solves the problem. Actually, the problem has been updated to handle 10 million clients connections on a single server machine (also called C10M Problem).

Javascript to the rescue?

Javascript server-side wasn't new in the early 2000s, there were a few implementations ontop of the Java Virtual Machine like RingoJS and AppEngineJS, based on thread-per-request model.

But if that didn't solve the C10K problem then why Node.js did?! Well, it's because Javascript is single threaded.

Node.js and the Event Loop

Node.js uses an event-driven, non-blocking I/O model that makes it lightweight and efficient. It's not a Framework, it's not a Library, it's a runtime environment.

Node.js is non-blocking I/O, which means:

If the requested url is /home then using fs native module we read the home.html file.

The functions passed to http.createServer and fs.readFile are called callbacks. Those functions will execute sometime in the future (the first one when the server gets a request and the second one when the file has been read and the content is buffered).

While reading the file Node.js can still attend requests, even to read the file again, all at once in a single thread... but how?! 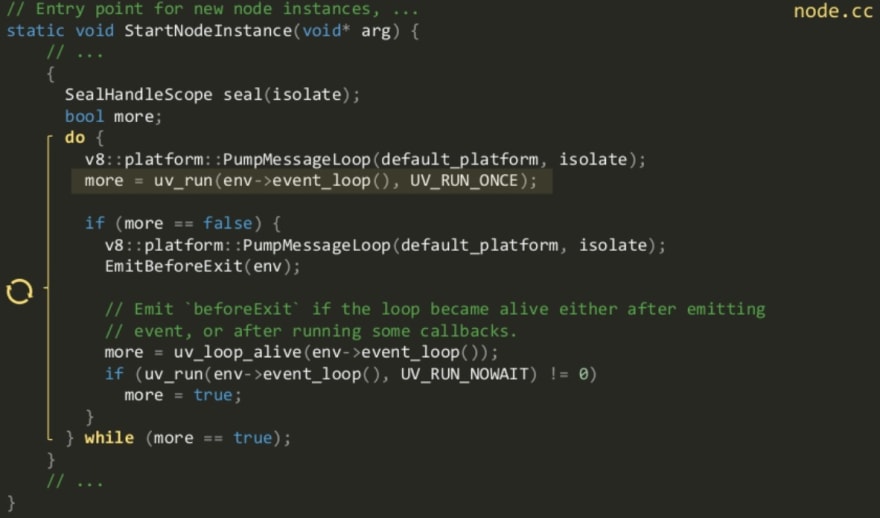 Libuv is a C library which implements this pattern and it's part of the Node.js core modules. You can read more about libuv here.

The Event Loop has six phases, the execution of all phases is called a tick. 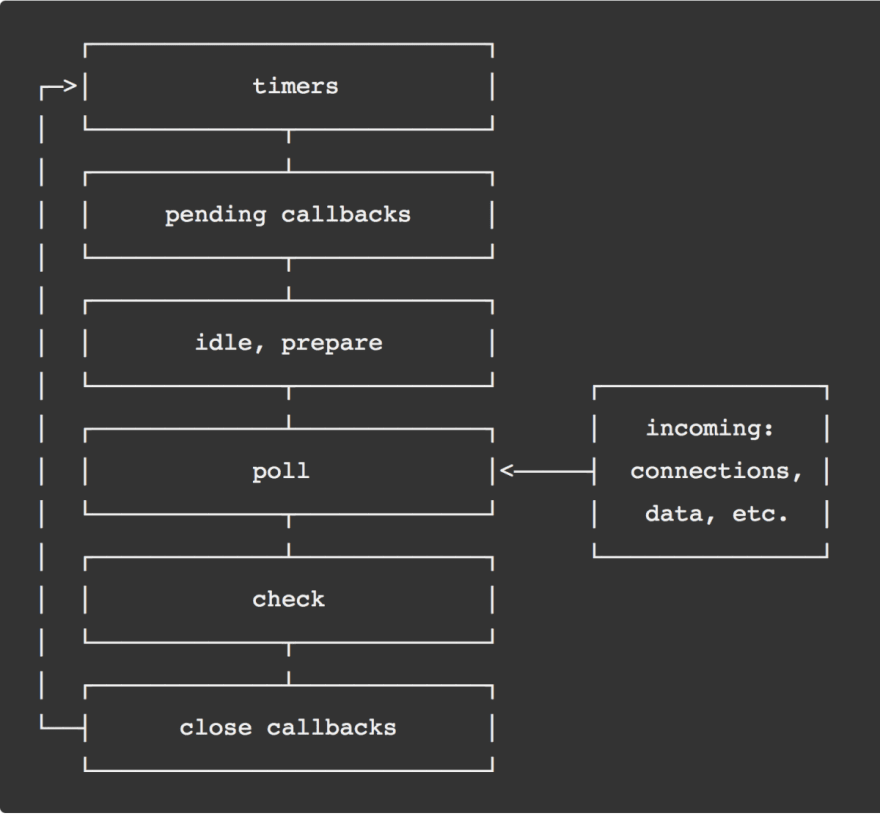 Okay, so there is only one thread and that thread is the Event Loop, but then who executes the I/O operations?

Pay attention 📢📢📢!!!
When the Event Loop needs to execute an I/O operation it uses an OS thread from a pool (through libuv library) and when the job is done, the callback is queued to be executed in pending callbacks phase. 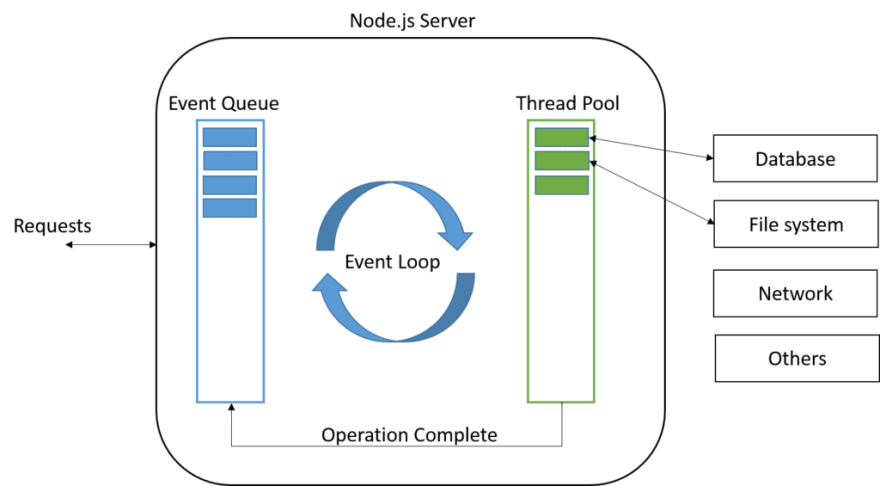 The Problem with CPU Intensive Tasks

Node.js seems to be perfect, you can build whatever you want.

A prime number is a whole number greater than 1 whose only factors are 1 and itself. 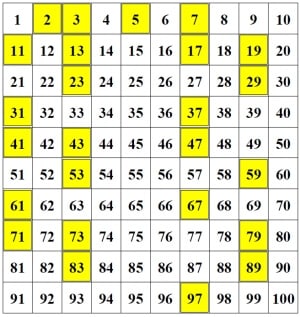 Given a number N, the API must calculate and return the first N prime numbers in a list (or array).

prime.js is the prime numbers implementation, isPrime checks if given a number N, that number is prime and nthPrime gets the nth prime (of course).

index.js creates a server and uses the library in every call to /primes. The N number is passed through query string.

Suppose there are 3 clients trying to access this amazing non-blocking API:

When the third client sends the request the main thread gets blocked and that's because the prime numbers library is CPU intensive. The main thread is busy executing the intensive code and won't be able to do anything else.

But what about libuv? If you remember this library helped Node.js to do I/O operations with OS threads to avoid blocking the main thread and you are right, that's the solution to our problem but to use libuv our library must be written in C++ language.

As the documentation says:

Workers are useful for performing CPU-intensive JavaScript operations; do not use them for I/O, since Node.js’s built-in mechanisms for performing operations asynchronously already treat it more efficiently than Worker threads can.

It's time to fix our initial code:

index-workerthreads.js in every call creates a new instance of Worker class (from worker_threads native module) to load and execute the primes-workerthreads.js file in a worker thread. When the prime numbers' list is calculated the message event is fired, sending the result to the main thread and because the job is done the exit event is also fired, letting the main thread send the data to the client.

primes-workerthreads.js changes a little bit. It imports workerData (parameters passed from main thread) and parentPort which is the way we send messages to the main thread.

Now let's do the 3 clients example again to see what happens:

It worked like expected but spawning worker threads like that isn't the best practice, it isn't cheap to create a new thread. Be sure to create a pool of threads before.

Node.js is a powerful technology, worth to learn.
My recommendation is always be curious, if you know how things work, you will make better decisions.

That's all for now, folks. I hope you learned something new about Node.js.
Thanks for reading and see you in the next post ❤️.

Journey to Svelte (through Gatsby)

Jorge Ramón
Full Stack Developer at @Globant. Javascript is all that you need.
The problem with array cloning in Javascript (and how to solve it)
#todayisearched #javascript #array #deepclone
AlaSQL: A Real Database for Web Browsers (and Node.js)
#alasql #sql #showdev #javascript