Icons can be a real pain in the ass, and for good reasons.

For developer whose desired icon isn't be included in the component library he/she is using, normally he/she has three options:

But wait! That icon does not resemble it's neighbors! Too much padding, different color, even the stroke width looks strange.

Icons, whatever format they exist in the websites, are mostly originated from SVG files. Using SVGs as icons are no new topic, but icon fonts still seem to be the major trend. Font Awesome, Google Font Icons and many others are taking this approach.

There are many articles discussed about SVG icons vs icon fonts, like:

To summarize, the major pros and cons of SVG icons (compared to icon fonts) are: 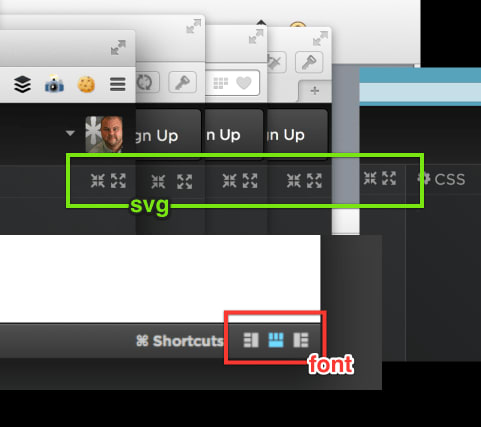 This image is originally published here

It's not hard to see that the pros of SVG icons are truly critical to make user experience superb, while the cons are, well, they can be dealt with in most cases.

So, why is icon fonts so popular?

The most apparent benefit of using icon fonts maybe because it's ease to use. One <script> tag and you are good to go. However when using SVGs as icons, you need to prepare a bunch of SVG files in the public folder (or insert them directly into html as inline SVGs), creating numerous <svg> tag in the page, deal with the icon sizes, paddings and other stuff. Even before you know it, you typed "Font Awesome" in the search bar.

So is there a way to make SVG icons as accessible as icon fonts?

A Project of SVG Icons

I was coding a leisure project Tooolbar, which requires to use a bunch of icons. The aim of the project is to generate a nice-looking toolbar painlessly with several lines of JSON. I want to give the users full control of what icons they choose to put in the toolbar, and I don't want the project to be icon-library-dependent. So it leaves me no choice but to use SVG as icons. (Yes, I can use PNGs and JPGs, but even my granpa won't consider it :)

During the develop, I learned amazingly how customizable can a SVG be. Knowing it's size can be easily changed, I learned that if one give the value of "currentColor" to the stroke or fill attribute of a <path>, the color of the <path> will inherit from it's ancestor. And great thanks to AkarIcons, I learned that the stroke-width and even stroke-linecap and stroke-linejoin property can be controlled by css.

To place an SVG into the html document, there are several ways:

2. Use SVG as CSS background

5. Leveraging the <use> tag

The <use> tag can be used to refer an external SVG (similar to the src attribute in the <img> tag).

The problem of the first three approaches is that you don’t get to control the innards of the SVG with CSS at all. Using the <use> tag allows outer color css property to be inherited by the elements with "currentColor" in the SVG content, but due to the whole <svg> is wrapped in a "shadow root", SVG <path>s ignore any other css property such as "stroke-linecap" or "stroke-width", etc. And it requires the root <svg> tag of the external file to have an id attribute, which is rather hard to meet in common SVGs downloaded from the web.

So in short, inline SVG is the best and only choice.

What Web Component has to Offer

I didn't intend to use any framework to build Tooolbar. But during my development, I found my code to be very much alike a component, be it React Component, Vue Component or Web Component. It takes properties, emits events, can be nested, and takes care of the content inside it's root element.

Another thing I noticed during developing Tooolbar is that if I can render some nested HTML using nested JSON full of key-value pairs, why don't write some semantic html tag directly?

So how about refactoring the whole project using some kind of compoent? I made a call with @awmleer , described the idea to him, he said he has been watching Web Components for a while and is willing to try StencilJS, a web component framework.

React or Vue.js or many other frontend frameworks can do most of the jobs, but I am a lazy man, I only want to write my code once and hope it can be used in anywhere. And I'm so lazy that I don't want to write any wrappers.

Introducing Icons Made with Web Components

With pains and gains in mind, only several hours after the first phone call, here are the final result.

So what did we do?

After bundling, the index.js with its loader included is only ~4KB gzipped, every icon is lazy-loaded and only adds ~0.6KB to the traffic. So for a normal page with ~10 icons, akar-icon-web-components loads only ~10KB of data, compared to the original integrated SVG of AkarIcons ~200KB gzipped.

With one line of <script> import, you can now have any beautiful AkarIcon on your page. No <i>, no <span>, but <akar-icon>, and it's supported natively in the browser. Furthermore, you can put it inside of your React or Vuejs project, it still works perfectly.

One of the cons metioned with SVG icons is it's not cached perfectly. In akar-icon-web-components, SVGs are loaded using fetch from the original AkarIcons github repo. We use a simple map object to keep track of whether an icon has been fetched or not, so the same icon won't be fetched twice in the same page load process.

Finally, huge thanks to AkarIcons, this project won't come to life without you. And hope you enjoyed reading this article!

John Dope
Why your GitHub profile should stand out?
#github #beginners #career
Music Monday — What are you listening to? (Rock Edition 🤘)
#watercooler #music #discuss
An Honest Opinion About My Blog.
#disscus #programming #career #motivation

Once suspended, johntheo will not be able to comment or publish posts until their suspension is removed.

Once unsuspended, johntheo will be able to comment and publish posts again.

Once unpublished, all posts by johntheo will become hidden and only accessible to themselves.

If johntheo is not suspended, they can still re-publish their posts from their dashboard.

Once unpublished, this post will become invisible to the public and only accessible to John Dope.

Thanks for keeping DEV Community 👩‍💻👨‍💻 safe. Here is what you can do to flag johntheo:

Unflagging johntheo will restore default visibility to their posts.