A few years ago if you needed to add some interactive feature or functionality to your website the chances are you’d reach out for the DOM-centric selector sexiness of jQuery. These days however with the rise of “the modern javascript framework” more and more developers are flocking to these tools, (and for good reason). But what if your site doesn’t require a state and a declarative UI… should we still be using jQuery or is there an alternative way, a better way, an ES6 way? 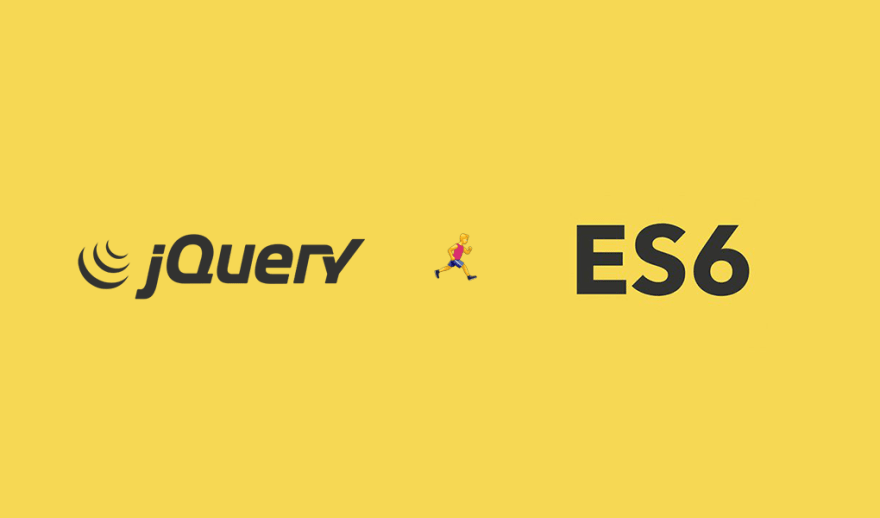 I want to state = { workInProgress: true } that this is very much a work in progress and more of a high level overview of our build process. It works for our specific needs as an agency but might not fit your own.

In our static sites prior to moving to ES6 we would utilise libraries like Bootstrap and customise them accordingly using jQuery for any more complex interactivity. However after a while we found that our JS would quickly become bloated, unstructured, hard to maintain and difficult to pass between developers. While these issues can’t solely be blamed on our use of jQuery some technologies such as BEM, SASS and Twig encourage modularity, structure and maintainability in our codebase whereas jQuery doesn’t, and as a growing agency we wanted to change this.

We had a clear idea of what we wanted to accomplish with the transition from jQuery to ES6 so we laid out some key features:

We decided to first create a folder structure and split up our functions into files — this consisted of the following:

FUNCTIONS:
An object of, you guessed it – all the function handlers in the site which can be called from the front-end at any time to initialise interactivity on any DOM elements.

INSTANCES:
An object consisting of any initialised class instances (which we call “modules”) containing methods and callbacks that can be accessed by any other JS functions.

We then came up with a common structure for our function handlers, here’s an example being used in dropdownsHandler.js: 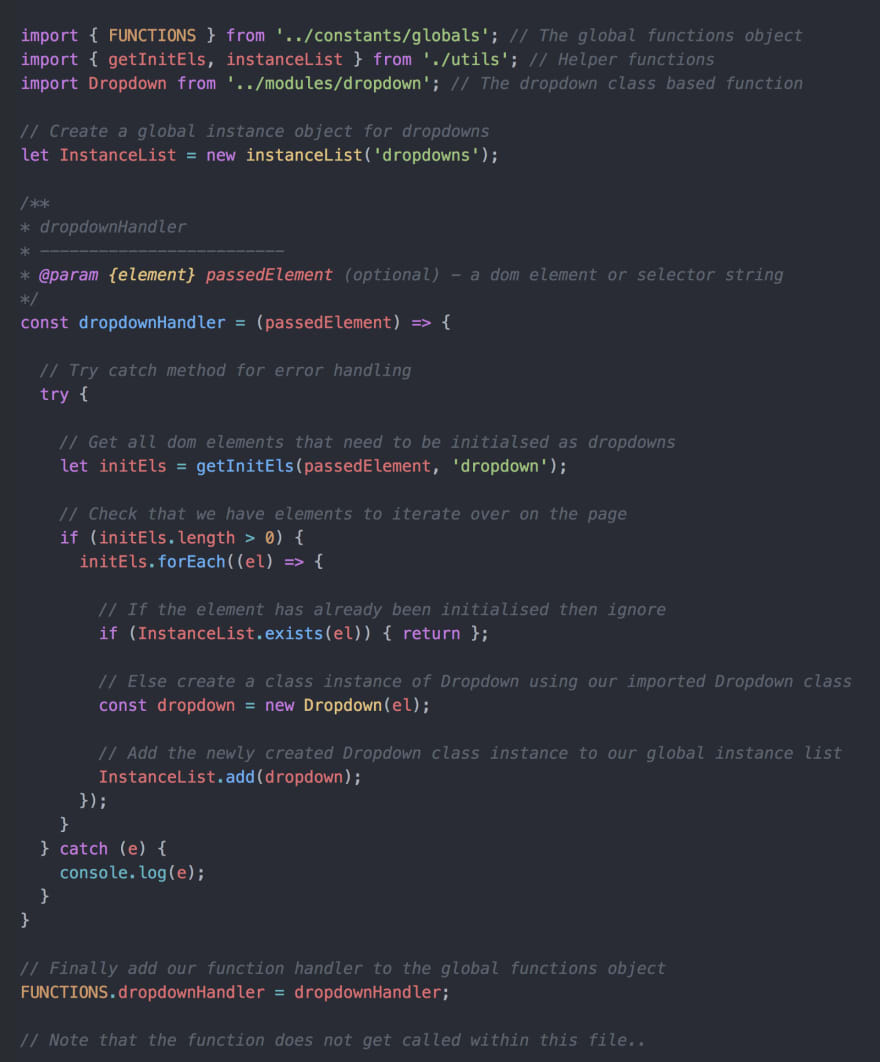 As you can see within the function handler we are initialising a new instance of our dropdown module. To give you a quick idea of what this does here’s an example of the initialisation and public methods that module provides. 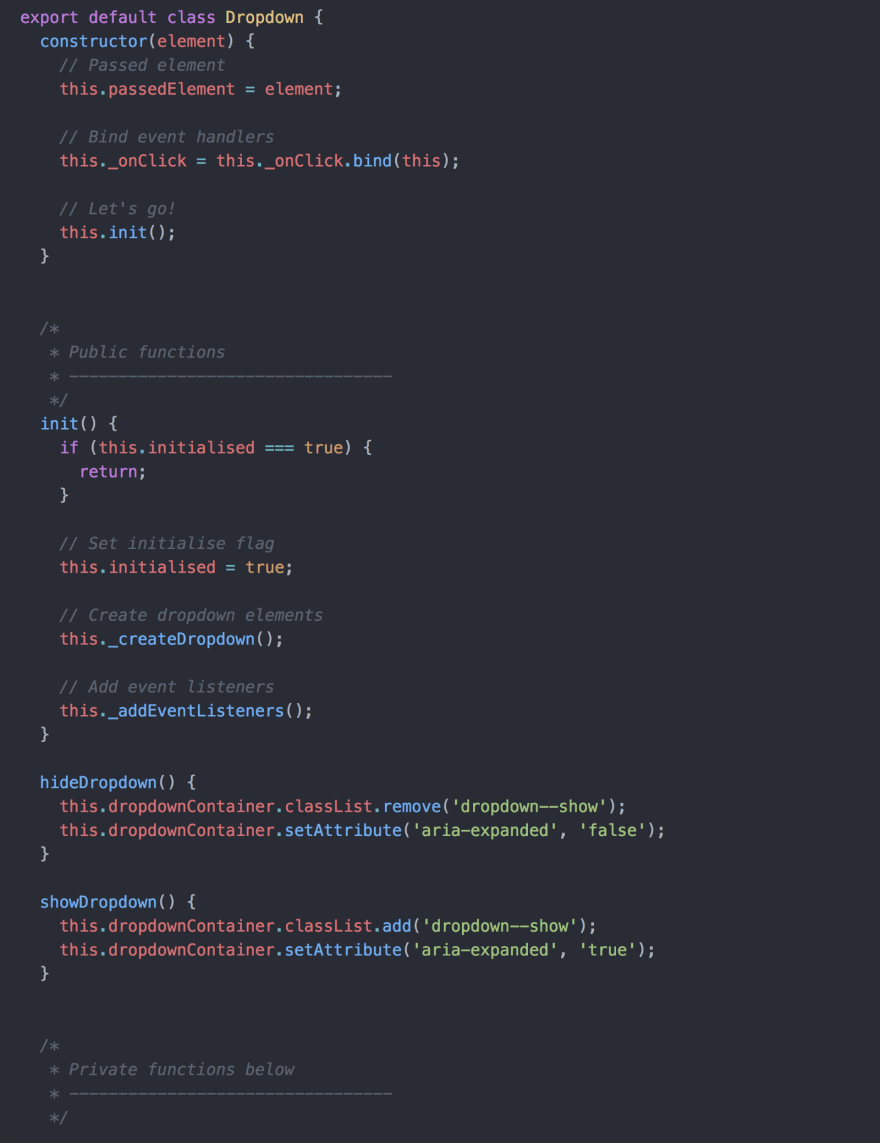 Now - the above might seem a little like overkill just to initialise a simple dropdown. However using this method will give us access to two important abilities when it comes to “hooking” (yes I know) our front-end system into other client environments.

Before I go into that though, here’s a quick view of our load.js file which deals with the overall initialisation of our function handlers on page load: 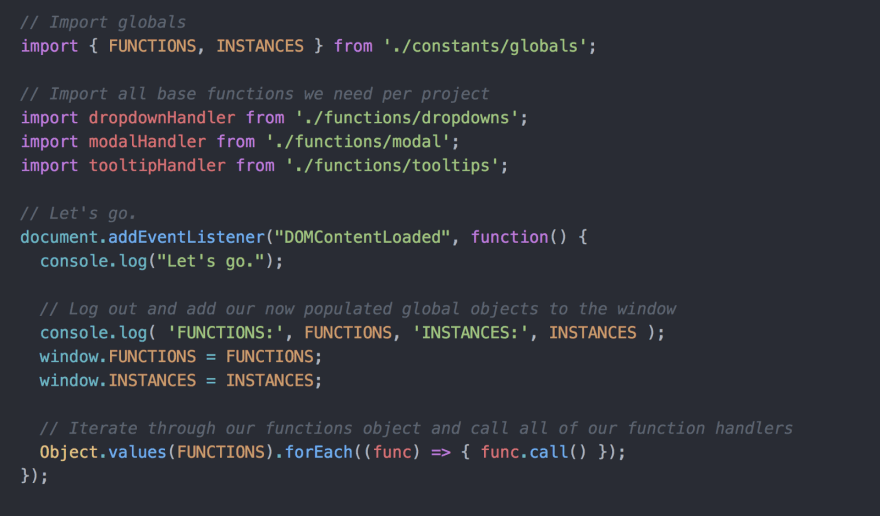 After using the initialisation method above we now have access to our global FUNCTIONS & INSTANCES objects from the window object and we can see what they contain in the console:

The above visualises those two important abilities I mentioned earlier - the first being we now have a list of our custom function handlers that can be called at any point using:
window.FUNCTIONS.dropdownHandler(‘.myPassedElement’);
this is particularly useful for initialising over dynamic content that’s been rendered after page load.

And secondly we now also have a list of any instances that have been initialised, each with their own methods and callbacks available to use elsewhere within our JS, for example:
window.INSTANCES.dropdowns.helloImADropdown.showDropdown();

Both of these abilities were essential in making our front-end templates more adaptable to any client environment due to the fact they can now “hook” (last time I promise) into almost any aspect of our JS.

After we implemented this approach on a couple of production projects this is what we learnt, aside from the benefits previously mentioned above:

Now many of these practices above have been used before however usually in the context of a framework rather than a static site which is what gave me the idea to write this article. I believe there is a space between a static site and a full blown JS SPA which needs some attention and although I don’t think this is the perfect solution, in my mind its a start.

As I mentioned also in the beginning of this article, this is very much a high level overview of our build process specifically looking at our transition from jQuery to ES6 and the benefits it’s had. There’s plenty more I would like to go into such as how we initialise our JS from markup in a consistent way, our SASS/BEM setup and even potentially open sourcing our boilerplate repo but in the interest of time I wanted to keep this article (relatively) concise.

I do however plan on continuing to report on our learnings as we meander through these ever changing times of JS.

If you’ve got any feedback we’d love to hear from you — please leave a comment here, or drop us a line on Twitter, we’re . @InktrapDesign

Front-end something or other...

How to Build Your React UI with Reactstrap

Useful Things You Missed in the JavaScript Window Object: documentURI, embeds, and fonts