Debugging Azure Functions can be extremely easy if you add the appropriate logging and error handling to your code. However, there are going to be times where debugging with these techniques is simply not enough. As a result, we need a robust debugging environment to trace a transaction end to end. Before I get to the environment setup, I want to first outline the high-level transaction flow (as I understand it) for Azure Functions. Please refer to the diagram below, which was posted in March 2018 in the Azure Function Python Worker wiki here: 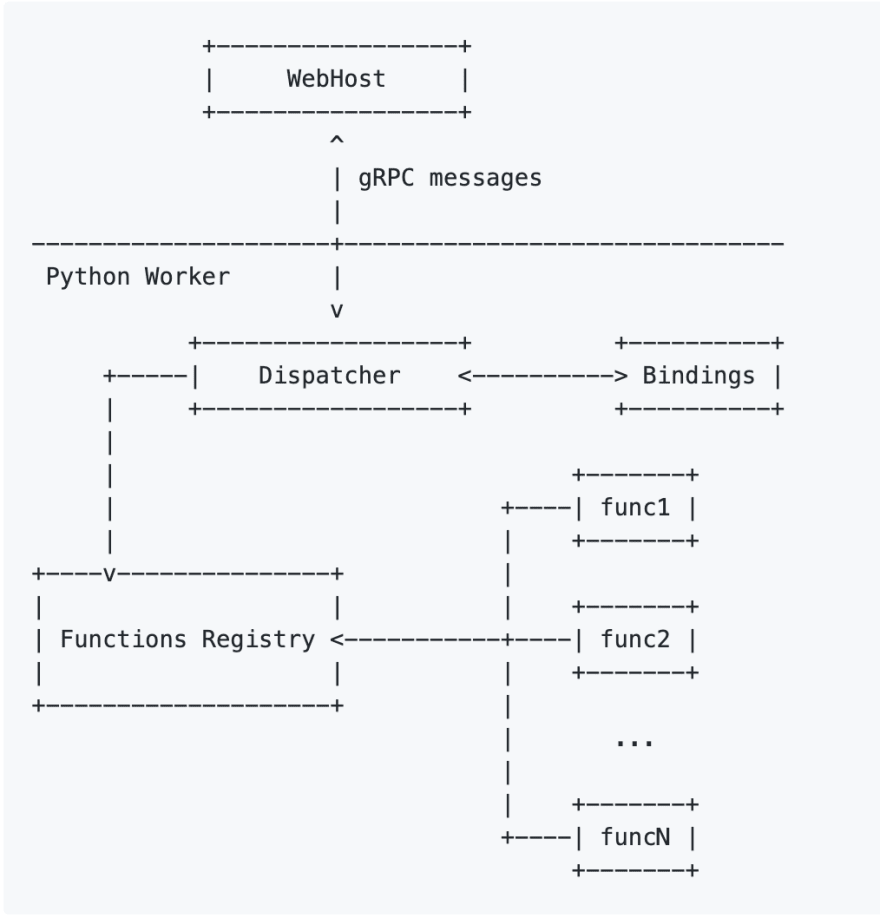 There are two pre-requisites necessary to build and debug Azure Functions Host: dotnet core and Visual Studio (VS) Code.

As you will see later in the article, following the above folder structure will allow you to debug multiple versions of the Azure Functions Host at the same time.

Download source code of Azure Functions Host’s latest production release. Please note: you can, of course, download any branch you want from GitHub; however, I want what’s running in production since non-production branches may not build successfully. From the root of the afdebugenv run the following commands:

When finished, you will build the debug version of the Azure Function Host from source using the dotnet executable from the command line:

This build will take a few minutes to complete and should build with no errors (even on my MacBook Pro).

Symbol files hold a variety of data that are not actually needed when running the binaries, but which could be very useful in the debugging process. Symbol files are specific for each version of the software, so we are going to create a symbol folder in our Azure Functions Host folder. From the root of the version of Azure Functions Host that you are debugging run the following commands:

The Azure Functions Host ships with a python worker which we will use for debugging purposes. Please note: the below path is specific to my setup (OS X), the path to your worker.py will be some variation after “../netcoreapp2.2/workers..”. From the worker directory, run the following commands:

Launch.json and tasks.json need to be customized to properly build and debug the Azure Functions Host. I am providing example files that will allow you to get up and running much quicker, which is why I was so specific as to the naming of directories above. Once you are comfortable, feel free to customize the launch.json file to meet your needs. At the root of the afdebugenv folder, run the following commands:

When finished, open VS Code from the afdebugenv directory. You may get a notice that says, “Required assets to build and debug are missing from ‘afdebugenv’. Add them?”. Say yes.

We are effectively running the entire Azure Function stack locally, so we need to install ptvsd and Azure functions. Run the following command:

If you made it this far, kudos to you. I thought about automating this entire process, but I figured that given the rapid pace of change in this space, it would be obsolete within a few months. Assuming you have a plain vanilla HTTP Trigger function app in your functions directory, we are going to run a short test below to ensure your environment is ready to start debugging. From the root of your afdebugenv directory, open up VS Code and perform the following steps:

Please note: Stopping the VS Code debugger will NOT kill the worker.py process spawned by Azure Functions Host. As a result, you have to manually kill the process to free ports TCP 5000/5001 back up. Please note x2: you have to stop the VS Code debugger FIRST, otherwise, the Azure Functions Host will continually spawn up worker.py processes every time you kill it.

In future articles, I will be covering advanced debugging topics that rely on this article as a foundation. If you have any feedback, please send me a note at gattjoseph at hotmail.

I build security programs and defend networks. Sometimes with Python or Azure Functions.

If you are constantly questioning yourself about your personal and professional growth that means you are already off to a great start!

How to Create Variables using any Language