When I started coding, the first thing I did to put my new knowledge into practice was to automate a process that was done every day at my job.

I worked with video editing and, at least once a day, I had to download a media with the recordings to a backup server and then pull them to my machine to start editing. So, I decided to create a script that would do this.

By automating everyday processes, it was as if I was “gaining” time. If a daily task that takes 5 minutes to do is automated, in 5 business days, you will have 25 minutes more to do something else. In a month, 1 hour and 40 minutes; in a year, 20 hours…Multiply that by more tasks or users and you have considerable numbers.

How did the inspiration come about?

Studying JavaScript, I watched a series of videos from Fillipe Deschamps, where he teaches how to create a YouTube channel that generates content programmatically.

In short, he accesses a Wikipedia article to get the information that will be used in the video; uses IBM's Watson artificial intelligence to “break” text into sentences; the Google API to fetch images to illustrate the video; ImageMagick to process the photos and create the thumbnail; Adobe After Effects to edit the video, and finally the Youtube API to upload.

I followed the series and made this project. In the end, I added some extra functionality like generating audio for each sentence with the Text-to-Speech API, also from IBM's Watson, and adding them to the video.

What is the project

The idea was to create a YouTube channel with replays of matches of a very popular game called “League of Legends”, fully automated.

Some sites make matches of professional players available for download. Replays are executable files that run the game.

To automate the entire creation process, a few steps were necessary:

As I was more familiar with Javascript having already used it in other projects, it would be the obvious choice, but I had a problem, I needed to run the game and configure some things when the game started. For that, I needed to control the mouse and keyboard programmatically.

I looked for some Javascript library that would help me to do this, but I was not successful. That's when I remembered one in Python, which is called PyAutoGUI. So, I decided to do everything in Python! In addition to having everything I needed, it was a chance to perfect myself in another language.

How it was implemented

Web scraping is a method of accessing any website and getting information.

What I used to search for matches was League of Graphs and, through this link, I can access a page with replays and filter my search, to get only matches with good players.

The idea here was to take the first game and extract the information from this table. 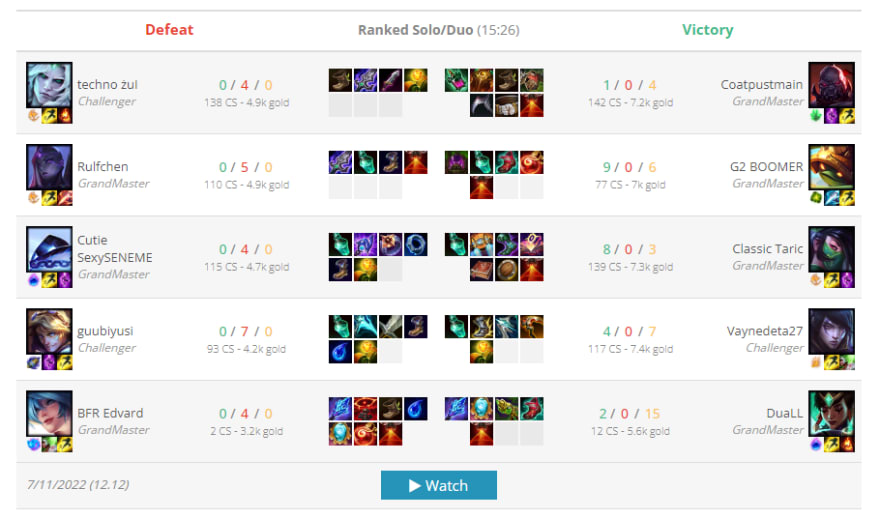 Among the many Python options to accomplish this task, I chose Selenium because it has the functionality to interact with the site. The library lets you click to download the game.

I created a Python dictionary with all the information I needed and saved it in a JSON file, in a folder called “assets”, at the root of the project.

To create the thumbnail, I developed a template with HTML and CSS. With the JSON information, the data is dynamically filled and an HTML file is saved in the “assets” folder:

After that, I use Selenium again to access that HTML and take a screenshot of the page. The image is saved in png in a folder in my local directory.

The result is this: 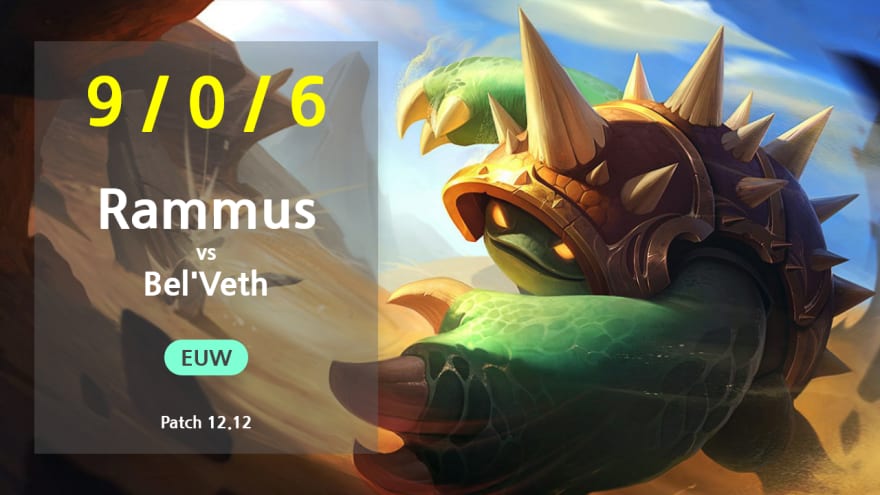 To simplify the creation of the video, I decided to record the game with OBS Studio. So I can add on-screen elements, which are superimposed at the start, without the need to edit or post-produce the video.

With Python's subprocess module, I run the .bat file that opens the replay of the match.

PyAutoGUI is used to open OBS Studio and put the match to record.

When the game is over, recording stops, and a .mp4 video file is saved to my local disk, ready to use.

I created a project on Google Cloud Platform, to be able to use the Youtube API.

With the JSON information, I make a request with the title, description, keywords, and the video file.

When the video upload finishes, I make another request to add the thumbnail to the video.

This project allowed me to use different technologies and methods to programmatically create content. With all the automated processes, just run a line of code to populate this channel with a new, updated video with thumbnail and custom information.

You can check the channel here.

You can check the code on my Github.

Feel free to ask questions, make suggestions and contribute to the project.

How to become a better developer

João Maranhão
I like to learn stuff and write about it!
Como usei Python para automatizar um canal do Youtube
#python #braziliandevs

Once suspended, joaomaranhao will not be able to comment or publish posts until their suspension is removed.

Once unsuspended, joaomaranhao will be able to comment and publish posts again.

Once unpublished, all posts by joaomaranhao will become hidden and only accessible to themselves.

If joaomaranhao is not suspended, they can still re-publish their posts from their dashboard.

Once unpublished, this post will become invisible to the public and only accessible to João Maranhão.

Thanks for keeping DEV Community 👩‍💻👨‍💻 safe. Here is what you can do to flag joaomaranhao:

Unflagging joaomaranhao will restore default visibility to their posts.