I think most people would agree that Retrospectives are a vital part of building a high-performing team and yet it's often (in my experience, at least) rushed so that the next Sprint can begin. If your team is already having healthy discussions during your Retrospectives then you're winning, but if the same kinds of errors happen Sprint-after-Sprint then maybe the Retro itself needs some improvement.

With this post, I'm hoping to show that with a relatively small change a team can get a huge amount of value from the time they spend in Retrospectives. You're probably already capturing issues and ideas, from there it's about optimizing how they're evaluated and turned them into habits with the least wastage. If the system can also highlight successes as they happen that would be amazing!

In my experience, a good Retrospective balances two categories of items:

We want to give both categories the appropriate time, without having to discuss every item in every meeting. In other words, it's about managing the team's attention.

A very popular technique for studying is to use Flash Cards in combination with Spaced-Repetition. The standard-version (also called the Leitner Method) can be implemented with physical boxes and cards as follows:

Next, when you sit down to study, review each box half as often as the previous one:

For each card, test yourself if you still remember it:

The reason the review-interval doubles each time is because with each subsequent reminder the brain retains the memory for longer before it starts to fade. 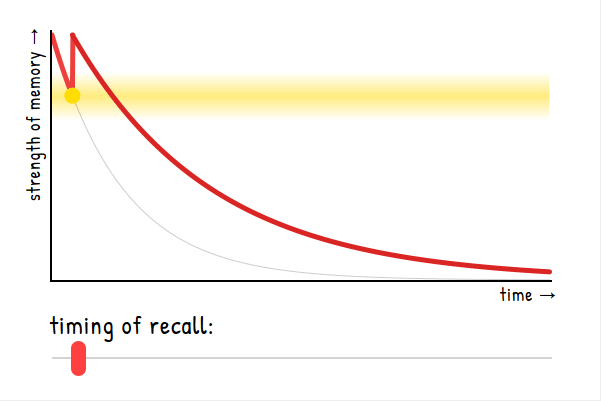 After 3 or 4 revisions your brain gets the message and realizes that it's something really important, and so it gets committed to memory. 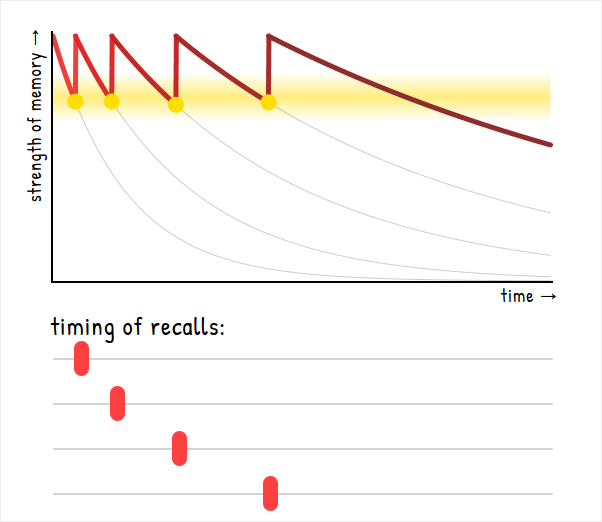 An Organization is really a bunch of Individuals, so the collective memory is only as strong as that of the weakest link. We can use the same system of Spaced-Repetition to automatically trigger a "remembering" of an old improvement and help a team to turn it into a habit much more easily.

Applying Spaced-Repetition to a Retro

This could be implemented with the same boxes and cards we've just seen, but if you're already using a tool like Trello you can use that as well. If you would like a ready-made template you can click here to see an example.

Add the Repeater Powerup and set up a Marker that automatically tells you which Columns are ready for review:

Refer the template if you want to see an example.

We're assuming here that your Retrospectives are run once a week. If not, adjust the automation and the columns accordingly and keep in mind that each subsequent column should get reviewed half as often as the previous one.

During the Sprint, team-members add items to the Pending Review column

First 25% of the Retrospective

When the Retrospective starts, collect any and all items that people want to discuss and put them in the Pending Review column. The items in the first column are probably the newest, so they'll probably take longer to discuss:

Remainder of the Retrospective

For the remaining lists:

After a Sprint or two you should start to see some positive changes:

If you're setting up a brand new team from scratch, I'd recommend Toyota Kata and Retrospective Antipatterns as starting points. The approach that's shared here is more to help existing teams that are feeling stuck to give their Processes & Thinking a bit of a shake-up.

So what do you think? My thoughts on this topic are still evolving so if you enjoyed it or would like to discuss, I'm at jlouzado on Twitter; that's probably the best way to reach me.

Thank you so much for reading, see you in the next one. :)

Will Python replace Java? Myths you still think are true.

What are the top 5 mobile apps that you use every day?