I have yet to meet a software developer or manager who would disagree with the statement, "We should build quality software." However, ensuring quality can feel like an uphill battle. I used to have this Despair.com poster in a frame on my desk, but it unfortunately got lost during one of the many building moves that happen when you work at Amazon. 😂 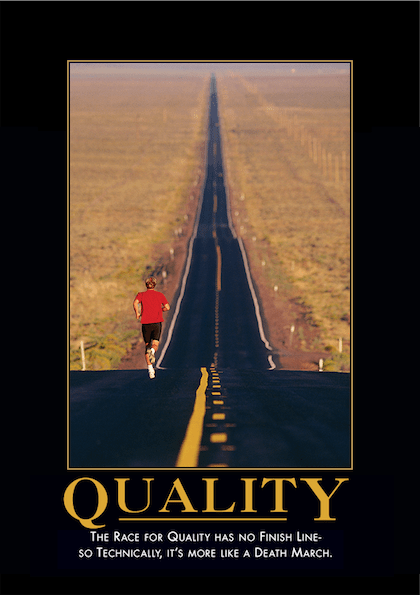 I've come a long way in my career when it comes to software quality. At my first job, we didn't even write automated tests at all. Every change was tested manually at the time you developed it *shudder*. I think it's because I've seen that side of software development that I've become such a huge quality advocate. Now, I've led multiple teams at Amazon to develop critical services and web UIs where each commit goes through a full continuous deployment pipeline with automated unit and integration tests and other safeguards to ensure quality all the way to production, so I have a lot to say on the subject.

What I wanted to cover today is a common developer question I get: How do you ensure integration tests get written for your software?

At this point, most teams/companies are on board with writing unit tests. It's relatively easy to enforce a rule on your team that all functional changes must include unit test changes in the same commit/PR. While code coverage is not a perfect metric, it is a decent measurable indicator that this policy is being enforced.

However, unit tests alone are just not enough. Ensuring integration tests are written can be tricky though. The key problem is you usually can't test a service or website until you've built enough of it to process an end-to-end request. If you don't think carefully about how you're going to structure the delivery of the features of your product, you can end up saving all integration tests until the very end of the project where it's common for them to get deprioritized due to deadlines.

I wanted to share a solution to this problem that I've tried on multiple teams and have found to be extremely effective in solving this problem: Behavior-Driven Development (BDD).

Let me give you an example. Let's say you're writing a simple banking service that allows you to open accounts and make deposits and withdrawals. You might receive a bullet-list of requirements for this service, e.g.,

These high-level requirements are a starting point, but when you use BDD, the next step is to break up this project into features and then write detailed scenarios for each feature using simple language that can be read and understood by both developers and key stakeholders. For example, the above requirements would be described in the following feature file:

Like I said, I've used BDD on multiple teams now and it's been incredibly effective. Here's what I like about it:

First, writing the feature files increases collaboration, ensuring developers, management, and key stakeholders are all on the same page about what the expected behavior of the system should be before it's built. The feature file example I gave above may seem simple to write, but you'd be surprised how many questions come up while trying to write one. Developers are awesome at thinking of all kinds of hairy edge case scenarios, and having to write them out drives requirements clarification questions back to management/stakeholders. This removes a lot of wasted time and effort lost due to requirement misunderstandings that are very expensive to fix later in the process. I find after management has been through a few cycles of this, they love it, because they have confidence that their team is building the right thing and it will work (and continue to work!) once it's built.

With both management and developers seeing benefits, you don't get in situations where you deprioritize integration tests, because priority discussions happen at the feature level and writing integration tests is incremental rather than being this giant, insurmountable task at the very end of the whole project when you're feeling pressure to launch.

Hopefully at this point, I've made the benefits of BDD pretty clear. Maybe you're interested in trying it on your own team. Great! I highly recommend it. However, I've also used this in practice on several teams and wanted to cover some common pitfalls to watch out for when going down this path.

Pitfall 1: Features are too big

Since integration tests are written for each feature, in order to develop integration tests incrementally, you have to break down projects into multiple features. This practice has many other benefits as well, so I recommend it regardless of whether you're using BDD or not, but for BDD specifically, if your "feature" is the whole product or project, then you're back in the same boat of saving writing integration tests until the very end where they're likely to get cut due to time pressure.

So if you go to write the feature file and it feels like a daunting, never ending task, your feature is probably too big and needs to be further broken down. If you're practicing Scrum, think of a feature as something that should fit inside of a sprint. If you're not practicing Scrum, my team's sprints are 2 weeks, so you can use that amount of time as a guideline. 😊

When you think about it, what you're doing with BDD is maintaining a mapping between a human-readable description of how your software should work and the code that actually ensures it works this way. There is overhead in maintaining this mapping, but it's worth it as long as someone other than a developer reads the human-readable description. Why would a manager/stakeholder waste their time reading a feature file at the unit test level? They shouldn't, since they should be more concerned that the system behavior meets the requirements and less concerned about the low-level implementation details. I've also never seen developers read feature files at the unit test level, because it's usually easier for them to read the test code itself. So these mappings are being maintained for absolutely no benefit. Just don't do it.

Many BDD books advocate for this idealized world where product managers or stakeholders write the feature files directly. I think the idea is it will force them to actually think through the detailed requirements before handing them to developers. I've never seen this actually work in practice. While the feature file language may seem very open-ended and expressive to a developer, it is still a pretty constraining format for a product manager to use, and they tend to be much more comfortable writing actual prose in a document editor like Word.

Also, as I'll cover below, since scenario steps have to map to executable code, writing feature files becomes a bit of an art where you not only specify requirements, but do it in such a way that the underlying step implementations are maintainable. A product manager will quickly become frustrated when developers code review their feature file and have all kinds of comments related to implementation of the feature scenario steps and fewer comments about the actual scenario content.

Finally, I think having developers translate requirements documents into feature files really helps them internalize the requirements of the feature. It also empowers them to ask many questions about different edge case scenarios that the product team may not have considered. If a developer was just handed a feature file, they may not scrutinize it or think through it the same way they do when they write it themselves.

I recommend using the step parameters feature of Cucumber very sparingly and to never use more advanced features like data tables. You should optimize for readability of the feature files by non-developers, which usually means pushing lower level, superfluous details about the scenario down into the step implementation. Do yourself (and your management/stakeholders) a favor and DON'T write scenarios like this:

Hopefully it's clear that all this additional detail takes away from the readability of the scenario. While precise, your product manager and stakeholders' eyes will glaze over as they try to parse the meaning out of the unnecessary details.

Good patterns for step implementations is probably worth a separate blog post, but I'll try to condense this down to the essentials. BDD tools allow each step in a scenario to map to a function call. However, for a given scenario, it's very common that the steps need data that was collected in a previous step. This means your functions will have to share data between them. Ok so maybe you can make a class to hold your step definition functions and use instance variables to share the data between functions. However, you usually want to group your step definitions into separate logical groups so you don't have a single monster class full of step definitions, and you'll inevitably end up writing scenarios that use steps spanning more than one class. So basically, you need some global data that's shared between step implementation functions. If you don't have an organized way to manage this global data, and instead set it somewhat randomly as you implement steps, you're going to end up with a spaghetti mess that's very difficult to maintain.

The solution I've found to work well is to have a single class that manages writing the global data. It can be read from within any step implementation function, but it's only written in one specific place. For example, when using BDD to test service APIs, I create a proxy class that wraps calls to that service. The proxy class saves any relevant information that may be needed by step implementation functions. Here's an example of what that might look like in Java:

Then your step implementation for When the customer opens a checking account with a $0 balance looks something like this (annotations are specific to Cucumber-JVM):

Note that the step implementation leaves saving global data to the proxy class. Then later steps can perform verifications on the saved data:

As your suite of feature files grows, test run times can increase quite a bit. Frequently, the tests are doing similar setup/teardown operations, which can take time. I honestly haven't found a silver bullet solution to this problem, because at this point, the benefits of BDD still far outweigh issues of long-running acceptance tests enough that we haven't really dug into a good solution to this.

However, here are a few tips:

When used correctly, BDD is a very effective way to increase team collaboration, remove waste from the development process, and ensure integration tests are built incrementally along with every feature of a product. Hopefully this post sparks your interest in giving it a try!

How to Improve Your Integration Tests Using OpenTelemetry

James Hood
Senior software developer at Amazon Web Services. I work on the AWS Serverless Application Repository and AWS SAM. I’m passionate about writing quality software and teaching others how to do the same.
Plan All of the Things!
#agile #codequality #planning