When Digital Ocean announced the availability of a managed Postgres database service, I wanted to answer this question:

Would my app’s performance improve if I switched my Postgres instance from AWS to Digital Ocean?

I'm working on Medtally.com, a data-driven medical community. Because nearly every page on Medtally requires fresh data, the speed of the database is crucial to providing a fast experience for users. 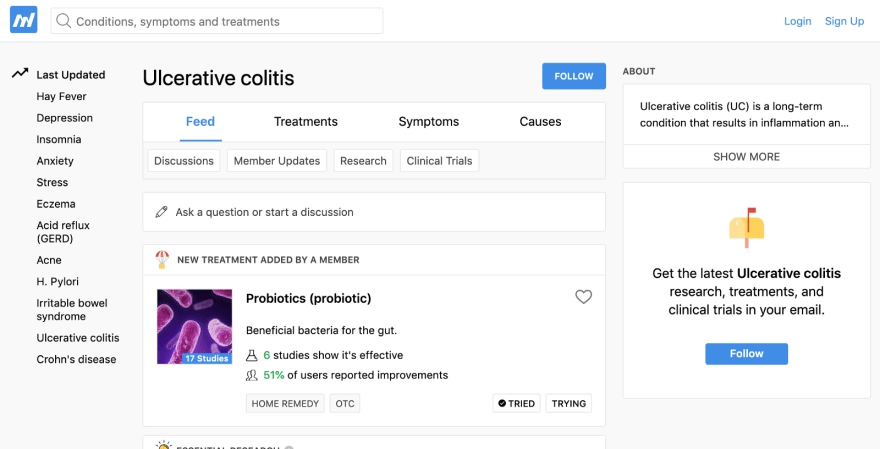 Example page on Medtally. Every page request pulls data from a Postgres database.

Thanks to the generosity of Digital Ocean's Hatch program, I was able to get some free credits to run a test.

How performance was measured:

To measure performance as close to the real-world as possible, I tracked the response time of a common query required to fetch data for our popular health condition pages (example).

I used Node.js' perf_hooks API and logged the results.

Here's the example code I used:

Digital Ocean's response time was 60% longer on average and 160% by median.

The app felt noticeably slower while I clicked around. The Medtally app can load pages in as little as 150ms. Adding 100ms to that time would mean 66% slower - a significant increase.

I was surprised. I expected the performance to be much closer since both databases had the same number of CPUs, RAM size, and disk size.

Some possible reasons why AWS was faster:

Update: The difference is only 2ms after I ran a few pinging tests between the AWS us-west-1 and Digital Ocean SFO2. We can rule this reason out.

Note: I could have eliminated latency as a variable in the test by basing the conclusion on query execution times in pg_stat_statements instead. I did not have enough time to do this but I may revisit in the future.

Back to AWS RDS

I will be sticking with AWS RDS until Digital Ocean improves its performance.

Besides the performance issues, I really did enjoy using it. The UI/UX is far superior to AWS and so is the documentation. I have high hopes for it in the future and we could use some strong competition in managed database hosting.

With that said, Medtally.com is back to using AWS RDS.

Interesting in connecting with me? You can find me on Twitter.