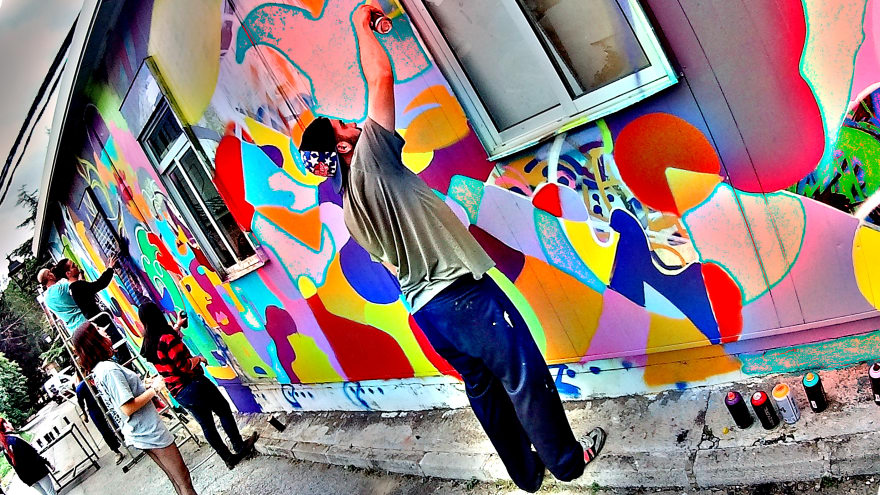 I've always wanted to be a graffiti artist. So I attended an urban art workshop last week by a great writer, Sendra

By the way Paula was there too, but her art is great already. And that segues into my main point.

You learn graffiti, like programming, by doing. But you can't just be given a wall, a few Montana sprays and some encouragement, and, here, you're already a graffiti writer. No you're not.
What Sendra did was to bring along a couple of other local artists, Nas and Flecha, and after defining roughly what was going to be done, they drafted on the wall so that, for us newbies, it was kinda paint-by-numbers. We still learned a lot, but we were helped part of the way. At the same time, if one, or all, of them, would have wanted to do the whole wall, it would have taken a lot of time. There's a lot of grunt work involved, and that's where we newbies could help.
Same happens with other thing I'm involved with: the Perl 6 documentation. I got a grant for improving it, and have been working on it for a couple of months. It's a never ending task, so we need your help.

You don't need a lot of qualifications to help with documentation. On a level, it's just text, and text is written by humans and it can have errors. So you can just spot awkward phrasing, spelling mistakes (there shouldn't be any, but it happens) and simply better ways so say something.

But it's also documentation for a purpose, having people do stuff in Perl 6, which is one of the most amazing languages. If after reading the documentation it fails to convey what you want it to say, raise an issue.

You can really help

And then there are the issues we really want help with. I have tagged just one, to help prospective contributors focus. In this issue new pages have to be written, and you will need to know at least the foundations of the language. The rest can be found out in a straightforward way.

We can help you too

I might have said this already, but Perl 6 is a great language. Even if you're not interested in the language itself, it's great to learn about Unicode or concurrency. Documenting a language from scratch makes for great resume entry. You have to delve into the source code and tests and literally create documentation out of thin air. And the documentation will be there for people to use and re-use it. So by helping us you can acquire lots of skills, and we can help you along the way.

Eventually, we created a beautiful wall (meet again Paula working on the upper levels), newbies and veterans together, in this graffiti jam. I feel proud of the part I personally worked on, and also of the whole thing, because I was part of it.

Do you want to feel proud of the Perl 6 documentation? Help us make it a bit greater and better!

What are your best practices for writing documentation?