Open source and SaaS. If you're in tech you've probably heard these terms being thrown around. Even if you aren't into tech, there are very high chances that you've at some point interacted with a product defined by these two terms.

Open source by definition includes software whose source code is publicly made available to everyone. Now, even though the source code is freely made available for everyone to inspect and make sure that nothing shady is going on behind the scenes, it doesn't necessary mean that it's to be free. Same goes for free software free as in speech not as in beer, that puts emphasis on the freedom of the user to do whatever they want with it. Even though free software and Open source might interlap in so many ways in their definition, free software is well .. software while an open source project might be just a couple lines of code you make public. GNU + Linux, VLC, Blender, anything that has the apache rubber stamp on it are all open source. Big companies too, after seeing the success of open source projects have also open sourced some of their work. VScode by Microsoft -not technically open but you take what you can get-, Angular 2 by Google and react by Facebook open source are some top tier projects which, if we to turn back time to two decades ago, would probably and most likely be proprietary. Heck at some point in History Java was proprietary.

Switching gears to the other elephant in this virtual room, we have Software as a Service (SaaS). It is a product or Software, but mostly product that is made available to users over the internet for a subscription. Netflix, Spotify, Crunchyroll etc. Any software that must be connected to the internet to work and that you must pay for can be defined as a SaaS product.

Most of the SaaS products are proprietary and their code is hidden from their users, unless you're twitch off-course 😂. Why? Because most of these platforms are extorting millions and millions of dollars from you by selling your data, but hey, you get to watch the latest, greatest, most incredible show by Leonardo DiCaprio and go to Twitter to share your opinion with the entire planet? (I'm not being sarcastic)

I know the tension is killing most of you reading this masterpiece of a blog post, wanting to know what I am trying to sell you. Let's change that.

Chatwood an open source software as a service product that allows companies to not only interact with their ccustomers/clients not only from the website alone, but also from other social mediums such as WhatsApp, FaceBook and Instagram. So why Chatwood? What makes it better than the rest if the bunch. 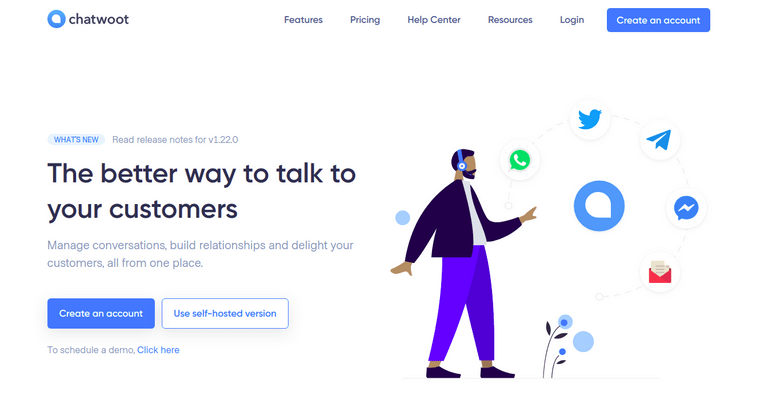 To paraphrase an article by big commerece on the importance of open source, 'by removing the barriers to the barriers between innovators, open sourced projects allow and drive competition and innovations within the community, enabling new or improving on previous projects'. Chatwood is a perfect embodiment of this sentiment. The project, initially a customer support software failed to take off as a business and was shut down. Still, to the surprise of the maintainers, got a lot of love from the community when they decided to open source it during Hacktoberfest. This is hugely thanks to the support from contribution from open source contributors which has enabled it thrive and compete with industry SaaS giants that also offer customer support software.

By integrating the open source community to their community the maintainer of Chatwood have enabled new and innovative ideas to be incorporated into their product while also getting support to fix previous bugs. This makes Chatwood even more secure. How so? .Everyday we see news of hackers finding new ways and creating new tool to exploit vulnerabilities in proprietary software. In a perfect world the security teams behind these products should be able to thwart these threats. But the world is not perfect, its flawed and broken and in this man eat man society everyone will do whatever it takes to get the bag, be it something illegal like holding code for the product for ransom. So how does this differ for open source products. Like I said Chatwood, while being open source does make money. What is stopping hackers from exploiting it? While security bugs do exist and are common place to anything that is ones and zeros, open source companies have the added benefit that everyone has access to the code and the permission to modify it. All without having to worry about the End User Agreements that users of proprietary software agree to. Chatwood also enjoys this added advantage. With developers from across the globe analyzing and testing the code for any vulnerabilities and patches being ruled out for fixes, you can be sure that your customers will be safe from exploitation and even if a bug is discovered someone from the community will be quick enough to roll out a patch for the fix. Another fight that open source is winning against industry giants.

No, it's not the bad ending you were thinking of it to be. As previously stated, Chatwood once died but thanks but after three days... no, no, not that story... Chatwood, as a proprietary project once shut down because it did not take off. But once it open sources, because of contributions from netizens around the world, It was granted a new lease on life. In the future, the maintainers may decide to hand over the project to new ones but they can be assured that support from the community will still be coming in. A good example of this longevity is GNU + Linux - the powerhouse operating system that drives the internet - Although the project has been around for over two decades it is still thriving and going on strong. This is not because GNU + Linux has some hidden piece of code that is monetized. Nop. It is because of the strong open source community behind it. When it started folks in the tech industry were hungry for an operating system that they could extend and they still are. There are no limitations on what you can do with it, extend it as you please and configure it according to what you like and dislike. As with Chatwood, you can also self host and extend some of the functionality if the default configuration does not please you. A feature that industry giant proprietary software do not come with.

A method to compute the Betweenness Centrality against Nebula Graph