Java and Python are popular object-oriented programming languages. Although they are widely used, there is still a fight to show their strong cross-platform support and numerous library features. We cannot ignore the fact that each excels in its own manner for end users.

If we look at the acceptance of Java vs Python:
Python is the world’s most popular programming language, with a rating of 15.42%. Java was the most widely used programming language in December 2020, right now there rating is 12.40%. yet as technology develops, changes are unavoidable. The top languages for software development and product engineering are Python and Java. However, because of the various use cases, Python for app development and Java development services are on separate growth paths.

The majority of companies use Java or Python in their technological stacks, even though Java is statically typed and Python is dynamically typed. Even while Python app development has been around longer than Java, significant growth in Python has only been seen in the last few years.

The differences between Python or Java for software development will be discussed in this article. It will take into consideration a few comparative criteria to show how Python and Java are advantageous in various enterprise applications.

It is generally advisable to properly examine a programming language's features before selecting one. You may compare the key distinctions between the two languages in this article based on factors like popularity, applications, stability, performance, speed, etc.

Some Best Features of Java

The following are some of the key characteristics of the Java programming language:

Some Best Features of Python

The following are some of the key characteristics of the Python programming language:

Below table explains better of Java or Python comparison: 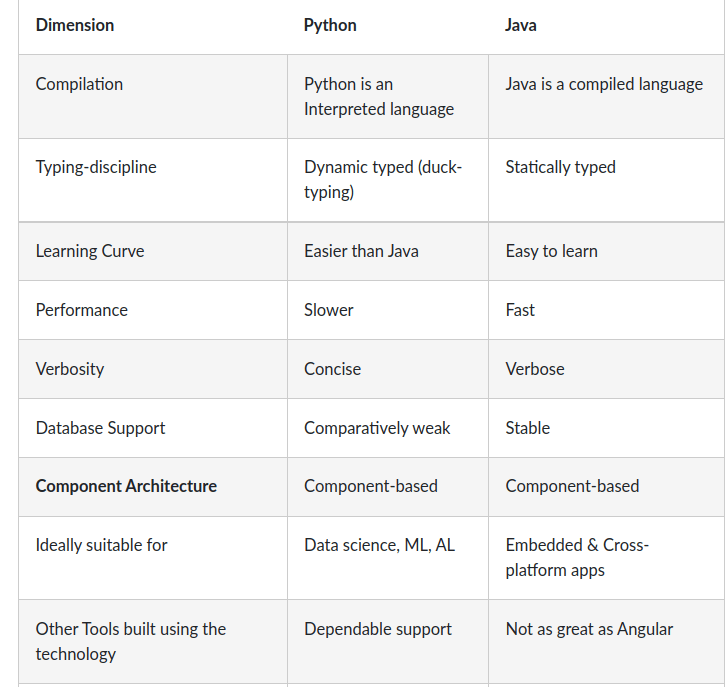 Java or Python Factors To Consider

Popularity:
The market’s popularity is the most important thing to consider when comparing any language. Kotlin, on the other hand, has decreased Java programming's appeal. The use of the programming language is still very common.

And when it comes to Python, the language is exploding in popularity in the programming world. This shows clearly that both programming languages provide beginners with a variety of options.

Architecture:
The runtime environment for Java code is provided by the Java Virtual Machine (JVM), which is part of the JRE (Java Run Environment). Java bytecode is converted into machine language. As a result, this could compile right away when it is executed. As a result, developers will eventually enjoy a seamless architectural experience. Taking about Python or java comparison there is tough competition in construction.

When it comes to the architecture of Python, the interpreter transforms source code into machine bytecode. After that, the bytecode file is stored in a folder. The same application uses the bytecode rather than translating it when you rerun it. The actual code is then run after the bytecode has been submitted to PVM.

Speed & Performance:
A Just-In-Time (JIT) compiler built into Java instantly translates bytecode to native machine code. And the generated code is immediately incorporated by the Java virtual machine. Since code no longer needs to be measured, compiling consumes less time and memory. This improves the efficiency and speed of the development environment.

Python, on the other hand, interprets codes based on variable time. This causes the compilation process to sluggishly run. Additionally, extra memory is consumed because the object type is derived from objects. This slows down language speed and effectiveness.

Coding Syntax Comparison:
Python has a simpler and more exact syntax because it is an interpreted programming language with dynamic typing.

Java is a statically-typed programming language that requires compilation of the entire program before running.

Type Python and then use 4+1, where the system gives five responses.

Which is better, Java or Python?
Python vs Java can be used to create a wide range of applications. Java is widely used for enterprise applications in addition to other applications. The best programming languages for DevOps, AI, VR, Big Data, Continuous Integration, Analytics, mobile chatbots, and Social are, however, those that use this language.

Python app development is becoming more and more common for both online and mobile platforms. Building business systems, desktop applications, and more can all benefit greatly from it. Python is frequently used by businesses in a variety of industries to develop machine learning and artificial intelligence solutions.

Wrapping Up
It comes as no surprise that these are the most widely used languages after comprehensive analysis and comprehension of the programming language Java or Python. Python is mainly used for its simplicity and ease of coding, whereas Java offers excellent reliability for developers.

Once suspended, jessica89079831 will not be able to comment or publish posts until their suspension is removed.

Once unsuspended, jessica89079831 will be able to comment and publish posts again.

Once unpublished, all posts by jessica89079831 will become hidden and only accessible to themselves.

If jessica89079831 is not suspended, they can still re-publish their posts from their dashboard.

Once unpublished, this post will become invisible to the public and only accessible to Jessica.

Unflagging jessica89079831 will restore default visibility to their posts.