Note: I wrote this for my blog awhile back, but I don't write there much any more because most of my time is spent Changelogging.

One Ruby feature that I fell in love with back in the day is the ability to tack conditionals on at the end of a line. For example, this bit of code:

It's a small difference, but the latter form often maps more directly to how the author thinks about the problem. It feels even better when teamed with the unless keyword:

After years of writing and reading code like this, I've slowly grown cold on the style.

The reason why I'm bearish on trailing conditionals may best be expressed by a road sign I saw on a recent road trip down Interstate 80: 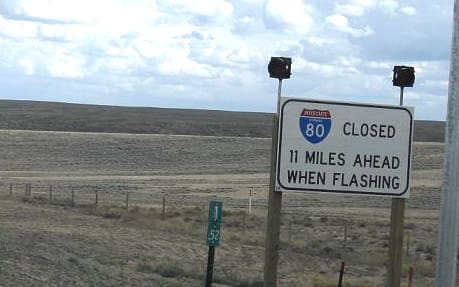 Notice the trailing conditional? A lot can go wrong with signs like these if the driver doesn't make it to the final line of the text. Why might that happen?

In this case, WHEN FLASHING is the key indicator on the sign. Why is it the last thing mentioned? In the world of journalism they call this burying the lead.

If the sign designer place WHEN FLASHING first, the driver could often skip the rest of the text altogether2. This saves cognitive overhead that the driver can use elsewhere and avoids potential disasters that might occur if the conditional isn't understood in time.

In a slightly-tangential way, trailing conditionals violate the Principle of Least Surprise. This principle — as most important things in life — made its way in to a Mitch Hedberg joke, in which he picks a fight with the phrase "Do Not Disturb".

The problem is exacerbated when driving 80 MPH on the interstate, but it exists in our code as well. The trailing conditional feels great when you're writing the code, but it often makes it harder to read. This is most obvious when the operation that precedes the conditional is verbose. Take this fake code, for instance:

What if you didn't scroll over to see the unless at the end? You wouldn't know what's going on at all. Admittedly, method names of this length are rare, but it is common to have trailing conditionals nested inside other control structures that have the same effect3.

Code is read much more often than it is written, so we need to optimize for readability over writeability4. Trailing conditionals tend to do the opposite.

Take a look at this method which returns a price_range string for a given object that responds to price_minimum and price_maximum:

The first line memoizes the price_range, since this is apparently an expensive computation. Lines 2 and 3 are guard clauses. What would this look like with traditional conditionals?

This code requires more vertical work to parse. There's a 3rd form it could take, which is to put the conditionals first and still keep each one a one-liner:

This works for me, but I prefer the return-first form because any time a method returns early we want to know about that ASAP.

Think twice before slinging around trailing conditionals. They put the cart before the horse and in extreme cases they cause the reader to miss the horse altogether. This makes them often less readable than the traditional form.

Or maybe Mitch was right and we all just need to read faster!

Jerod Santo
I make podcasts and stuff for developers @changelog
What do you consider your greatest developer strength? Weakness?
#discuss #programming #career
3 ways to retain your dev flow between sessions 💪
#productivity #programming #devtips

Once suspended, jerodsanto will not be able to comment or publish posts until their suspension is removed.

Once unsuspended, jerodsanto will be able to comment and publish posts again.

Once unpublished, all posts by jerodsanto will become hidden and only accessible to themselves.

If jerodsanto is not suspended, they can still re-publish their posts from their dashboard.