About half year ago, I try to be creative and figuring out how to find what my code change could affect in a large code base, to avoid some tedious problems. And I wrote an article of idea(or nonsense🙈) about it.

I naively thought the open souce world has all the Lego pieces I need, with a clear manual in my head, I could build the complicated stuffs like space ship right away.

But, there's aways a "but". The reality is, NO. I found some ready to use pieces, like @babel/parser, @babel/traverse, enhanced-resolve by webpack, and something similar but couldn't fulfill my need. One of them is built by a Russian guy, and it works well for solving to file level. Others are webpack plugins depending on webpack’s stat.json, which I chose not to rely on, as it could limit the possibilities, and it's way of resolving dependencies starting from an entry file does not fit for the idea.

So I did my own, again, and here’s how I make the packages in this ast-lab repo.

After investigation, I made my 1st phase plan to cover ES modules, it could be summarized into 2 parts:

The AST of imports

In an ES file, other than dynamic import, keyword import and export always appear in the root of the file. Here’s an example: 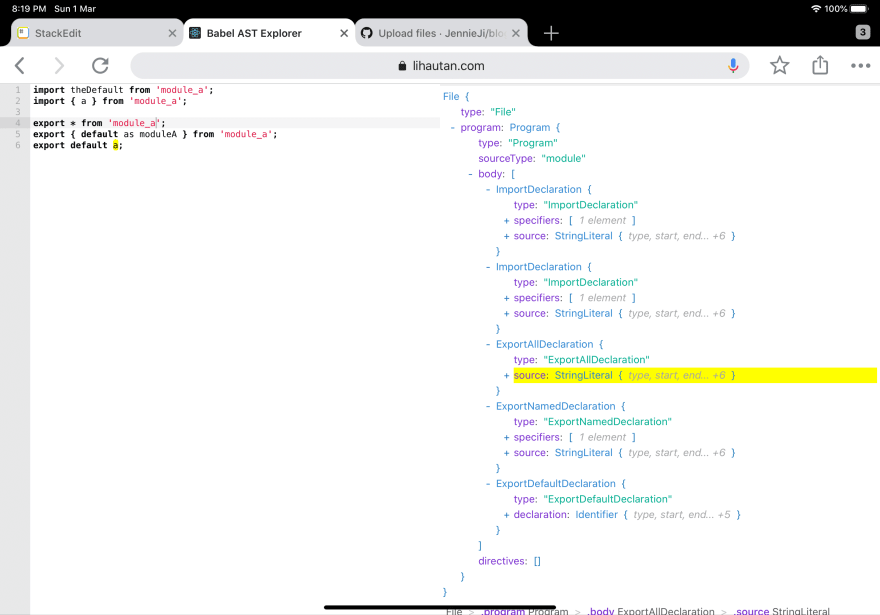 Thanks master Lihau create a useful tool AST explorer that uses @babel/parser as AST parser, my little experiment cannot work without it.

Each type may have slightly different structure, and multiple situations to handle with. Take import as example: 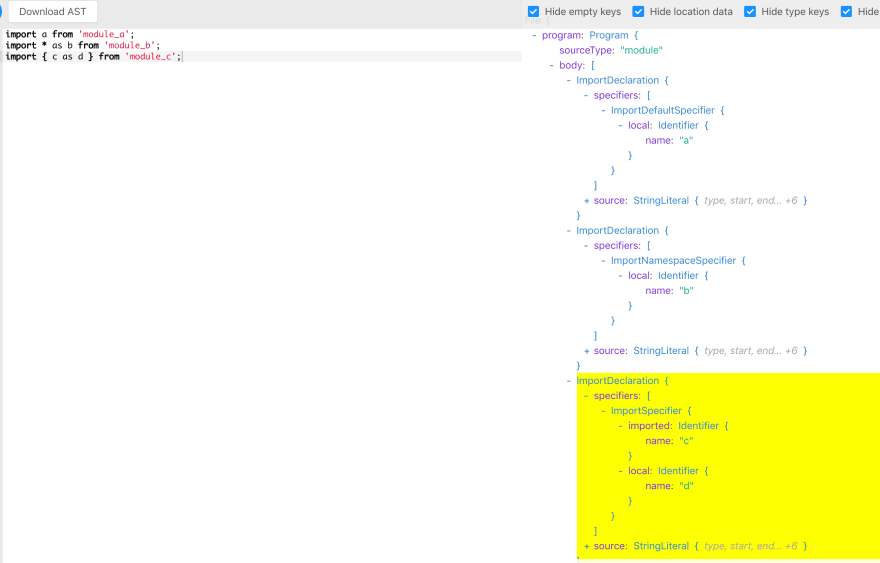 Though module exports has a name, when they are imported in another file, they could be used via alias, which means alias name is also required.

There are 3 types of aliases in importDeclaration:

All of them own a local.name property to store the alias name, and for ImportSpecifier, you may get the original name from imported.name.

Module path is stored in node’s source.value property. But the file represented by this path could be uncertain. It could be:

Now I understand why Node creator regrets about making this design, it does cause troubles.

I found Webpack’s enhanced-resolver to help. By default it uses Node’s file system module(fs) to verify whether a file exists in user's file system. It is able to resolve customised module path, symlink, alias by simple configurations, and it will return the resolved absolute path as result.

Problem solved? Wait, there are some special cases to be aware of :

Exports, and other root imports could be handled in a similar way, with the right types and properties.

Use @babel/traverse to traverse AST

AST is a tree data structure. To work with tree, we usually traverse nodes starting from the root node with DFS(depth first search) or BFS(breadth first search).

I used @babel/traverse package for AST traversing with DFS. It accepts a Visitor object, which takes a callback function or enter, exit callback functions as value, and types of Nodes as key. E.g.:

The best part of it is it provides various useful alias to reduce the work. E.g., Function type represents either ArrowFunction or FunctionDeclaration. All the visitors "matches" this node type would be executed, from top to bottom.

It also provides useful information, utils in a path object. You may get the path object from a Visitor function:

As a result, I extracted the import and export data in the following way:

Figuring out relationships within a file

A file may contain as many variables, functions, classes as they want. And often depend on each other, especially in functional programming. Which means, knowing what affects a file is not enough, not even useful in some cases, I got to be more precise, limiting down the coverage to declarations instead of files.

It requires the program to understand what does each declaration rely on. A word comes immediately to my mind - scope.

A declared name could be declared again, and in a context the local declared would be used instead of it's parent scopes. Thus, to figure out the right "relationships", I will need to resolve scopes.

Remember that I mentioned @babel/traverse visits AST with DFS, this makes it perfectly fit for using stacks.

When to create the stack, and push the declarations? This question made me realize an interesting “in-consistent” design in Javascript that I never questioned about.

It’s clear that the whole function block creates a scope, and in this scope it declared a new variable param overwrites the param in its context without any variable declaration keyword.

With the same brackets, but to declare a new param, you got to use keyword let, var, or const. This is also why in AST the function type is FunctionDeclaration, catch is CatchClause, but for, if, switch, while, function calls, try... are called Statement.

This solution works for most of the cases except:

Get the dependency map

An ES module only knows what declaration changed could affect itself, but no idea who is relying on its exports. Which means, to understand the impact of changing a function/variable/class of a module, searching through all the modules in the file system may find them all, but unnecessary for most of time, because we have practiced to keep files having dependency relationships under one folder/repository.

Let's say I have a simple repo like this:

And the information I get from the steps above:

It is clearer once draw this relationship out:

It's a Directed Graph in computer science. So firstly, we could reorganize the data above into a map could represent graph nodes and directions like this:

And then I could do graph traversal from the declaration to check with as following:

The result of the example is:

Setting up Babel and Typescript

EsNext features in TypeScript with Babel