This post continues some thoughts around unit testing components in design systems.

To boost your component library's test coverage through development, each component should have a visual snapshot in addition to unit tests. The unit tests serve as a form of documentation for the expected behavioural outcomes of your component; snapshots help validate the before and after of expected visual changes.

Compared to the unit test setup in my last post, Chromatic is a breeze. It only takes 2 min to add to a project and integrates easily with Github and Bitbucket repos.

@storybook/addon-storyshots can be plugged into the .storybook/main.js. Along with the Jest setup I mentioned in my last post, we can do this to set up snapshotting:

"DOM snapshots are awkward because it's tricky to determine > how a UI renders by evaluating an HTML blob."
Storybook Visual Testing Handbook, 2021

In fact, if you use a style framework like styled-components, unique class names are generated on component markup for compilation so you'll get meaningless inline changes that need to be updated.

Such changes may be flagged as errors on a CI pipeline and break it. Regressions or not, we want our pipeline to store the results, and for Chromatic to help us deal with the tests!

So I appended the following flags to my Jest script on my Bitbucket Pipeline:

The --ci flag tells Jest that it's running in a pipeline. The alias --passWithNoTests tells the test suite to complete if no test files are found. The alias -u flag stands for --updateSnapshot, thus telling our setup to take a new snapshot to replace the existing snapshot from a previous build. (Yes, you can push the snapshots to dev as a baseline to be compared future changes against.)

The above takes the snapshots, but to start activating visual snapshots with Chromatic you run :
npm run chromatic --project-token=YOUR_PROJECT_TOKEN 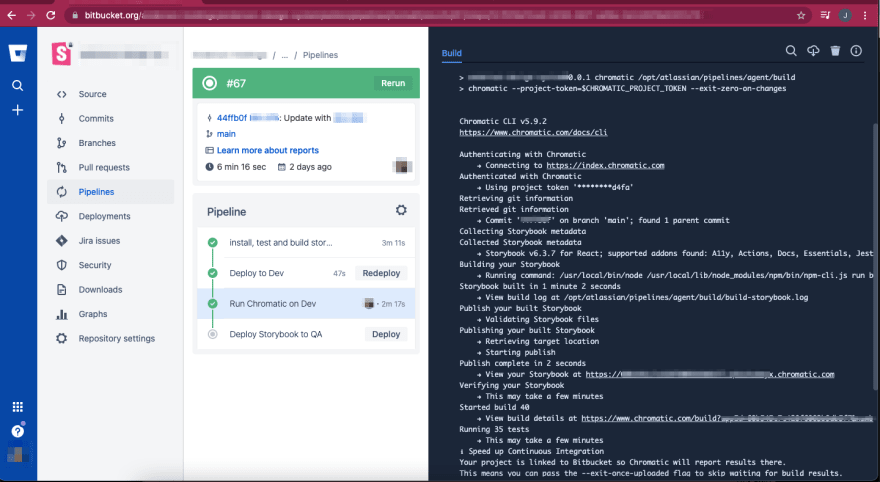 The flag, --exit-zero-on-changes will tell Chromatic to stop running if there are no actual changes to your components, (or it'll keep looking and the process will not finish, your pipeline will timeout or not complete).

Chromatic's free tier offers 5000 free Chrome snapshots per month. This should be enough to get you covered for the first months on a new project, but if you inherited a legacy design system, that's questionable since it's prone to take a snapshot of every single component unless you use their option to exclude snapshots on certain stories. And if you're inheriting a legacy design system then you, my fellow developer, should advocate to tool/automate for developer and QA efficiency. It's the right decision for a product.

The codeblock I included previously is just the start to making Storybook do DOM snapshots. If you want to take a programmatic route to visual testing, Storybook's add-on @storybook/addon-storyshots-puppeteer offers device emulation. I haven't used this on production, but from what I've seen, you're able to write full suites of end-to-end device tests!

But why waste time on that when you can tell Chromatic to capture different viewports? (Ok yeah I get it, there's no match for actual device testing, since devices actually have different pixel density ratios and auto zoom.)

Whether you automate this or decide to run it locally, on completion, Chromatic will supply a link to the latest version of a published Storybook and provide a link to click through to the UI Review dashboard. 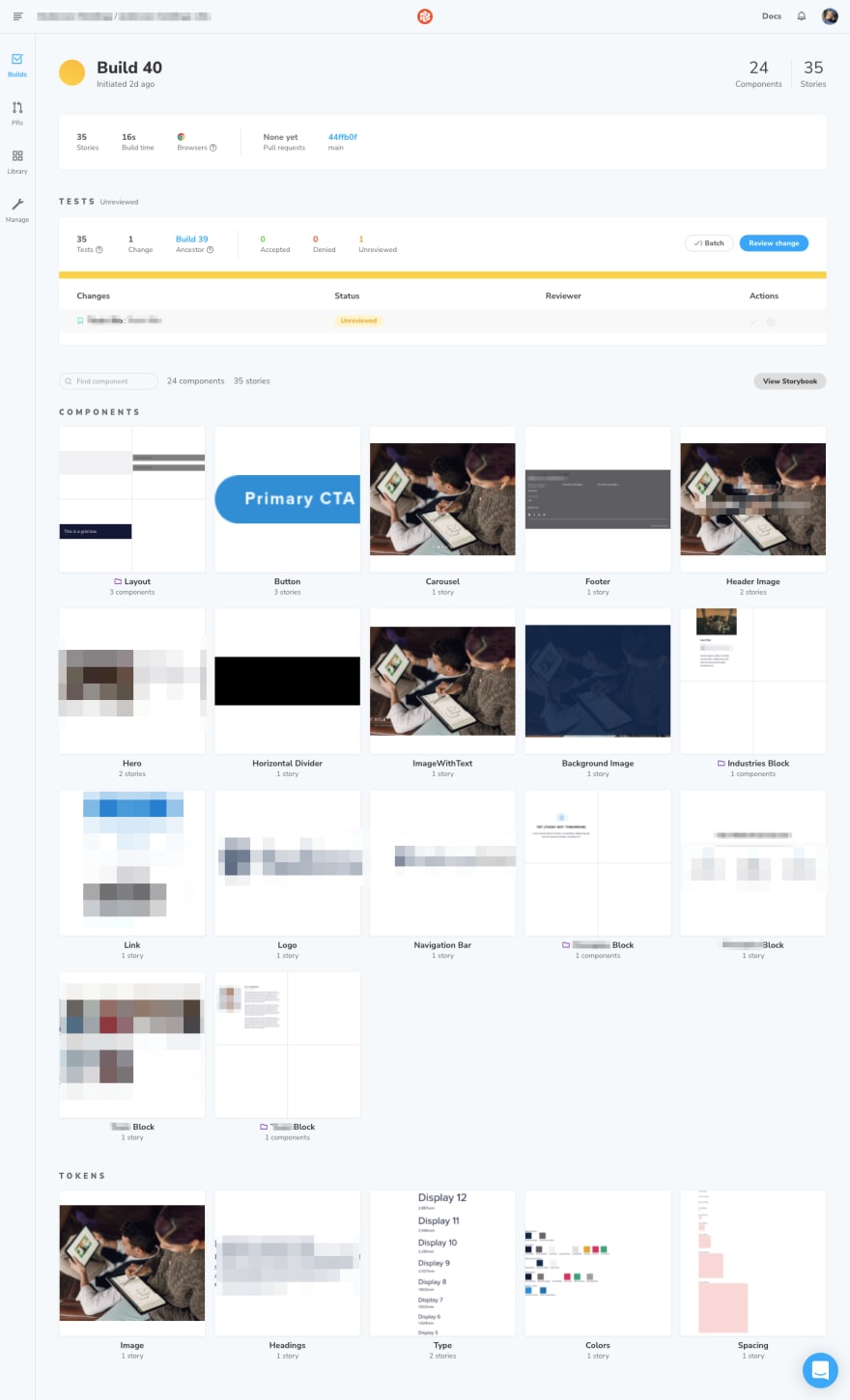 One of the gotchas is that you need to commit and run on the same branch to capture the "before" and "after" of visual component changes. That means you need to have a history of running Chromatic on your main or a specific PR for every commit you make. 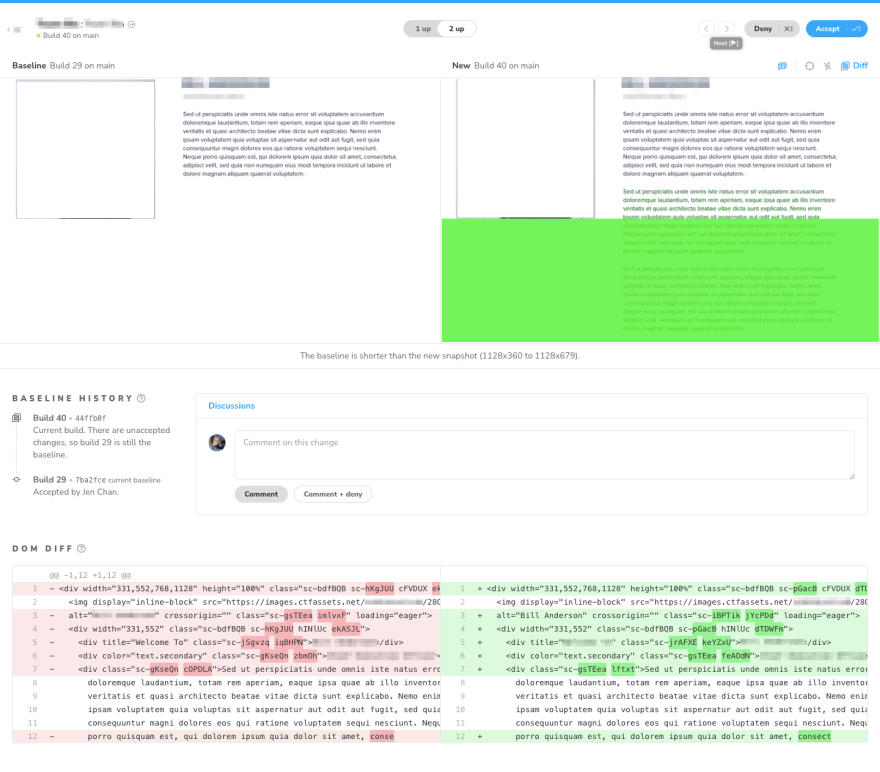 Teammates can be added as developer, viewer, and reviewer roles who can "Accept" or "Deny" the changes presented in snapshots.

It's best used with designers and QA folks have have the capacity to perform UI reviews. Here's me, reviewing my own. 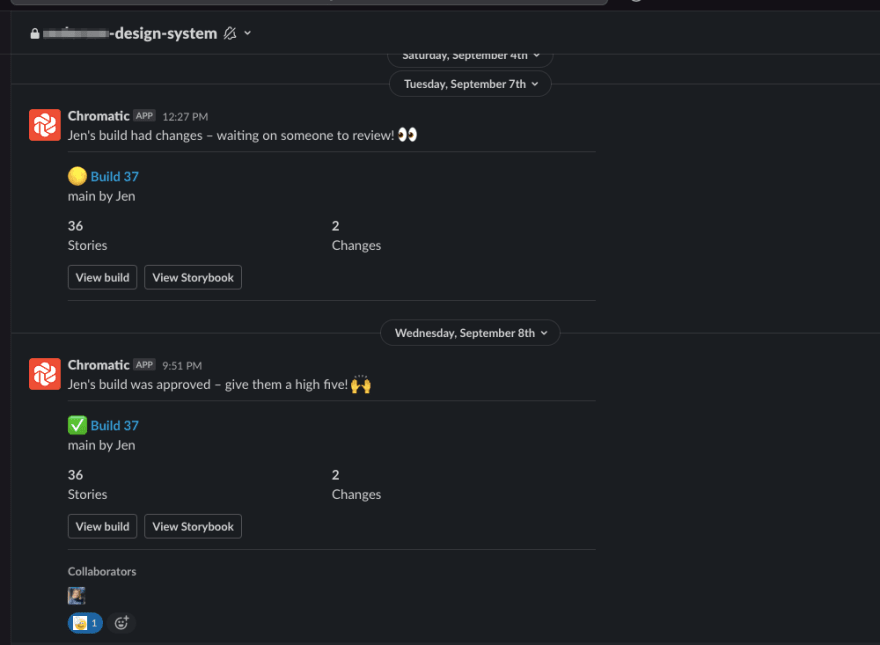 That's a Slack hook for build and UI Review results.

It seems extra but when there's many components that need small changes, this quickly becomes helpful for making developer acceptance testing faster.

Until we train AI to calculate the congruence of built UIs matching a design pixel-perfectly or the animated prototype perfectly... we'll still need humans to identify visual regressions.

Assuming you have buy-in and dedicated resources for development of design systems, then Chromatic is a very useful tool that would save you the repetitive activity of going through BrowserStack for cross-browser testing.

useRef vs useState hook in React