Some weeks ago, the Heroku’s GitHub integration was deactivated due to an issue where some tokens of private repositories in GitHub were compromised and attackers were potentially able to download and access source code of those repositories. More info regarding the issue in a blog post from Heroku.

There are many posts, threads on Twitter and videos about alternatives to Heroku, however, for those who want to keep using it as platform provider with a similar behaviour as the official integration, there are some alternatives without put too much effort on it like using GitHub actions.

Deploy to Heroku is a GitHub action that allow to deploy to Heroku by using NodeJS commands under the hoods. The official documentation is pretty clear and complete, so to use this action (as any other action 😛) we just need to follow some basic steps.

In this case we are going to use The Procfile | Heroku Dev Center but there are also options to application using docker configurations. 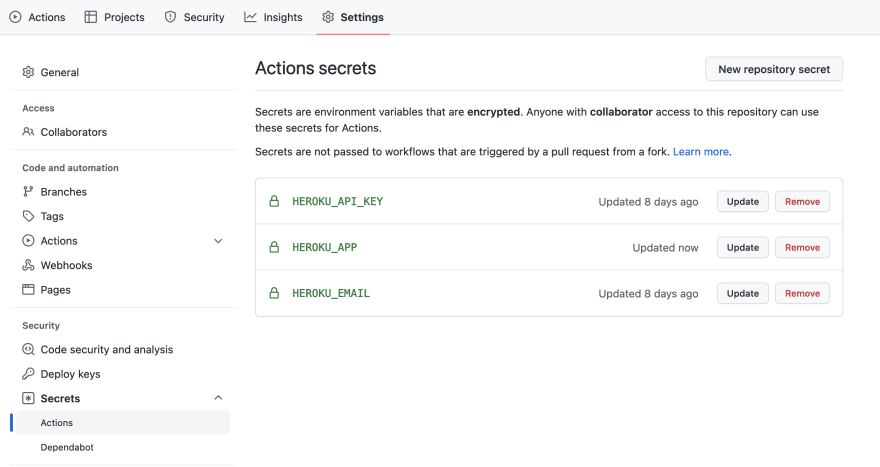 I have tried other options to make a deployment to Heroku from GitHub like using the Heroku CLI commands directly but in terms of simplicity and easiness I believe this is one of the easiest way to get close to how it was working before with the official integration.

How to Detect Duplicate Code in a Project!

[Discussion] Give the challenges you have faced as a programmer

Once suspended, jeissonflorez29 will not be able to comment or publish posts until their suspension is removed.

Once unsuspended, jeissonflorez29 will be able to comment and publish posts again.

Once unpublished, all posts by jeissonflorez29 will become hidden and only accessible to themselves.

If jeissonflorez29 is not suspended, they can still re-publish their posts from their dashboard.