Some context and history

Almost 2 years ago, I started experimenting with QuickSight to solve some of the BI issues of the company I was working for. I appreciated QuickSight's first-class integration with many AWS data services and low cost in comparison to other similar tools. It afforded us the ability to rapidly prototype analyses and dashboards. One glaring missing feature that left us scratching our heads was the lack of DynamoDB has a data source option.

I asked the StackOverflow hive-mind how to Visualize DynamoDB in AWS Quicksight on StackOverflow and it has become the most upvoted QuickSight question on the platform because there is a demand for this feature and there was no direct answer... until recently.

Most of the work-around solutions proposed involved exporting (i.e. duplicating) your DynamoDB data to a different repository such as S3 or RDS that could then be added as a data source in QuickSight. We ended up creating scheduled Glue jobs that would move DynamoDB data to S3. The S3 data was then crawled via AWS Glue Crawlers and exposed as AWS Athena tables which were then added as Quick Sight data sets. This worked but was more custom infrastructure than was desirable and also didn't allow for real time direct queries.

In late 2019, AWS announced you could query any datasource with Amazon Athena's new federated query feature.. This was cool and they even showed in diagrams the concept of querying DynamoDB but this required us to develop and maintain our own implementation of this connector and also this feature was only in Preview and AWS QuickSight integration was not updated to allow the usage of this new Athena feature.

In March 2020, I saw that AWS Athena announced a prebuilt Data Connector for DynamoDB. This was exciting as I was able to quickly setup a data connector in Athena that could actually view and query DynamoDB data without any custom code but this feature was still in Preview and there was no support in QuickSight yet.

Fast forward, it's a year later and Athena Data Connectors have been become GA with the Athena Engine Version 2 in a handful of regions and the integration features in QuickSight that allow you to select the required Athena work groups and data sources are present.

This should be enough to make things work until DynamoDB becomes a first-class data source in Amazon QuickSight.

Using the Athena Data Connectors as part of Athena Engine Version 2, I was able to finally visualize DynamoDB data in QuickSight without creating any bespoke resources or duplicating the data to another data source.

If you don't already have an Athena workgroup that uses Athena Engine Version 2, this needs to be created.

At the time of this writing, the default primary workgroup uses Athena Engine Version 1 but they also indicate that these workgroups will be automatically upgraded at some point in the future.

Ain't nobody got time for AWS to upgrade so we need to go ahead (create, if needed) and switch to a workgroup that uses Athena Engine Version 2.

Once we an Athena Engine version 2 workgroup created, let's go ahead and create our DynamoDB Athena Data Connector.

The Athena Data Connector works by invoking a Lambda to query and return DynamoDB data. Therefore we need to give QuickSight's service role permissions to invoke the Lambda function.

Configuring QuickSight to use the new connector

Now, let's get this working with QuickSight! 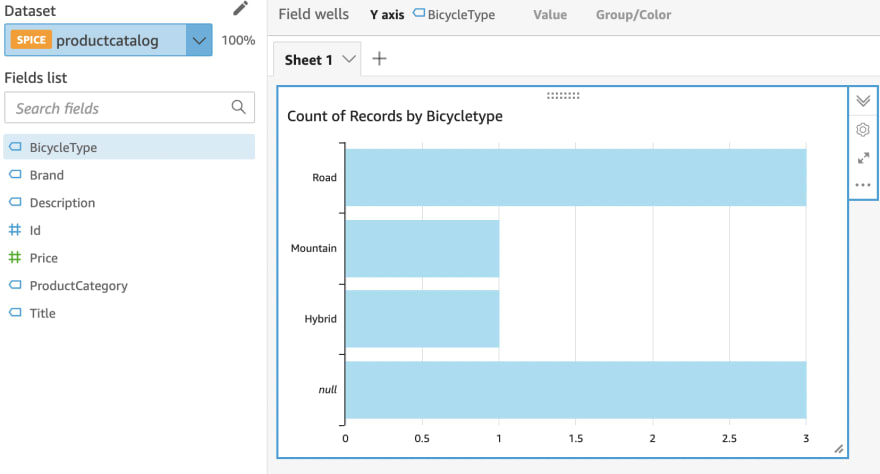 I am just using a tiny sample DynamoDB dataset for this example so it's not the most interesting visualization but hopefully you get the idea!

It's been a long time coming but glad it's finally possible to get DynamoDB data into QuickSight without custom resources and duplicate data. This is just one example of the many data sources that can now be more easily be added via the Athena Engine Version 2 data connectors and the new ability to choose Athena workgroups and Athena catalogs in QuickSight.

I'm sure this article will eventually be obsolete sooner rather than later as technology changes and Amazon continues to release new features but it was a good exercise to explore some of these new features.

Please feel free to drop me a line if this was helpful or if I you have any suggestions on thing that could be improved or added.