It is always complicated for beginners to understand and implement redux. It is a complex library. But it is essential to understand redux properly because its implementation is not easy either. In this article, we will discuss more redux.

As mentioned earlier, Redux is a state management library for React. In simple words, it is a store that stores the global state of the application.

React provides in-built support for managing the state of a component. It is okay to use the in-built support if the application is small. But with larger and complicated applications that have several components and state is required to be shared among them, we need something powerful like redux.

The state of the entire application resides at one place and that place is called Store. If you are familiar with React, then definitely know what state is.

The state controls the behavior of react components. The store provides three powerful methods that are very useful while working with the state. These methods are:

The dispatch method is used to dispatch actions (We will discuss actions later) while the getState() method gives us access to the global state of the application. The subscribe method registers listeners. The first two methods are more used in the application because dispatching actions and accessing the state are required frequently.

The user interface is not related to redux but it is where a change takes place. The state of the application defines the UI.

From the UI, actions are dispatched using the dispatch method. Now, the actions define the change.

An action is a plain JavaScript object. It has one mandatory property called "type". This type property has information regarding the change. Moreover, an action can also have a "payload" property to hold data.

A reducer is responsible for changing the state according to the dispatched action. The action will contain its type and optional payload and it is the reducer that defines how the state is going to change.

Let's understand the working of redux with the help of a simple example.

To install redux, use the following command.

Now, we will create a very basic react + redux application to understand the basic concepts. Observe the following code. 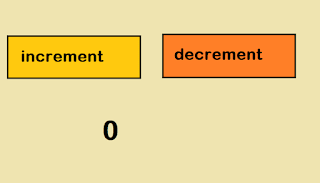 There are two components - Button and Display. Whenever one of the buttons is clicked, the value in the Display components changes. We will create a global state for this to work.

The reducer has two parameters - state and action. We have to use the switch loop for iterating over the action and according to the type, the state is updated. Remember, the reducer should only calculate the new state without modifying the already existing state.

Next, observe the store.

Now, we are ready to dispatch actions.

To dispatch an action, we have the dispatch method. But in the Button component, we will use the "useDispatch" hook for dispatching actions.

We are directly providing the actions inside the onClick handler like this.

Remember we have to provide the type while dispatching an action.

Now, when the button is clicked, an action is dispatched and according to its type, the reducer will do its work. In the end, the state will be updated in the store.

So now, the store has the initial state (count = 0). When the action is dispatched from the Button component, the reducer updates the state according to the type of action. Then, we can access the state wherever we want.

How to make an npm package with an automated workflow

Once suspended, javinpaul will not be able to comment or publish posts until their suspension is removed.

Once unsuspended, javinpaul will be able to comment and publish posts again.

Once unpublished, all posts by javinpaul will become hidden and only accessible to themselves.

If javinpaul is not suspended, they can still re-publish their posts from their dashboard.

Once unpublished, this post will become invisible to the public and only accessible to javinpaul.

Thanks for keeping DEV Community safe. Here is what you can do to flag javinpaul:

Unflagging javinpaul will restore default visibility to their posts.