Big O is fundamental in the world of computer science, yet many developers and engineers often struggle to understand it.

Most people know its important, and its commonly something software engineers to ruminate upon, exaggerating the complexity and difficulties in understanding and using Big O.
This fear can often results in avoidance of the topic.

Let's stop fearing it, and start getting excited about it. Big O can be a helpful tool to help developers and software engineers to improve the quality and efficiency of code. 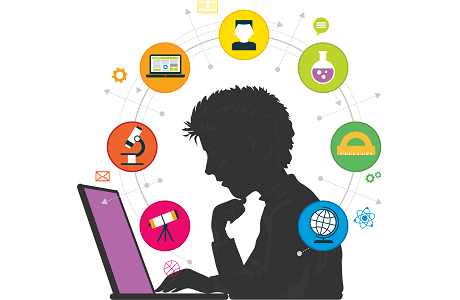 Here we will focus Big O are in terms of time complexity since this is what most people are referring to when discussing Big O.

Algorithms are programmatic operations that performs a computation to calculate a value or values. 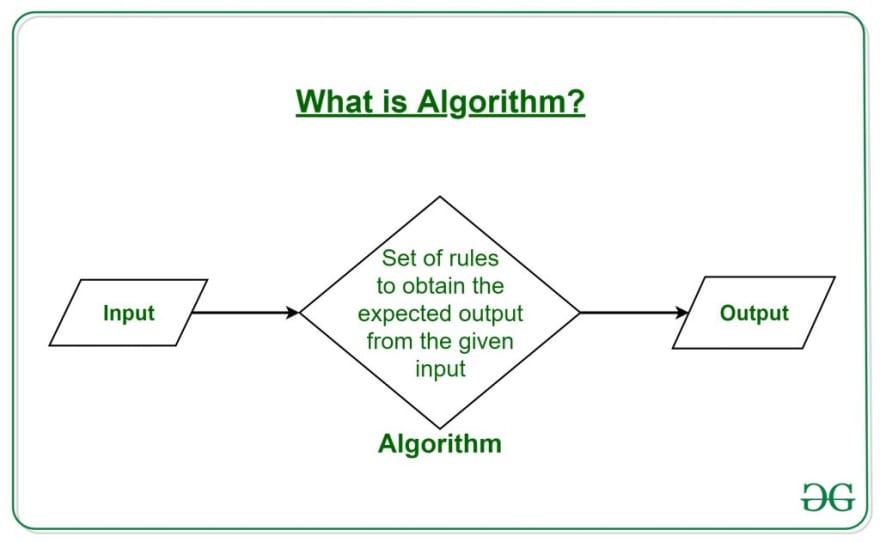 Big O is the standard notation computer scientists use to define, discuss, compare and quantify the performance of algorithms using mathematical terms.

Complexity analysis is a tool for determining how an algorithm responds to increasing inputs. It can be defined in terms of both spacial efficiency as well as time complexity. 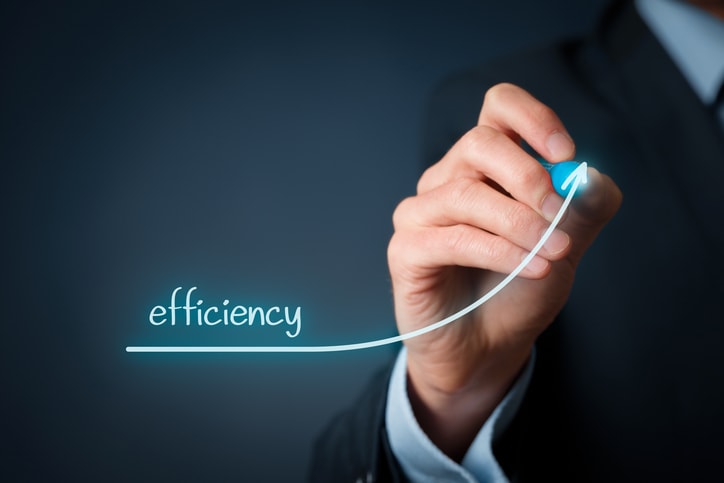 Note: this article, we will be focusing on time complexity

The speed at which a computer can execute (complete) and algorithm is impacted by a wide variety of factors:

The key idea here is that finite execution speed is highly variable. When we calculate an algorithms time complexity we simplify the calculation to only include the specific instructions executed as a direct result of an algorithm, ignoring all the factors that may impact execution speed when they are outside the scope of the algorithm.

Calculating an algorithm's time complexity begins by breaking down the operation into individual steps.

In the context of big O and algorithmic complexity...

The goal is to break down an algorithm into the smallest unit of work that a computer can perform in a single step.

One of the best ways to illustrate calculating time-complexity is to work through a real example.

Take the maximum function below:

The function maximum defined above is an example of an algorithm. It is a strictly defined process for finding the largest value in a collection of numbers.

... and continuing the loop block until the loops terminating condition (i <arr.length) is reached.

So given the maximum algorithm:

Remember: we are time complexity is quantifying how an algorithm responds to an increasing input

Given the above, we can state objectively that the maximum function has

Or as a mathematical function where n represents the size of the input: f(n) = 4n + 4

After distinguishing the individual steps of an algorithm, we need to determine how those execution steps are affected by different types of input.

We start evaluating input types with what is called the worst-case scenario. In terms of time-complexity, the worst case scenario refers to an input that would require the most operations to complete. 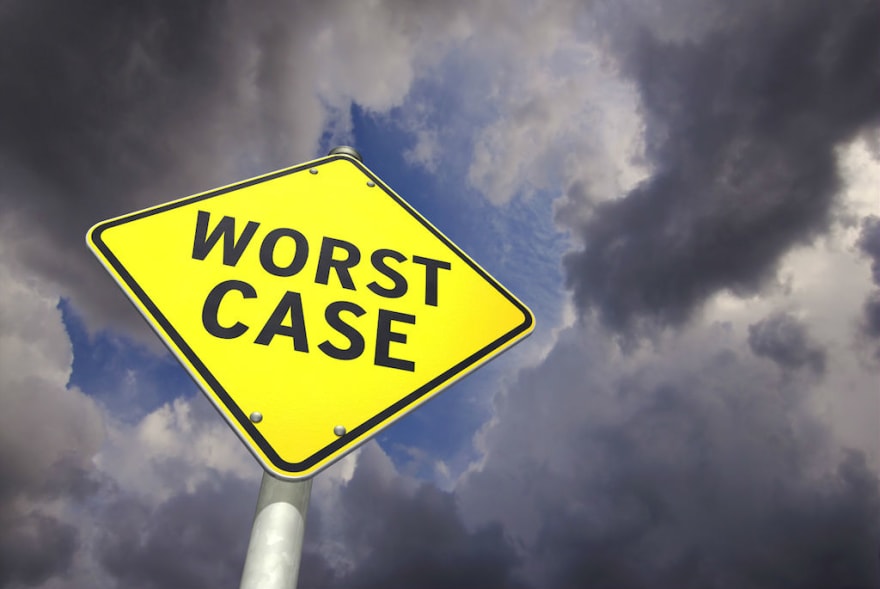 In the example of the maximum function, the worst-case scenario would be the scenario in which the input array was sorted smallest to largest, which would require every iteration through the for loop to evaluate the if (arr[i] > max) as true, and thus executing an additional steps defined inside the if block.

In complexity analysis, we are primarily concerned with how the function (f(n)) behaves as the input (n) grows.

So the next step in calculating the time-complexity is to eliminate (ignore) all the independent variables (the steps that occur regardless of the input size) from the equation. 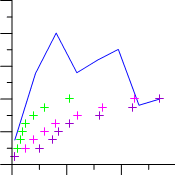 In the case of the mathematical function defined earlier (f(n) = 6n + 4), 4 is constant regardless of the input size, however the 6n grows directly as the size of the input grows larger. We refer to these independent operations as 4 "initialization constants".

Initialization constants are the steps of an algorithm that will execute regardless of the size of the input. Including "behind the scene" initialization operations like the virtual machine required for Java.

When we remove our initialization constants, our mathematical function for maximum is stated simply as f(n) = 6n

We remove initialization constants because these steps are not affected by the input size, or the input values. Instead they are a direct result of the syntax and rules of a high-level programming language. Initialization constant can vary quite dramatically from one language to another, and do not help to clarify how an algorithm responds to increasing input sizes (time complexity).

Given this behavior we can conclude:

Now to take everything that we've discussed an put it in the computer science language of Big O is pretty simple. Essentially we've already done it.

... and this would continue as the exponents representing the function grows.

The difference here is between O and θ really comes down to how much variability there is in the equation.

The .find method iterates through every element in the array, and return the first element that matches the provided logical comparison.

Under the hood, the .find function is performing the following:

There are 3 primary types of bounds in asymptotic functions:

This can be broken down further between O vs. o and Ω vs ꞷ or "big O vs little O" and "big omega vs little omega":

Tight refers to how accurate the mathematical function representing the asymptotic complexity is for a given algorithm.

The best way to learn is to do it, so join me in taking apart a sorting algorithm and examining its asymptotic time-complexity.

There are numerous realistic and practical application for sorting algorithms, and like many algorithms, there is multiple ways to tackle the same problem.

A "selection sort" algorithm takes an input, and sorts it according to some arbitrary value. Take a number selection sorting algorithm like the one below:

The basic sorting function (selectionSort) defined above sorts values from smallest to largest by:

Challenge Go ahead and see if you can calculate the complexity (in big O notation and θ notation) yourself.

Recall, we mathematically determine complexity by:

Walking through the Selection Sort

The while loop that states we continue looping until every element from inputArr has been removed. Then with each iteration through the while loop, a nested for loop through the same collection of elements is executed to find the smallest value.

In the worse case scenario both loops are executed 5 times for an input with 5 elements. In terms of a mathematical function, we could represent this as f(n) = n * n or f(n) = n².

The sorting algorithm outlined above is a highly inefficient method of sorting 🧠 If you are up for a challenge, see if you can think of a more efficient algorithm for sorting numbers 🧠

Recursion refers to the process in which a function calls itself to determine the end result. Recursion occurs very commonly, you'll find recursive functions in:

One of the simplest examples of a recursive algorithm is factorials. A factorial is a defined as the product of every integer between a number and 0. So determining the factorials of 1 through 5 would look like:

Functionally, we would calculate a factorial using recursion.

Given the above function, can you determine the asymptotic complexity?

The factorial(number) function above does not have any loops. Previously algorithms without any loops had a constant runtime, however with the factorial(number) function, this is not the case. As you can imagine the greater the input value, the greater the number of execution steps, and the simple recursive function above would have a linear complexity or complexity of θ(n).

This begs the question: Do recursive functions always have linear complexities?

Another recursive function referred to as "binary search" is slightly more complicated. In binary search algorithms, the function receives a collection of sorted values. Since the input to the function is sorted, some optimizations can be made to more quickly find the desired value.

Here we begin by checking the value at the middle of the array to see if it is the target. If it is, the function has found the target and should return the index. If not, we see if the value of the middle of the array is less than or greater than the target. Then we change our search parameters (start and end) to inspect the right-side (higher numbers) or left-side (lower number) of array. With each iteration through the while loop, n or the number elements (relevant input) shrinks.

So with each iteration through the recursive algorithm, the number of elements inspected shrinks by a factor of 2. Or as a mathematical function: f(n) = n / (2 ^ i) / f(n) = n / 2ⁱ where i represents the iteration.

Let's represent the iteration with i:

But what is the value of i for a given input n?

That's may seem kinda messy, but given this information we can solve for n using 1 = n/2ⁱ. Multiply both side of the equation by 2, we get 2ⁱ = n or n = 2ⁱ. Recall back to algebra, how do you define a variable in terms of the exponent it was raised to?

A logarithm answers the question "How many of this number do we multiply to get that number?"

Using logarithms, we could define the binary search algorithm above as: f(n) = n / 2 * log₂(n)

We can summarize these various algorithms with a chart to demonstrate how the algorithm responds to increasing inputs: 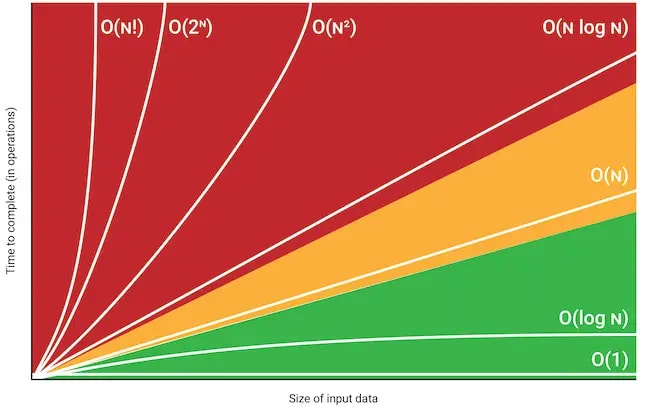 In short, here are the general rules regarding Big O and calculating algorithmic complexity

Speech Recognition and Voice Activity Detection for your Apps