We all must have used @import in our css files for importing one stylesheet to another. While working on large projects we often make use of imports to make use of same styles in different views.

The @import statement has some pros and cons related to it. Let's first discuss how the import works over using the <link> element in HTML file.

So let's try to understand the difference between using @import and <link> element to load CSS files followed by the pros and cons of @import statement. 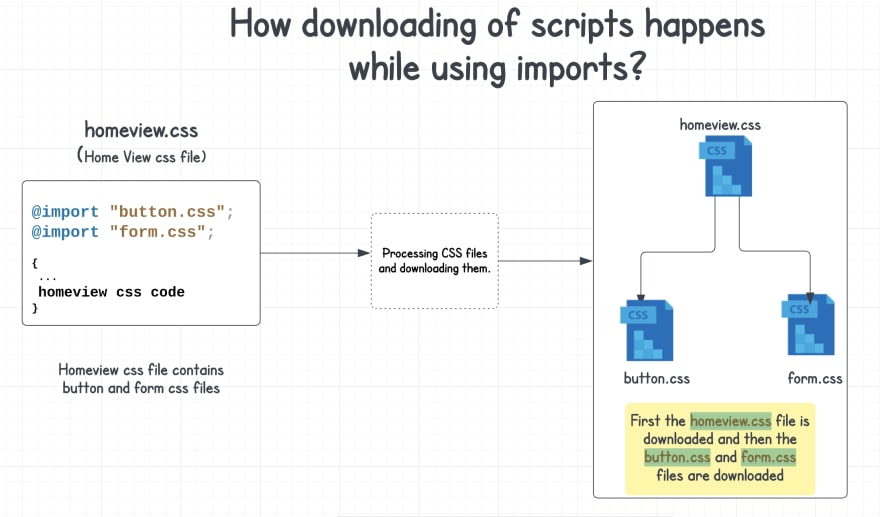 In the above example we can see that importing stylesheet into one another builds dependency graph. Due to this dependency tree the base css file which is homeview.css is downloaded first and then the dependent css files are downloaded which are button.css and form.css.

When the stylesheets are loaded using link elements they are downloaded at the same time which can be used to combine them into single file.

We have covered the major difference between the two approaches now let's focus on the pros and cons of @import statement.

The only negative that comes with @import statement is increasing the page load time if not used during build process. As it goes and reads the imports and then applies them. Although the time difference is very small but can impact your search ranking where the bots use page loading time to calculate ranking.

I tried to cover all the major points which defines the flow and working of CSS @import statement in brief. 😊
Do let me know if I missed something 😉

Apollo Supergraph: A GraphQL stack for everything