A while ago I created a Shopify shop for my little brother who is selling handmade, unique furniture: glückweiser.de (all German; currently mainly selling on Etsy). It is written in NextJS 12 and uses Shopify's GraphQL Storefront API. The Developer Experience (DX) is okay. Everything is nice and typesafe with Typescript, graphql-codegen and react-query. BUT it is quite some manual work. Especially dealing with the cart. Initializing it, storing the id, updating etc.

I like trying out new things and this is why I thought I'll give Shopify Hydrogen a shot and recreate the shop using it. In this article, I want to share my experiences and thoughts after a few days of coding in Hydrogen.

What is Shopify Hydrogen?

Before I go ahead and share my experiences, I want to give a quick intro to Hydrogen:

These are the main features as per the Hydrogen website: 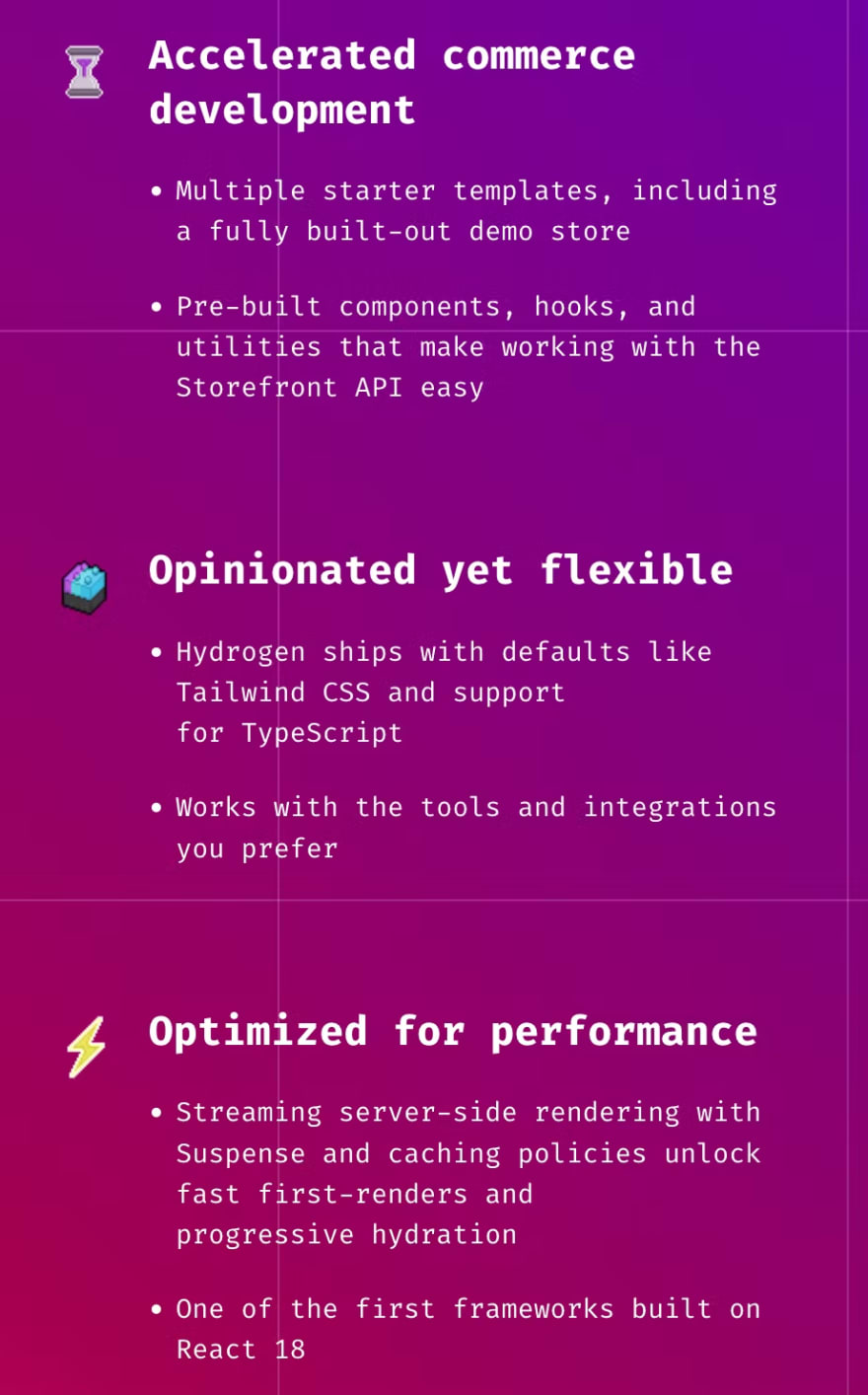 I would say its main selling point is obviously the integration with Shopify. It comes with hooks, components and types to make it really easy to interact with the Shopify API. (They also use an XState state machine for the cart.)

In addition to that, Hydrogen comes with out-of-the-box support for Tailwind and Typescript.

Let us start with the pros of using Hydrogen first:

As mentioned previously, this is the main selling point in my eyes. You configure your Shopify integration in hydrogen.config.ts and can start using hooks like useShopQuery that let you fetch data from the Storefront API. The types are also shipped with Hydrogen.

Besides that, it comes with handy components that are required for almost any shop: Money, AddToCartButton, Image and many more.

This nice integration lets you get started pretty quickly.

Hydrogen components are primitives. Hydrogen doesn't provide components like Cart or ProductPage. They are different for most shops anyway. Instead, Hydrogen provides small building blocks. These can be styled and customized easily with Tailwind (and most likely CSS). They are focused on functionality rather than design (which makes sense).

In addition to that, Vite is also probably one of the most modern dev- and build tools out there. (At least until Turbopack will eventually takes over 🤪)

Besides the pros, there are also some cons:

It is always painful if a development environment is very different from the production environment. This opens the doors for bugs in production that you were not able to catch during development.

Unfortunately, this is exactly my experience: In production, I started seeing errors that my client components could not be found. That crashed the whole app. I was able to fix this be adding { optimizeBoundaries: false } to the hydrogen Vite plugin – but I have honestly no idea what this is doing and what other implications it might have.

Another issue: I created an API route for sending emails. I was using nodemailer for that. Everything works fine in dev, but I saw various errors when trying to build the app. It took me a while to find out that Hydrogen is creating edge functions for API routes. Edge functions only provide a limited feature set and therefore some node internals were not working.

I made it work by ditching nodemailer and using the Mailgun API with fetch directly. It worked on dev, and the bundling also succeeded but it failed after deployment (on Vercel) because the environment variables could not be found anymore (yes, I have added them to Vercel).

The DX is lacking and I was encountering multiple such issues... A huge bummer for me.

You can imagine that I was reading the docs and API references a lot. The API routes are explained in a few sentences. Potential limitations or something were not covered, edge functions or worker environments were not mentioned. I had to figure out a lot of stuff myself...

I think Hydrogen has a high potential and I would probably default to it for creating custom Shopify shops. But the DX is not there yet. I encountered too many roadblocks that took me a while to resolve.

I would prefer to have the primitives and nice Shopify integration without having to adapt a whole new framework. I think this is exactly what Hydrogen UI is about (not in beta yet and I am not sure which features are Hydrogen and which are Hydrogen UI). I would really like to have Hydrogen features be easily usable in NextJS. I wonder if it would have been a better idea for Shopify to focus on something like Hydrogen UI rather than creating a full framework. All the Vite SSR stuff is the most complicated of Hydrogen for sure. Maybe that has something to do with Shopify's Oxygen – the recommended deployment target for Hydrogen? I don't know...

Most likely Hydrogen will improve a lot in the future but I currently have a bad gut feeling about fully committing to it after my initial experiences...

Once suspended, jannikwempe will not be able to comment or publish posts until their suspension is removed.

Once unsuspended, jannikwempe will be able to comment and publish posts again.

Once unpublished, all posts by jannikwempe will become hidden and only accessible to themselves.

If jannikwempe is not suspended, they can still re-publish their posts from their dashboard.

Once unpublished, this post will become invisible to the public and only accessible to Jannik Wempe.

Thanks for keeping DEV Community 👩‍💻👨‍💻 safe. Here is what you can do to flag jannikwempe:

Unflagging jannikwempe will restore default visibility to their posts.