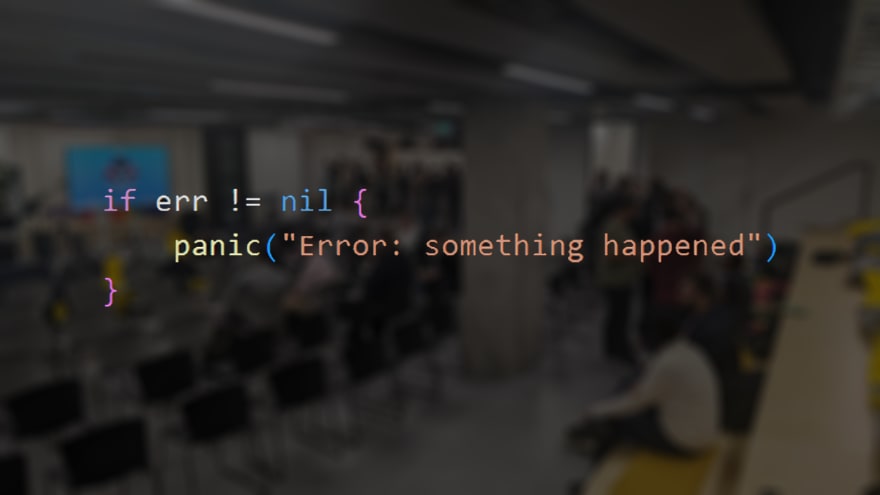 Code smell is any characteristic in the source code of a program that possibly indicates a deeper problem -According to Wikipedia.

Last week, we hosted the second London Gophers event since the post-pandemic restart. Monzo Bank were our venue hosts and their event space is outstanding! 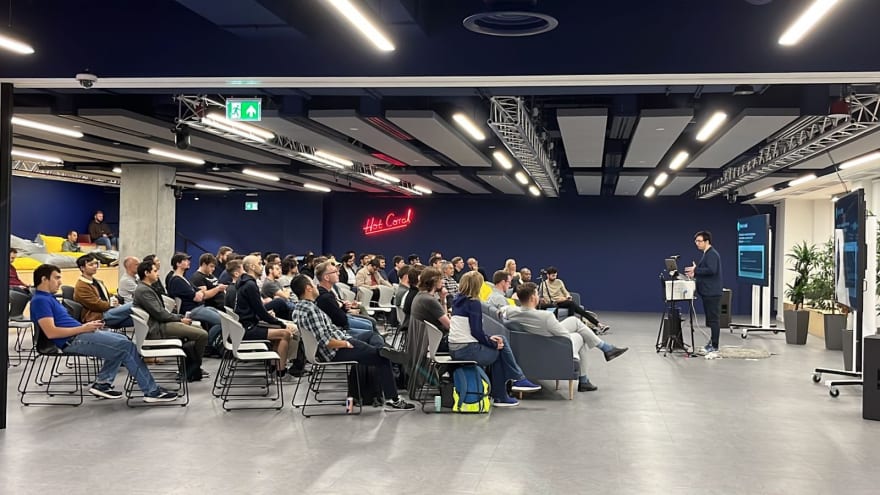 Looking cool Joker! The team, the venue support, the speakers, everyone did an excellent job! Still, something was bugging the back of my mind.

During the event and after, I noticed a few things:

Now, you could easily dismiss all the above if you wanted to. It was a Wednesday night; we ended at 8:30pm, there was plenty of time to chat and network during the event and not everybody is quiet-quitting.

However, especially on point three, I remembered what a friend told me about her first experience at a tech meetup. Before she became more established, she felt ignored, that she didn’t belong and she and her friend usually left early.

Yet on the surface, everything seems fine and everybody I spoke to on the night seemed to have enjoyed themselves. That’s what I mean by code-smelly. Spaghetti holds together some of the greatest websites, apps and technology. However, if you don’t address it for too long, you may end up with serious problems down the line.

In theory, everything could be ‘fine’ now and perhaps my suspicions are simply that, but it couldn’t hurt to look?

To stick with the theme of applying work terminology to a social event, I asked three groups of attendees about their experience with our meetup and other tech meetups. (This would include pre-pandemic)

To those who were around pre-pandemic, London Gophers was a lot bigger than it is now. 200-300 people per month and within 1-2 hours of the announcement on Twitter, all spaces would be full.

One member noted how they used to refresh constantly in order to get a spot and how he’d heard stories of how some had set up bots for it.

They noted they knew people who reserve a spot, only to keep it in their calendar and if nothing else showed up, they’d head to the event as a backup option.

Discoverability could be an issue. Finding out London Gophers exists and what exactly to do in order to attend. The first time you stumble across the event, it might already be full and the connection between Meetup.com and our Twitter may not be 100% apparent.

My own 2018 experience involved a friend inviting me. The only reason I got into the first event is because my friend worked at the office it was being hosted at and let me in early. Because I knew my friend, they introduced me to others and from there, I could make acquaintances. In short, I had a lot of the hard work done for me.

A common theme was one of not belonging. Especially, if early in their career, this feeling was one that was felt at most tech meetups.

In an environment that is heavily weighted in one direction, being ‘different’ can lead to people not treating you equally, or in the very worst cases, making you feel unsafe.

Several of them had even given up going to any tech events, as they spend all day working in an environment where they are the only one like them there. To go to a tech event is to essentially ‘be at work’ in your free time, except now there isn’t the implied safety of a work environment. It doesn’t seem worth the hassle.

Are There Any Actions From This?

Those are only a few perspectives and a small snippet of the information I got from my investigation. It gleamed a light on our own event, and what the perception of ‘tech’ events can be for some in the community.

I wanted to see if there was a way we could address and improve upon what we have and to shift the perception of our ‘tech meetup’ to one where people can feel welcome. I talked with the team and we came up with a few ideas.

A trap you can fall into is acting the same way you did previously, even though circumstances have changed. When London Gophers had around 200-300 attendees, a drop of 30 was less noticeable and a good amount of new people could still attend the event.

Now, when the maximum is 100 and 30 people do not show, that’s more noticeable. Plus, 30 people on the waitlist who may have wanted to go didn’t have the chance to.

So, we’re going to keep track of the no-shows. We understand that life is chaotic and anything can happen, which is why, at first, we’ll send a warning and it is only the second time this occurs that we will prioritize giving their spot to someone on the waitlist.

To us, that feels fair, but I’d be interested in your opinions.

On first impressions alone, if you wanted to create a post about a unicorn emoji generator, and it was your first ever post, which site would you feel more comfortable posting to?. Dev.to, Medium or HackerNews?

The way people perceive your community can influence who gets involved. For some, tech events already have a certain perception that make them completely off putting.

If you visit our Twitter and Meetup Page. What impression does it give? Is it a welcoming space? Are the organizers easy to contact? What are our values? How do you make friends? How do you get involved with the community?

I’m not sure. I feel I’ve been within the bubble for long enough that I may have become out of touch with the struggles someone new may have getting involved in our community.

I believe it’s something we can work on. To start, we are going to communicate clearly that we operate under the Go Community Code of Conduct both online and off. We take this seriously and we want people to feel comfortable approaching us to ask for help.

We’ve done outreach to other similar meetups in London to see in what ways we can work together. Here’s an example of some of the slides we put together to show who we are. #WIP 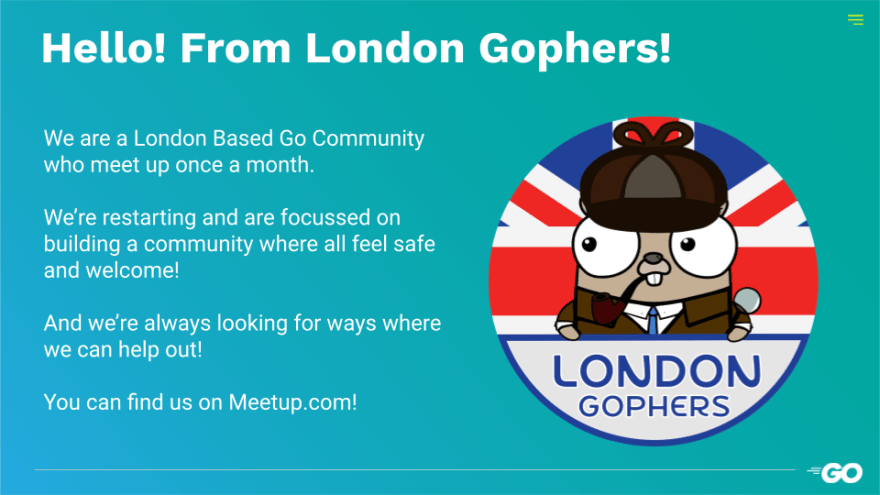 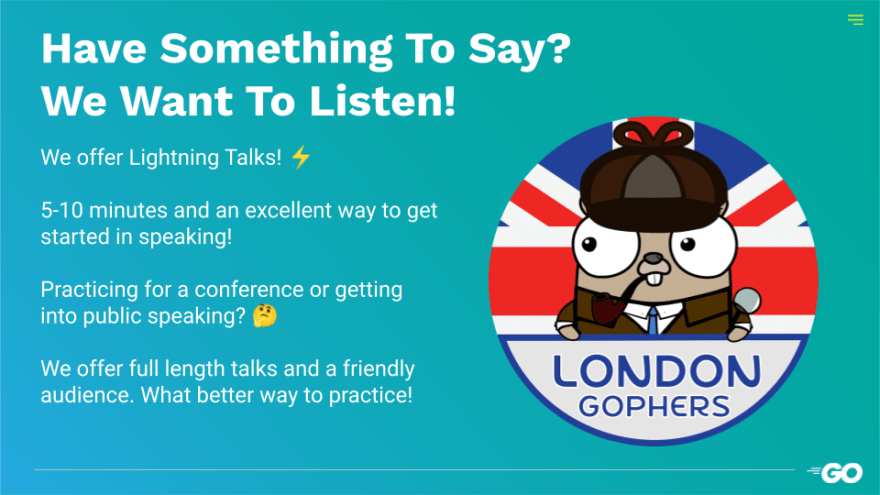 We have a first-come first-serve queuing system at the moment. Now perhaps it’s fair. We give everyone equal warning, let people know the day before and list when RSVPs open on the event.

However, the person who will most benefit from our system is someone who is already aware of the meetup or has already gone to the event before. If you’re new, you wouldn’t know how quickly spaces can fill up and you may not even have a Meetup account.

To those who may feel unsure about attending, they may want to see who is attending the event before signing up.

So what is a priority queue? Well, for now it’s this: We will reserve 20% of the attendee spots at our events for those who are underrepresented in tech. If they join the waitlist and there is a reserved spot open, we will bump them into going. These reserved spots last until the week of the event.

We hope that by doing this, it will allow others the opportunity to attend future events.

Welp, Time to Test in Production

Since there isn’t a staging environment in real life, the only way we can see if any of the above helps with the code-smell is by testing it live. Yes, I see the irony.

Obviously, we can’t be sure of the causes of the code-smell and whether any of this will help or make things worse.

However, I believe that making a mistake is fine, as long as you can learn from it. We can spend too much time agreeing that there is a problem, instead of attempting to address it, because what if the thing we try doesn’t work?

Well, then I guess we’ll try again. I’ll report back once the results are in and we’ll see what way the needle shifts.

Anywho, thanks for reading.

Benjamin Bryant
👋🏿 #go & #devrel Twitter: @Jaminologist 🖨️ Organizer of LondonGophers 🐻 Developer Advocate @JetBrains 🌱. Posts Weekly.
October Gophers: The Rundown
#go #writing #community
What is a Proposal Document and Why is it Awesome for Meetups?
#community #productivity #devrel #discuss
What Do You Do To Ensure You're Conducting a Great Interview?
#career #watercooler #writing

Once suspended, jaminologist will not be able to comment or publish posts until their suspension is removed.

Once unsuspended, jaminologist will be able to comment and publish posts again.

Once unpublished, all posts by jaminologist will become hidden and only accessible to themselves.

If jaminologist is not suspended, they can still re-publish their posts from their dashboard.

Once unpublished, this post will become invisible to the public and only accessible to Benjamin Bryant.

Thanks for keeping DEV Community 👩‍💻👨‍💻 safe. Here is what you can do to flag jaminologist:

Unflagging jaminologist will restore default visibility to their posts.