Design patterns are necessary (in my opinion) for you to start gaining an advanced understanding and ability to design and refactor software.

These patterns also give developers a common language to speak about certain code structures.

E.g. If you are facing a certain problem, and I say "Try the strategy pattern..." then I don't have to spend an hour explaining what you should do.

You can go look it up or, if you already know the pattern, go implement it!

Not Your Typical Design Patterns

Everyone is talking about the design patterns found in the famous gang of four book Design Patterns:

But, there are way more software design patterns not found in this book which I've found super helpful.

Some of them I've learned from Martin Fowler, others from Domain Driven Design, and other sources.

I figured I'd start to catalogue some of these by sharing them!

As a general rule, I'm going to use TypeScript for my code samples.

The pattern I want to start with is a close relative to the null object pattern that I've tweeted about before: 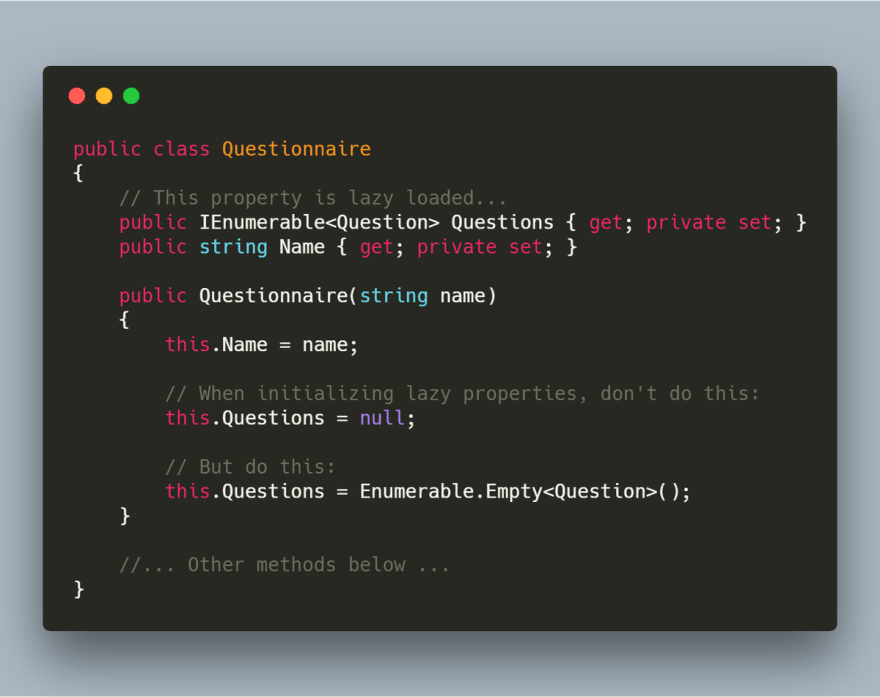 The null object pattern is a way of avoiding issues around null states (like all the extra null checking you need to do 😒).

You create a specialized version of a class to represent it in a "null" state, which exposes the same API or interface as the base object.

Here's an example off the top of my head, in TypeScript:

Imagine we had a scheduled background process that fetches multiple orders and tries to place them.

We might want a buffer period between the time when you click "place order" and when the order is really placed. This will make cancelling an order an easy process (it avoids having to remove credit card charges, etc.)

In this scenario, we might be trying to process orders that have already been changed:

The null object pattern can help with this kind of scenario.

But even better, when you have multiple versions of these kinds of "special" cases, the special case pattern is here to save the day!

The special case pattern is essentially the same in implementation, but instead of modelling specific "null" states, we can use the same technique to model any special or non-typical cases.

Using the code example above, instead of having "null" versions of our Order, by using the special case pattern we can implement more semantic and targeted variants of our Order class:

As you can see, this pattern helps us to be very specific in how we model special cases in our code.

Refactoring To The Special Case Pattern

So, when should you use the pattern?

You might consider this pattern whenever you see this type of logic in a class' constructor:

Note: The refactoring for this will begin in the Oops, Too Many Responsibilities section below.

When you see something like the following, then you may want to consider the special case pattern:

Focusing on this example, why is this potentially a "code smell"?

At face value, this type of logic should be "baked into" the Order class(es).

Whoever is using the order shouldn't have to know about this logic. This is all order specific logic. It shouldn't be "asking" the Order for details and then deciding how to use the Order.

For more, see the tell don't ask principle - which, most times, does indicate that your logic might be better suited inside the object you are using.

The first fix then is to move this logic to the inside of the Order class:

Oops, Too Many Responsibilities!

But, now we run into some issues: we are dealing with different responsibilities (placing orders, fraud detection, item corruption, etc.) in one class! 😓

Note: What follows can be applied to the constructor refactor too.

Special case pattern to the rescue!

Great! But how can we instantiate these different classes?

The beauty of design patterns is that they usually end up working together. In this case, we could use the factory pattern:

Note: This is a pretty clear example of when you would really want to use the factory pattern - which I do find can be easily over-explained. Hopefully, this helps you to see why you would want to use a factory in the first place.

We have split our Order class into a few more special classes that can each handle one special case.

Even if the logic for, let's say, processing a suspected fraudulent account/order is very complex, we have isolated that complexity into a targeted and specialized class.

As far as the consumers of the Order class(es) go - they have no idea what's going on under the covers! They can simply call order.placeOrder() and let each class handle its own special case.

Have you ever encountered the special case pattern? Or perhaps any of the others I've mentioned?

Don't forget to connect with me on:

You can also find me at my web site www.jamesmichaelhickey.com.

How to have a meaningful weekend as a programmer?

Creating a simple game with PhaserJS

Level up your presentations with Go