VCX is part of Hyperledger’s Indy and Aries projects. It’s a library for exchange of verifiable credentials written in Rust. It has also c-callable API with wrappers for iOS, Java, Node and other languages.
Our team needed to build the iOS static library from scratch and I decided to write down some notes from the process. The description of the build process is not only a good help for those who need the same, but it’s also good for understanding the build process itself which can be useful for any other library.

I won’t go into details describing all commands, I just want to provide a high-level description. If you want to see specifics, go to this repo jakubkoci/indy-vcx-build with the final Bash script or look at these two links which were my inspiration (thank you to all authors for their contribution):

You need to run a build script on Mac OS with Rust and some other libraries installed. You will find everything described in the setup.sh script.

At the end of the process, we want to have a vcx.framework folder containing a binary file compiled for all required architectures together. This binary file will be combined from libvcx library and all its dependencies libindy, libssl, libcrypto, libsodium and libzmq.

Whenever you want to build a native library, you need to select the architecture a.k.a type of processor of a device where your app, and therefore library, will be running. There are usually following options for iOS:

In my case, OpenSSL library supports only two architectures, arm64 for devices and x86_64 for a simulator, so I need to build libraries only for these two.

You can find more about architectures here:

For every 3rd party library I checkout particular repo and run a build script within it:

I take similar steps with libindy, but on top of cloning the repo, I also checkout the required version by tag:

You can spot that instead of architectures arm64 or x86_64 I use aarch64-apple-ios, x86_64-apple-ios. I call them triplets. Some libraries use the first architecture format, some use triplets, but you can see the mapping between architectures and triplets in the Architectures section above.

You can find more about architectures here:

Lipo is a command-line tool that allows us to create universal binary with more architectures in one file (called Universal Static Library, or just “fat file”). We can also use it for extracting one universal file into more files according to given architecture (“non-fat file”).

If you check the output library with lipo you will see whether it’s a fat-file or not, and what architectures it contains.

For example, in our case:

If you run this command for every library you’ll see that all 3rd party libraries are fat files with all architectures, but libindy has been built as non-fat files. We need to extract architectures from fat-files to non-fat files:

I also copied libindy from indy-sdk to a different directory. Extracting and copying helps us set environment variables which are required to build libvcx in the following way: 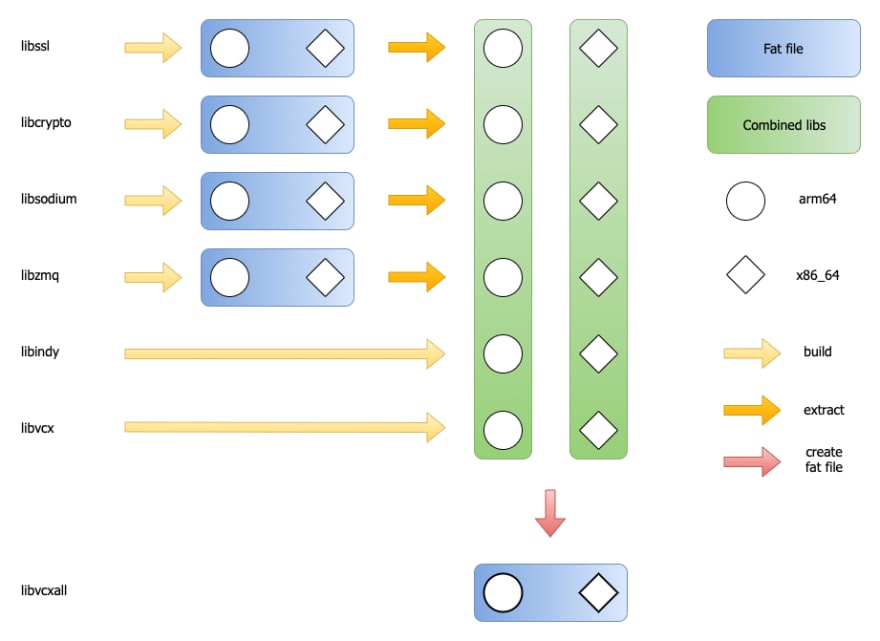 This still not over. To call output libvcxall.a library from our code we need to wrap it with Objective-C and c-callable headers. First, we copy the libvcxall.a to indy-sdk/vcx/wrappers/ios/vcx which contains these headers and then we use xcodebuild and lipo utility to create our final vcx.framework.

Yes, we’re finally done. I hope you find it helpful even if you don’t need to build the library by yourself, but were curious about the process.

How to encrypt/decrypt with AES-GCM using CryptoKit in Swift

Create and Handle Flutter Input Form like a Pro

Console.log on Chrome for iOS