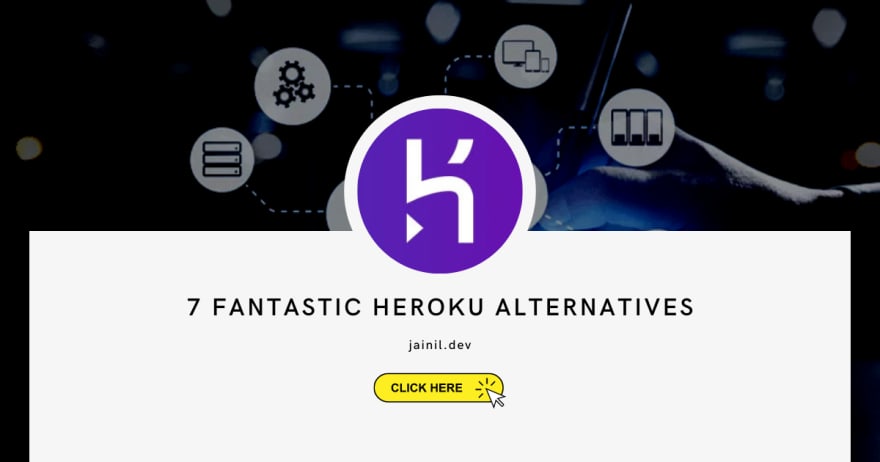 Today, Heroku is well known among developers for taking care of the infrastructure supporting applications, such as servers, databases, etc., so developers don't have to. As a result, it makes the process of creating, expanding, and deploying applications simpler. Heroku is a fully-managed, scalable cloud platform that allows developers to quickly deploy and manage apps. It is also used by businesses to host, prototype, and launch startup ideas. Its capacity to host various projects, extensive programming language support and usability contributed significantly to its popularity.

Heroku used to be one of the most well-liked PAAS choices for developers looking to launch apps for free and scale up with paid plans as necessary. Heroku recently announced, however, that as of November 28, 2022, its well-liked free tier plans would no longer be available. Many people's use of these free plans to host their apps, as well as beginners using Heroku to host app demos, and APIs, and learn how to deploy apps, will come to an end as a result, especially for independent developers, nonprofit organisations, and hobbyists.

Furthermore, as part of project Periwinkle, it has been suggested that Heroku might be replaced by Salesforce's cloud service or discontinued altogether. As a result, Heroku users are unsure of their next course of action, particularly in light of recent security breaches and outages. Users are now thinking about moving their existing apps to another platform as a result of these developments. For those looking for different options for launching their upcoming app or moving their current app, this article explores a few Heroku alternatives.

Render is a multi-cloud platform that, in terms of features and functionality, is very similar to Heroku. The platform positions itself as a rival to Heroku by providing greater flexibility, dependable pricing, and an easier user interface. You can create static apps and backend servers with Render, set up Docker containers, manage databases, and create cron jobs with ease. The platform also makes switching from Heroku simple. 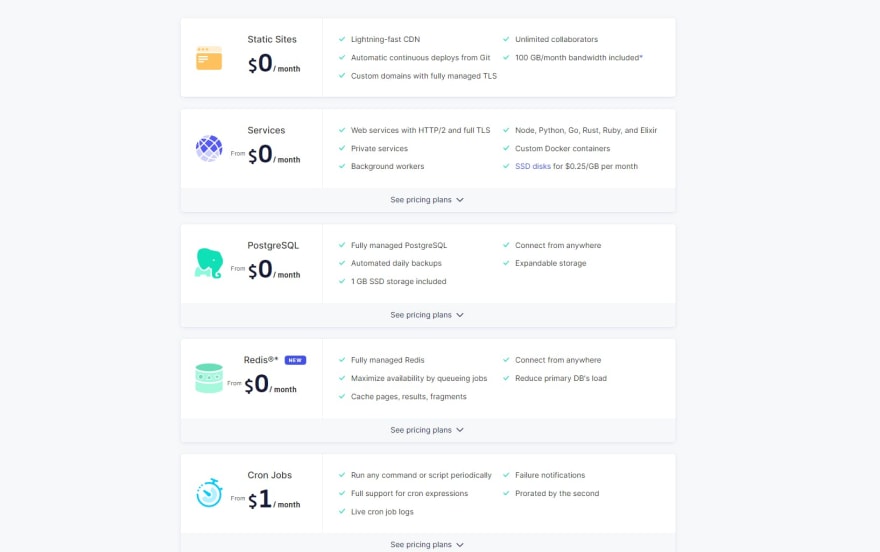 Like Heroku, Render provides free tier plans for apps with auto-sleep on inactivity (sleeps after 15 minutes, 30s spin-up). The Postgres database is free for the first 90 days; after that, the paid version begins at $7/month. Additionally, you can connect a single database to all of your apps for just $7 per month. You can set up as many apps as you want, similar to Heroku, as long as your total monthly runtime usage doesn't go over 750 hours.

Fly.io is a Docker-based platform that enables you to run full-stack applications (and databases) at the Edge, or farther from your users, without the need for operations. Additionally, Fly.io offers the precise resources required for your application to run smoothly; you simply pay for the services you actually use.

Fly.io takes pride in its ability to scale applications globally and manage service clusters, unlike Heroku, whose DX is its superpower. Furthermore, Fly.io is a CLI-first platform, so it's probably not for you if you don't like CLIs. Additionally, they have a tool that automatically migrates to Heroku, which simplifies migration. 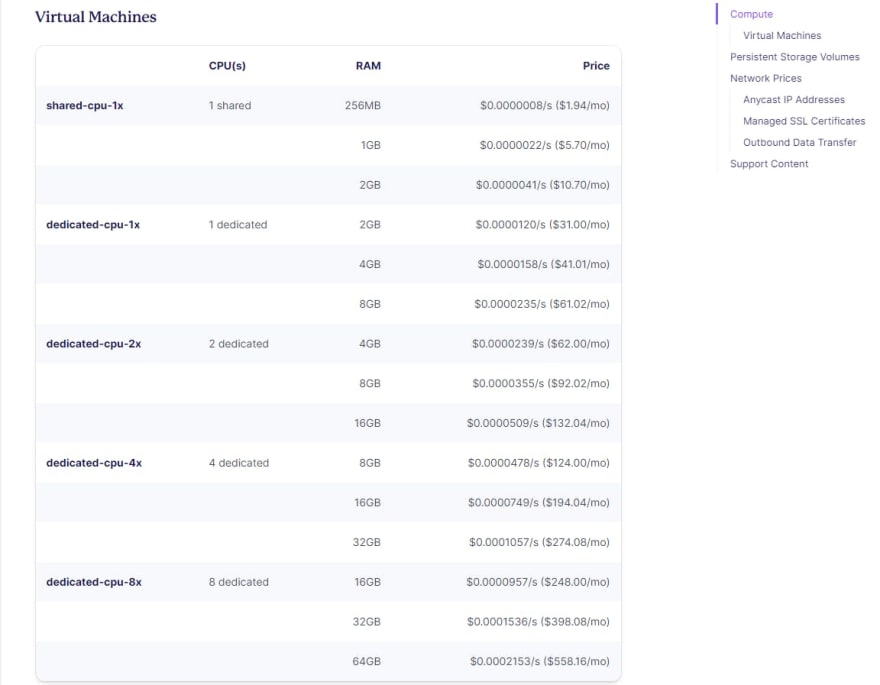 The platform has a generous pricing structure that enables you to run small apps for free (requires a credit card; less feature-rich than Heroku) and scale costs at a reasonable rate as your needs change. Up to 3 shared-CPU-1x 256MB VMs, 160GB of outbound data transfer, and 3GB of storage volumes are available as resources in their base free-tier plan. 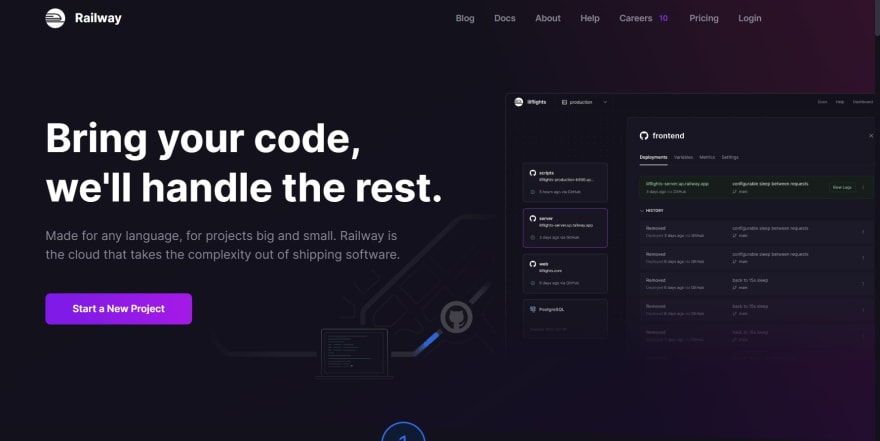 The railway is a cloud infrastructure provider that offers an alternative to Heroku that enables you to develop and instantly deploy your apps to the cloud using their software infrastructure. Railway offers a fair Free Tier and incredibly generous pricing where basic usage is reasonably priced, despite being a more recent and less well-known platform than Heroku.

The free tier of Railway's service includes 512 MB RAM, 1 GB of disc storage, 100 GB of monthly egress traffic, a free SSL certificate, docker/templates, and $5 in monthly credit. Resources are not charged until $10 in usage. Additionally, Redis, MySQL, and Postgres databases are supported by the platform. 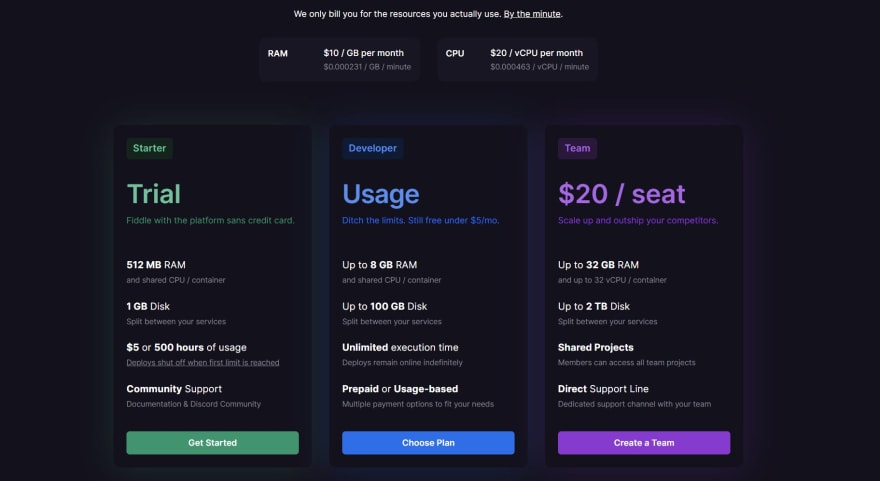 It's interesting to note that Railway enables you to launch without a credit card and that all configuration must be completed via its slick and user-friendly web UI dashboard. However, since the dashboard isn't particularly sophisticated but does the job, this may restrict advanced users. The dashboard on Heroku's paid tier allows you to view CPU, memory, and network metrics on your database usage. Additionally, the dashboard's web form allows you to directly view and create SQL queries. 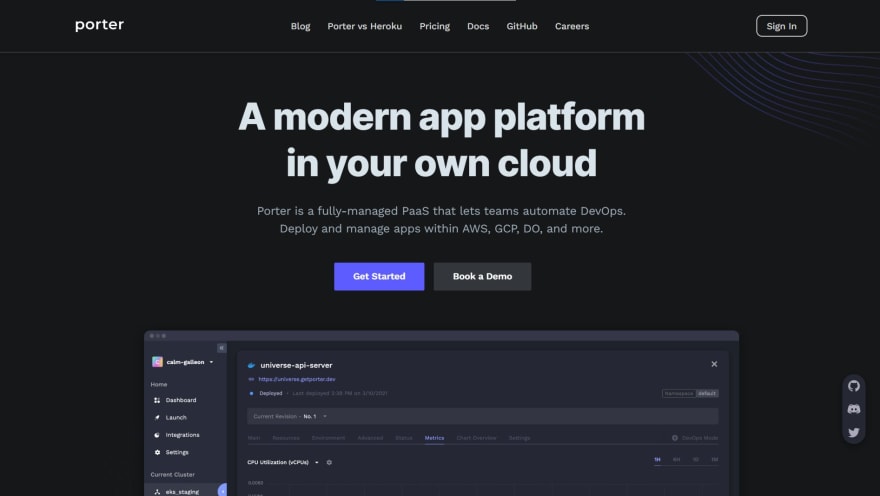 Portal is an Open-Source PaaS that is fully managed and enables teams to deploy and manage applications on AWS, GCP, DO, and other platforms. They provide a self-hosted option as well as a managed cloud solution, giving you complete control over your backend. If you prefer to manage your own infrastructure rather than hosting on PaaS platforms, Portal is a great choice. Porter stands out from the other Heroku alternate solutions due to this characteristic. 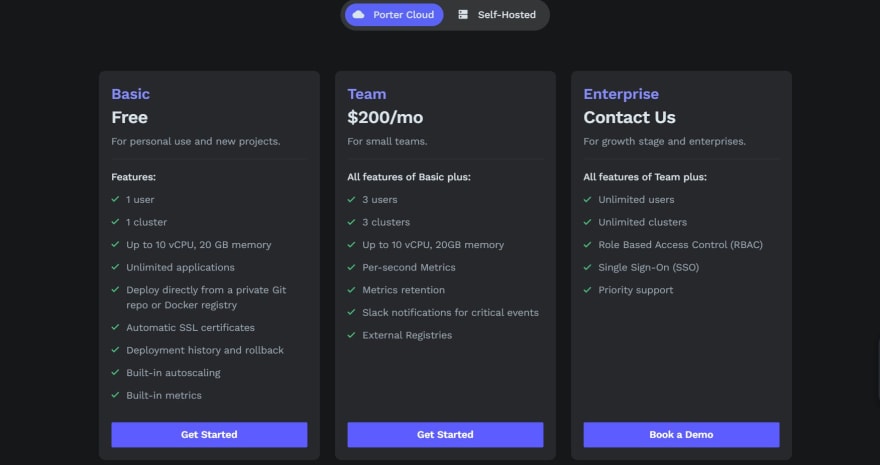 Both its cloud hosting and self-hosted services on the platform come with generous Free Tier plans. The free cloud hosting plan accommodates 1 user and 1 cluster. Direct deployment from a personal Git repository or Docker registry, up to 10 vCPU, 20 GB of memory, unlimited applications, automatic SSL certificates, deployment history, and rollback capabilities. One user, unlimited clusters, and an unlimited number of applications and add-ons are also supported by the Self-hosted Free Plan. Additionally, they make Heroku migration simple because Porter can run anything that can run on Heroku.

An affordable developer platform called Northflank gives programmers the ability to create and scale microservices, cron jobs, and manage databases. All of this is accomplished using a delightful UI, extensive API, and clear CLI, whose usability rivals Heroku's.

Regardless of your language or framework, you can build, deploy, and host any code on Northflank using a Dockerfile. The platform supports all widely used programming languages, frameworks, and technologies, including Laravel, Docker, Node.js, Express, Next.js, Python, Django, Java, MongoDB, MySQL, Cron jobs, and more. 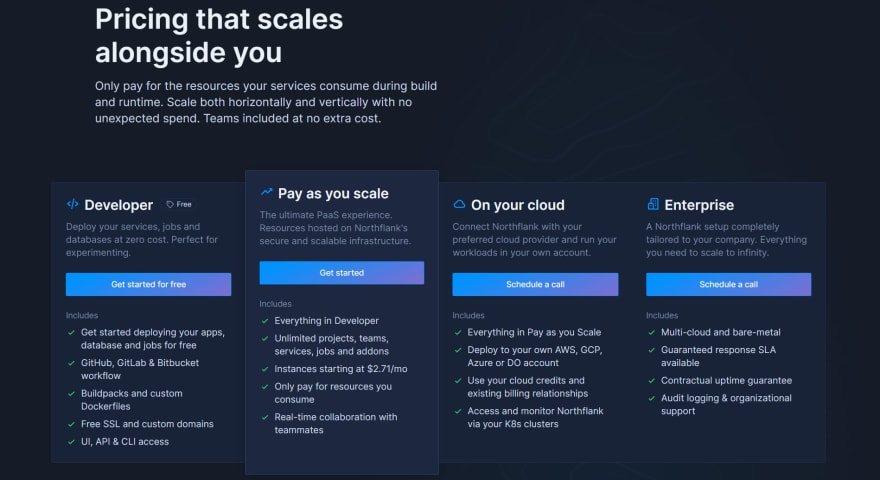 The service uses a pay-as-you-go pricing structure based on consumption. Everything else is provided as standard features, and you only pay for the build and deployment resources you use. You get two services, two cron jobs, one database, a free SSL, and custom domains with its Free Tier plan. You can find information about the migration process from Heroku to Northflank in this documentation.

With up to 2GB of RAM per service and an additional $5 in free monthly credit, the company offers a tiered plan that is permanently free (without requiring any credit card). High-performance edge networks, built-in autoscaling, infrastructure auto-healing, service mesh & discovery, automatic OS patching, and a pay-per-use by the second pricing modal are some of the standard features.

This guide explains how to quickly migrate your Heroku apps to Koyeb and deploy them there. 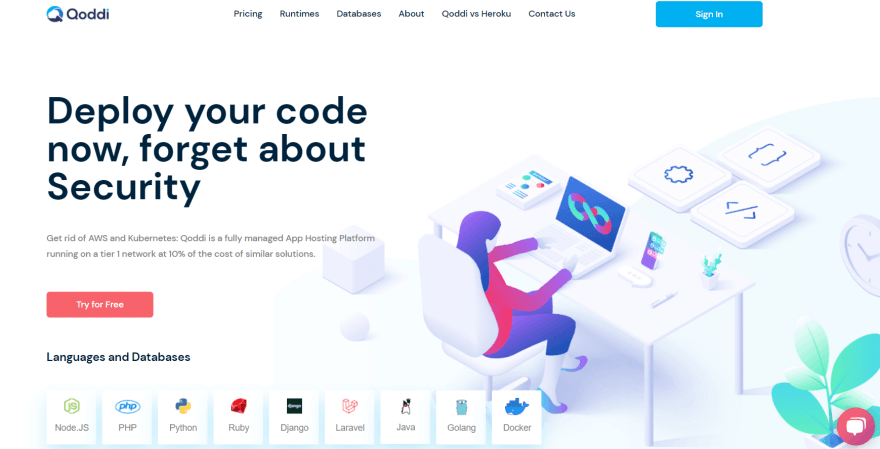 Qoddi.com is a fully managed PaaS hosting platform operating on a Tier 1 network that was created for business and is free for developers. It costs 10% less than comparable solutions. Qoddi clones your code from git, build it with strong sets of builders and deploys it for you instead of building and deploying your application to a server. Additionally, it manages all of your servers, networks, load balancers, security, and updates.

Node is one of the languages and frameworks that Qoddi supports. Docker, MySQL, MongoDB, Redis, Postgres, PHP, Django, Ruby, etc. Additionally, it functions with all Git clients, such as GitHub, Bitbucket, and GitLab. They have three free apps, unlimited traffic, and never sleeps (always on) with their free-forever plan, but there are no custom domains. 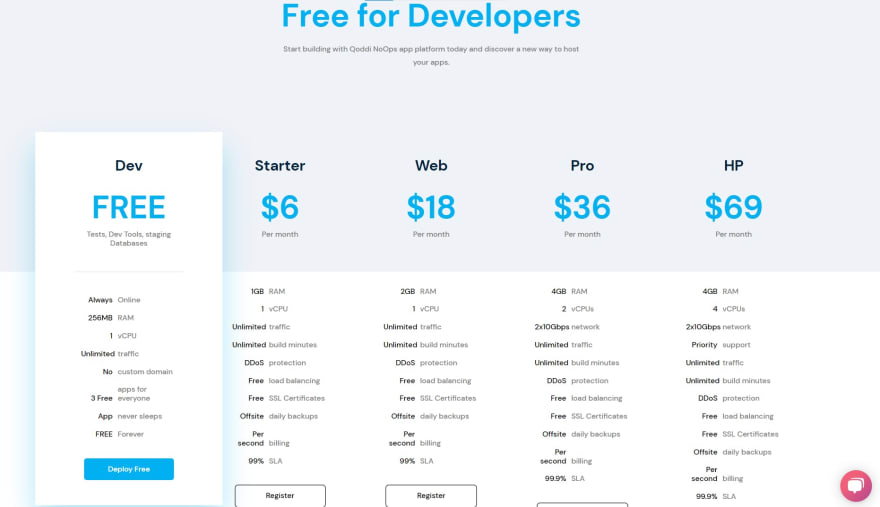 Using this guide, you can learn how to switch from Heroku to Qoddi.

In addition to those that are listed here, there are numerous other Heroku alternatives available. There are plenty of options, whether they are large or small, proprietary or open source. These appear to be the most convincing solutions for Heroku, though. They are excellent alternatives because they include Free Tier plans and provide the majority of the features that Heroku offers.

If these don't quite fit your needs, you can also take a look at this great Github PaaS or Free for Devs list.

Scaling Your Compute Resources on Salesforce

Advent of Code (in MiniScript), Day 5

Once suspended, jainilprajapati will not be able to comment or publish posts until their suspension is removed.

Once unsuspended, jainilprajapati will be able to comment and publish posts again.

Once unpublished, all posts by jainilprajapati will become hidden and only accessible to themselves.

If jainilprajapati is not suspended, they can still re-publish their posts from their dashboard.

Once unpublished, this post will become invisible to the public and only accessible to Jainil Prajapati.

Thanks for keeping DEV Community 👩‍💻👨‍💻 safe. Here is what you can do to flag jainilprajapati:

Unflagging jainilprajapati will restore default visibility to their posts.