In this post I will be going over Object-Oriented Programming (OOP) and object-orientation in Ruby. If Ruby is your first OOP you may have come across this concept and perhaps found it a little tricky, well you're not alone! We'll go over what object-oriented programming is and its application in the Ruby language.

What is Object-Oriented Programming?

In other words, the underlying concept of OOP is that everything is an object. Objects, as we know, contain data in the form of attributes (also known as properties) and functions that run some code (also known as methods). The most common form of OOP is class-based. In class-based OOP, objects are defined via classes, which act as an abstract, reusable template (or blueprint) for instances (objects) of that class. For example, an object(aka instance) named bob could belong to a class named Person, or an object named dog could belong to a class named Animal, and so on. A class can also define the names of attributes and/or methods an instance of said class should have, the instance will then inherit the attributes and methods of the parent class when it's created. 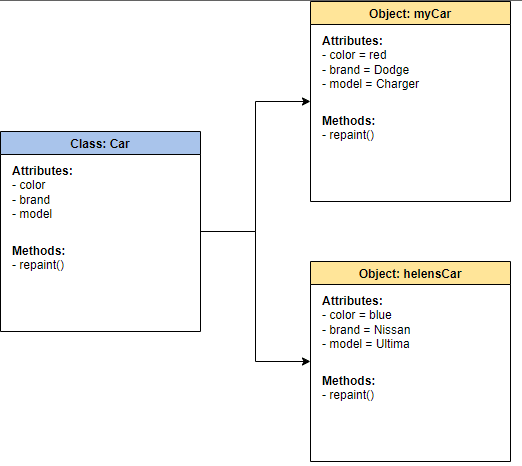 In the above example, there is a class (Car) that contains attributes representing the color, brand, and model of a Car object. We can then instantiate 2 objects from the class Car (myCar and helensCar) that will inherit the attributes and methods of its parent class (Car).

Here's an example of what this looks like in Ruby:

An object is instantiated by calling the .new method on a class followed by the arguments that will become the instance variables (attributes) of that instance. Any methods declared in the parent class will automatically be inherited. In order to create an object with the instance variables of the parent class, a special method is needed: initialize.

The Initialize method and instance variables/methods.

When instantiating an object, more often than not you will be passing one or more arguments to create instance variables for that object. In order to accomplish this, you will first need to declare a special Ruby method in the parent class, called initialize.

Lets look at that method from the previous example:

If you've come across object-orientation in other languages, such as JavaScript, this is also known as a constructor method. It is a special method that is used for creating and initializing an instance object of a class.

In order to directly access object variables from outside of the class, i.e. to be able to call charger.color and have it return red, we need to implement getter methods. A getter method is simply a method that allows you to read the value of an instance variable.

We defined 3 getter methods named after an instance variable and simply had them return the value of that variable. Pretty straightforward!

If we didn't have a getter method for an instance variable, we would get an error when trying to read the variable:

The trailing = character in a method name (such as color=) designates a method as a setter method, therefore color and color= are two totally separate methods.

Now, we're able to both read variable values as well as change them.

A little factoid: Since = symbolizes a setter method. We can also call our method like charger.color=(blue) and get the same result. Thankfully, thanks to syntax sugar we are able to write it as charger.color = 'blue' for better readability.

Now if you're thinking that having to write getters and setters for every single variable is a lot of work, you thought right. A cornerstone of coding is the DRY principle, and writing repetitive code is not only time consuming but ugly to look at.

Thankfully, Ruby gives us an easy way to set up our getters and setters in one line of code! Enter accessor methods.

There are 3 accessor methods available to make our lives easier:

attr_accessor allows us to create both getters and setters in a single line of code. Let's refactor our code to use this method.

We call attr_accessor and pass in our variable arguments as Symbols. This creates both attr_reader and attr_writer for each variable all in one line.. much better!

Everything is an object

Going back to the concept of everything is an object, does that mean that strings, arrays, numbers, etc are objects too? Yes, they are!

When you create an array or a string, you are creating an object from a built-in Ruby class!!

We can demonstrate this by calling the .class method, which shows us the class the object belongs to.

Arrays, strings, and numbers belong to the Array, String, and Integer classes respectively. These are some of the built-in classes within Ruby with their own methods and variables. Think about when you're using the .capitalize or .reverse method on a string, those are instance methods belonging to the String class!

These are some of the basics of object-oriented programming in Ruby. With this knowledge you're ready for other OOP concepts such as self, class variables, and class methods. Good luck and have fun!

What Types of Services are Offered in Web Development?

Once suspended, jaguilar89 will not be able to comment or publish posts until their suspension is removed.

Once unsuspended, jaguilar89 will be able to comment and publish posts again.

Once unpublished, all posts by jaguilar89 will become hidden and only accessible to themselves.

If jaguilar89 is not suspended, they can still re-publish their posts from their dashboard.

Once unpublished, this post will become invisible to the public and only accessible to Jose Aguilar.

Thanks for keeping DEV Community 👩‍💻👨‍💻 safe. Here is what you can do to flag jaguilar89:

Unflagging jaguilar89 will restore default visibility to their posts.