We are using this terms in our meetings or workshops, Sprint planning and Features discussions. and i noticed that a lot of people don't understand the difference between them so i decide to shade some lights and explain them quickly here.

A proof of concept often involves a small exercise to test the real-world potential of an incomplete idea. This isn’t about delivering the idea, but demonstrating whether it is feasible. It should be used in the early stages when you first have an instinct about an idea. A proof of concept shows if a product, feature or system can be developed.

for example, We had a request from our marketing team where they where using some tool to manually upload some images and videos to some marketing partners (Facebook for example) and their request was to find a way so we automate the process without the need to the user interaction and authentication of the 3rd party. the proof of concept was written code to test the FB Api to allow a user agent code to behave on behalf of the normal user.
we wrote simple code do a couple of test and then proofed that its working and its possible. 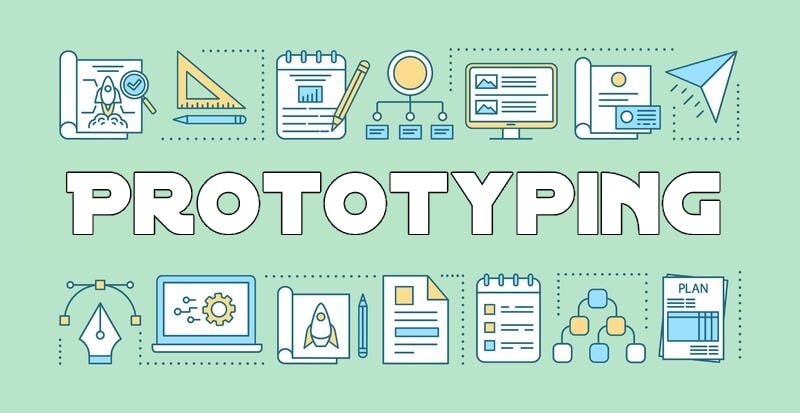 A prototype is the visible, tangible or functional manifestation of an idea, which you test with others and learn from at an early stage of the development process.

for example , We wanted to develop a tool for our marketing department, they were not sure about what they really need, also we didn't want to start developing on un-certin and sold ground, so we decide to give them Prototype where we used simplified UI tool and relay on Browser database(IndexedDB), where we able to give them a version that they can use to verify what they really want.
By doing so , we where able to put every stakeholder involve in this App on the same page and giving him the ability to demonstrate his needs and concerns.

Prototypes should be used when you have a hypothesis about a solution, but there is still uncertainty about how it looks, feels and works. Insights from testing can then be used to improve the idea. By developing and improving the prototype, you can maximise what you learn and refine your idea. This helps you move from a version with little detail or functionality (like a rough draft that illustrates the idea) to a version with much more detail and functionality (giving test-users a better sense of how it works).

Pilots are often used as the first stage of a new policy or service rollout.
Pilots should be used when you believe you have an effective solution and are looking to iron out the creases and understand how it works in reality. By offering a partially implemented concept to a limited segment of users, it is possible to see what actually happens.
This is useful when preparing to scale a solution to a wider group. Pilots, however, are ultimately measured by success or failure, and there is usually only room to make minor tweaks.

An MVP allows you to accelerate your learning about a possible solution whilst using minimal resources. It does this by testing only the essential core of your concept (rather than the full solution) with real users in practice. This means that you can find out early on if there is an actual need or demand for the solution, what is working and what isn’t, and make any adjustments accordingly.

for example, Game development companies do a lot of MVPs where they do tests on specific amount of populations or users. to study and Analysis possible Future products in an early stages.

Proof of concepts and prototypes are usually developed and tested within a controlled environment – such as in a workshop or lab workplace – although some prototypes are tested out in the field. Pilots and MVPs, on the other hand, are usually tested in the real world.

this table show the usages criteria

references and credits goes to this nice Artikel here: https://www.nesta.org.uk/blog/proof-of-concept-prototype-pilot-mvp-whats-in-a-name/

i hope this explanation might help you with your next project.
thanks

How to send large files online ?

Ahmed Zeno
I am a software engineer who is interested in sharing some knowledge ('' ,) i decide that i will will post everyday problem that i am facing in my work. i hope that this will help other people too
🤯 Did you know there are F13-F24 keys? 🤯
#discuss #todayilearned #watercooler
Interview questions for JS
#javascript #career #react #webdev
November 25th, 2021: What did you learn this week?
#weeklylearn #discuss #weeklyretro