I'm a huge fan of VS Code, and I use it for pair programming and occasionally when I want to use one of the awesome extensions that the VS Code community has provided.

However, I'm also a fan of diverse marketplaces. I don't really like the idea that the vast majority of developers I interact with use the same text editor.

I'm the kind of person that uses Ubuntu, Firefox, and DuckDuckGo. Not just because they are great tools (I think I'm having a better time on Ubuntu than the last year I spent on MacOS, honestly), but because I don't like the idea of a single company controlling a market.

For that reason, I wanted to start a conversation about alternatives to VS Code.

I use Spacemacs, which is a set of Emacs configurations that essentially combine the Emacs and Vim text editors. I really like that I don't have to do much tweaking out of the box, but I still have a lot of the power found in both Vim and Emacs. 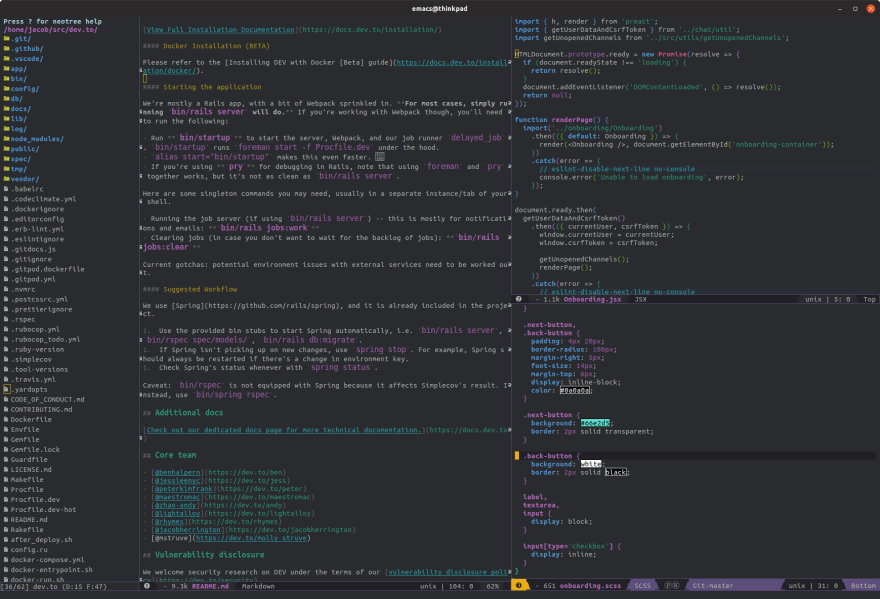 What alternatives do you use? Or, if you don't what about VS Code keeps you from using something else?

The “essential” ingredient to become a good developer

Once suspended, jacobherrington will not be able to comment or publish posts until their suspension is removed.

Once unsuspended, jacobherrington will be able to comment and publish posts again.

Once unpublished, all posts by jacobherrington will become hidden and only accessible to themselves.

If jacobherrington is not suspended, they can still re-publish their posts from their dashboard.

Once unpublished, this post will become invisible to the public and only accessible to Jacob Herrington (he/him).

Thanks for keeping DEV Community 👩‍💻👨‍💻 safe. Here is what you can do to flag jacobherrington:

Unflagging jacobherrington will restore default visibility to their posts.