In this tutorial we are going to setup a complete remote work environment with the ability to sync our workspace directory across multiple devices using nextcloud and code-server as web editor.

We can use this work environment if we need to use a powerful computer using a cloud server or just to keep our environment from anywhere at any time on the internet.

In this tutorial you need to have the following components

This is the system architecture used in this tutorial 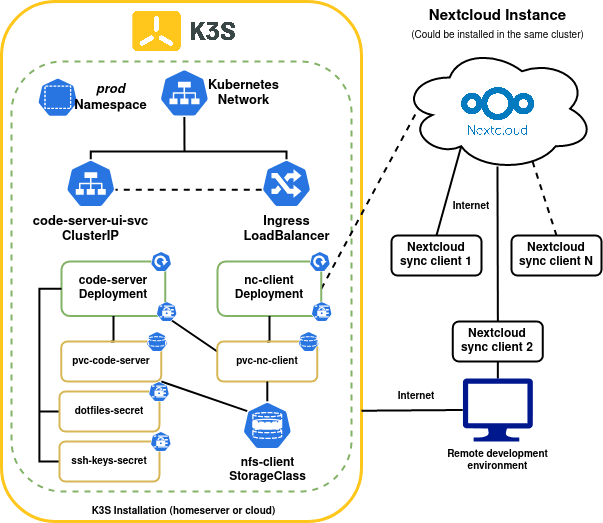 We are going to use a kubernetes storage class to save our files and share between code-server and nc-client deployments.

In order to sync all out files across multiple devices we are going to use nextcloud as sync system, in this tutorial we used the nextcloudcmd command to sync our files using a docker container.

The docker used syncs the nextcloud remote directory every X seconds, you need to set the NC_USER, NC_PASS and NC_HOST in the k8s/conf/nextcloud-client-conf.yaml file, the NC_PASS is a secret file, so you'll need to encode as base64 (example: echo -n 'verysecretpass' | base64).

Create the environment variables for the nc-client container

Configure vscode on the server

In this tutorial we are using the linuxserver/code-server which includes the web version of visual studio code (oss version) and is highly customizable due to s6-overlay system. This docker image allow us to extend the capabilities of the base image using docker mods.

If you want to setup your own docker mod I highly recommend to check the docker-mods documentation for more info.

In this tutorial I'm using my own docker mod, this docker mod install the required packages such as psql, awscli, python, kubectl, helm, zsh, etc. This docker mod also bootstrap the config files such a gitconfig, aws credentials, zshrc file, ssh keys, kube config file, etc. This files are mounted in the code-server pod then the bootstrap scrip will copy these files in her location with the correct owner and permissions.

We are using the linuxserver/mods:code-server-extension-arguments to install the required vscode extensions in the code-server pod. The docker mods can be set in the DOCKE_MODS variable separated by |. Check the list of official mods for code-server

Configure the code-server values such the user and sudo password, the docker mods and the config files.

Create the code-server deployment, you can modify the resource request and limits according to your available compute resources

In this step we are going to setup the ingress in order to access to our code-server installation through a FQDN domain with TLS endpoint.

NOTE: Make sure you have pointed your domain to your k8s cluster and configured your firewall to access to your installation.

When you finished the setup you'll have a remote environment with your files synchronized in a remote server with nextcloud just like this: 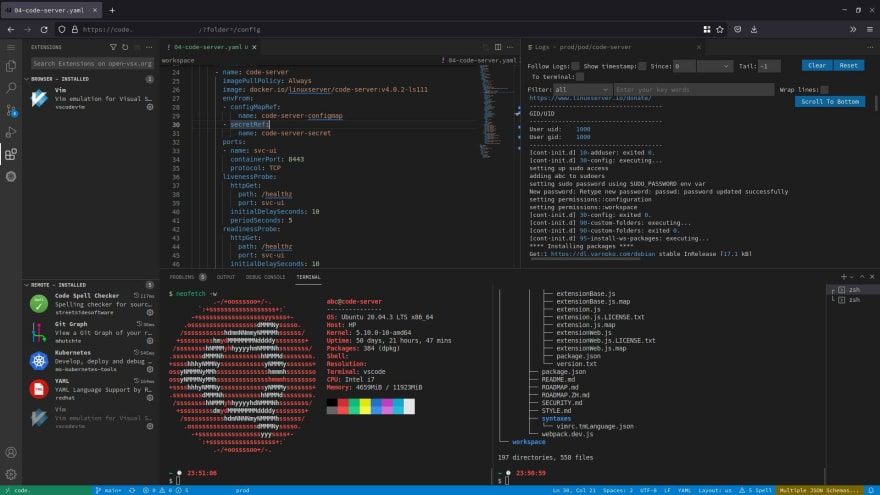 Now you can edit, test and build your projects in your browser from anywhere at anytime, you only need a stable internet connection and a web browser.

Python: The Difference Between Sets, Lists, Dictionaries and Tuples

Once suspended, ivanmoreno will not be able to comment or publish posts until their suspension is removed.

Once unsuspended, ivanmoreno will be able to comment and publish posts again.

Once unpublished, all posts by ivanmoreno will become hidden and only accessible to themselves.

If ivanmoreno is not suspended, they can still re-publish their posts from their dashboard.

Once unpublished, this post will become invisible to the public and only accessible to Ivan Moreno.

Thanks for keeping DEV Community 👩‍💻👨‍💻 safe. Here is what you can do to flag ivanmoreno:

Unflagging ivanmoreno will restore default visibility to their posts.