Coinbase Pro is a pretty easy to use crypto exchange. Although it doesn’t allow trading of the entire crypto universe, it does allow users to deposit and trade with fiat currencies. One feature that’s missing, but pretty easy to implement, is automatic deposits.

This tutorial will walk you through using Python to initiate deposits on a periodic basis. I know what you're thinking, "Making automatic deposits does not constitute having a trading bot". Future tutorials will build on this one to complete out all of the bot features. Stay tuned!

Want to skip to the end? Here's the repo with this tutorial's code.

To get started, make sure you have a production account with Coinbase Pro and an account on the Coinbase Pro Sandbox (this is used for testing). For both accounts, create API credentials 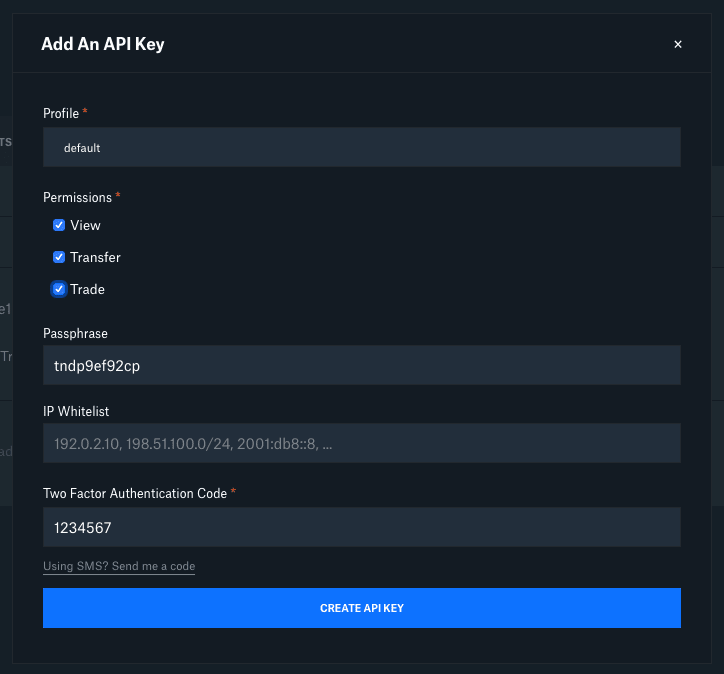 When you're done, you should have the following for both your production and sandbox accounts:

Next, create a file with the following
Filename: app.py

This code create a basic Flask app with a single endpoint. Let's test it out. In your terminal write

. This runs the Flask app on your local computer. In your terminal, you should see a line that says something like "Running on http://###.#.#.#:###/". If you go to this URL in your browser, you should see "message: Hello World"

Alright, now that the app is set up, let's deploy it to Heroku.

Usually, tutorials walk you through the entire process before showing you how to deploy it. I'm going to go through the deployment step now because Heroku allows for automatic deployments when code is pushed to a branch. Also, from this point on, we'll need to utilize secure information like secrets and passphrases. Using Heroku's environment configuration is way easier than adding all of the keys to my computer's bash_profile, and doing so makes sure you don't mix keys in different projects.

If you haven't already, create an account on Heroku. Then, install the Heroku CLI to your computer and go through the set up process. Afterwords, create an app and head over to the Deploy page to connect it to the repository where you're pushing your code.

Before we can check out our app, we have to serve it. We'll do so using Gunicorn. Run the following in your terminal (make sure your virtualenv is still running).

Then, add the following file.
Filename: Procfile
(warning, there's no extension to this file name)

Now commit your changes, wait about a minute, and then head over to your site! You can find your domain on the "Settings" page in the "Domain and certificates" section.

Now that that's set up, let's connect the app to Coinbase Pro.

Let's create an environment file so that we can deploy the app locally for testing.

If you're uploading your code to a public repo, make sure to add .env to your .gitignore file.

Because I already know that I'll be adding multiple functions (modules) that will need to connect to my Coinbase Pro account (making deposits, placing trades, viewing balances, etc.), I'm going to create a decorator function that will pass my Coinbase authenticated client to any necessary functions. Don't worry, I actually JUST learned about decorator functions. So if this part doesn't make sense to you, don't worry. Decorators don't make sense to most of us.

Next up, we're making a deposit!

Alright, this is the moment we've all been waiting for.

Let's unpack. The first function retrieves the bank account id for the account used to make the deposit. This function assumes that there's only one ACH account. So, if you have multiple ach accounts connected to your Coinbase account, feel free to customize how the account is selected. The second function uses the returned bank account to make a deposit.

*Random: I'm still trying to figure out my docstring style. If anyone has any tips or suggestions, feel free to share!

Now, let's add this function to our app so that we can test it out! In your app.py file, add the following to the top

Normally, this is where I would say, "To test it out, run the following in your terminal and then head to the deposit endpoint (http://0.0.0.0:####/deposit)"

However, this would produce an error because Coinbase doesn't let you deposit funds via API in sandbox mode. So unfortunately, this won't work. However, when you switch over to your real Coinbase credentials, it will be good to go! If you don't believe me (it's okay, we just met), then import the get_deposit_account function instead and use that function for the deposit endpoint. After running your app locally, you should see a JSON object of your deposit account in the browser. Don't forget to switch back to the deposit_funds function.

Now I don't know about you, but I think it would be pretty nice to see the output of each step within the code so I can make sure everything is up and running correctly. Next, we'll add some logging.

*Feel free to skip this step if logging isn't your flavor

Logging is an AWESOME tool to help you see what's going on in your code (no more print statements!). Because I want to be extra fancy, we'll publish log files to AWS S3 buckets so that we can view them easily.

Here's a tutorial on creating an IAM user on AWS. Also, here's how you create a bucket on AWS S3. Create a bucket and write down the name (e.g. crypto_bot_logs)

Thirdly, grab your credentials in your config file by adding the following to the end
Filename: config.py

Fourthly (is fourthly even a word?), create your logger file
Filename: logger.py

Here's what each function does:

Now, we can add some logging statements to our functions. Here's what I added, but feel free to customize based on what you want to see. Here's an awesome tutorial on logging.

Here's how my deposit_funds function looks now. Don't forget to import logger at the top

If you run your app now (heroku local) and head to the '/deposits' endpoint, you'll see the same error you saw in the previous section. However, if you head to your S3 bucket, open the folder with today's date, and open the file named "deposit_funds_[todays_date].log", you should see something like this.

Yay! Now we can see where in the function the error is coming from. When you deploy the app to Heroku and use your production credentials, the log message will show you the response for making the deposit.

That's (almost) it! Commit your changes and push to your repo so it can make its way to Heroku.

Remember how we created a .env file so that we could read environment variables when using heroku local? Well, now that it's game time, it's time to add our real credentials to our Heroku app. On your app's Settings page in Heroku, click on "Reveal Config Vars" and add the following key value pairs.

Now, when your app runs, it will use these credentials.

If you've made it this far, congrats! You now have an app that makes a deposit of $10 whenever you go to http://your_domain_url.com/deposit. But what if you want the app to do it automatically? Next, I'll show you how to make some slight changes so that the deposit_funds function runs on a schedule.

Alright, one more package to install. In your terminal run the following:

This file creates a command that we can call from Heroku.

Then from the Resources tab on your Heroku dashboard, search for Heroku Scheduler and add it to your app. Note: Heroku might ask you to add payment information to your account. Click on "Heroku Scheduler" and then "Create job". I want my function to run every Thursday. Here's how my job looks 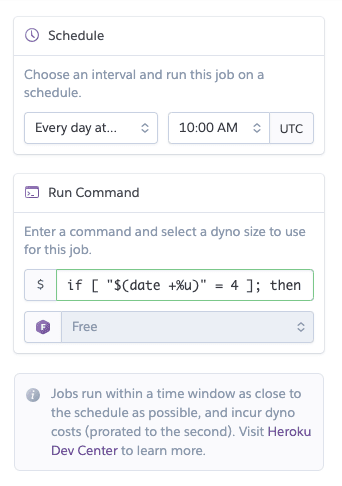 Click "Save Job" to lock it in. You're done! You now have an app that will make automatic deposits to your Coinbase Pro account and log activities to a S3 bucket!

Another alternative is to create an AWS Lambda function and that gets called via AWS Cloudwatch. If you're interested in seeing how to do it this way, let me know!

How to encrypt/decrypt with AES-GCM using CryptoKit in Swift

How to unzip multiple zip files in a folder using python?

Taylor Facen
I build bots, launch data pipelines, and anything else Python allows me to do.
How I Used Twilio Autopilot to Build an Interview Coach
#twilio #autopilot #python
How to Safely Add Environment Variables to your Python App
#python
Athena, Can I get a Wake Up Call?
#python #twilio #flask