Styling with CSS is a pain and that’s the truth of the matter. Most developers find it hard to use the box model and center divs and even after trying and learning how to center divs, you then get the shocker that not every browser is compatible with your styling and you have to add extra lines of code to provide compatibility for other browsers.
Well, worry no more. Sass takes care of compatibility issues of browsers by being compatible across different browsers and also new versions of Sass are backward-compatible meaning that older Sass syntax or lines of Sass code can still work without modifications. And if you want to have fun while writing CSS code then I can think of no better way than to learn SASS

Without further ado, let's get into it.

SASS supports two different syntaxes which can load up each other and they are Indented Syntax which is the original SASS syntax and SCSS.

What is Indented Syntax or SASS?

SASS is short for Syntactically Awesome Style Sheet. I know, I know, syntactically sounds like a lot no? Well, what it means is that the lines( syntax ) of SASS code are so awesome that it is known as CSS with superpowers.
SASS is known as a CSS preprocessor meaning that it lets you create and write code that is then compiled into CSS. SASS uses the file extension .sass
SASS code has a loose syntax with no semicolons, it is preferred for those that want to be concise as possible when writing CSS code. An example of SASS code is given below:

SCSS is short for Sassy Cascading Style Sheets. SCSS uses the file extension .scss and it's a superset of CSS which means that all valid codes of CSS are also valid codes of SCSS. Based on its closeness and similarities with CSS, it is the easiest syntax to get used to and also to write which makes it the most popular between the two syntaxes. SCSS is preferred by those that prefer similarities when writing CSS code. An example of SCSS code is given below:

Compiler for SASS and SCSS

One of the disadvantages of SCSS and SASS is the fact that browsers cannot read SCSS and SASS code. Therefore for your SCSS code to work, you have to install a compiler in whichever code editor you are using. The code editor will then take that written SCSS code and then interpret it into CSS which can then be understood by browsers. I use Visual Studio Code editor which is a free code editor by Microsoft and which supports extensions. I use Live Sass Compiler which is shown in the image below: 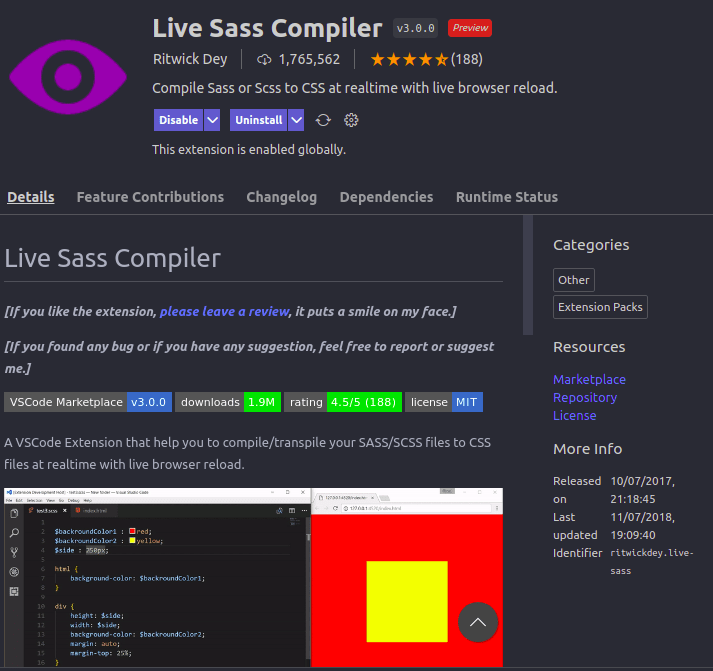 Now after you have installed the extension, you will see the Watch Sass icon below meaning that it is watching and compiling every SASS code to CSS.

We can then use those variables anywhere in our code like so:

To include our mixin in any part of our code:

In this article, we introduced and talked about SASS, its benefits, and why you should start using it instead of the conventional CSS. You can visit here to learn more about SASS.

Shipping a new open source project? Have you thought about release naming?

What is Application design?

Is React.js the best choice for beginners?

IsaacThaJunior
Developer and all round cool guy
The this Keyword in Javascript
#javascript #webdev #beginners #programming
A dive into ABAC systems in Node.js applications with Fauna
#webdev #programming #fauna #node