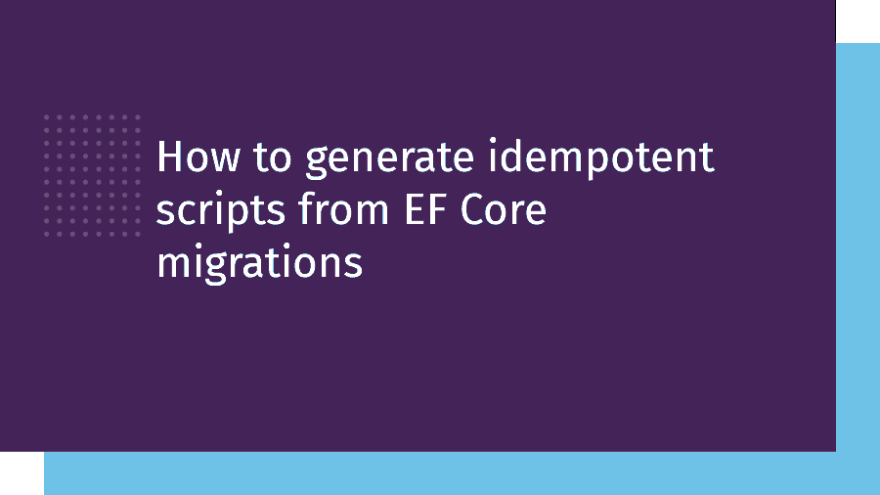 Is it possible to generate idempotent scripts from EF Core migrations? Automatically? Yes, it is! But first, let’s see what idempotency means.

What is an idempotent script?

Generally speaking, an idempotent script, no matter if it is written in PowerShell, bash or SQL on any other scripting language, will give you the luxury to run it over and over again, without the fear of breaking something. More than that, any script that might fall under unsupervised hands/system should have some ‘safety’ measures built-in.

Now, we know from HTTP concepts that GET and HEAD requests are idempotent and safe. But POST requests aren’t neither safe nor idempotent.

The question is why? Well, first of all, by sending a POST request you end up creating new resources, and if you don’t have a business rule to prevent requests with the same request body, you’ll just have a lot of duplicates and nothing stopping you from creating them.

Why can’t we apply the same rules when writing database scripts?

You must write it in such a way that you check at least the most likely scenarios.

So on and so forth, but you get the point. You need to cover all the scenarios that can end up corrupting your database.

There are several options to manage your database scripts. With so many third-party or out-of-the-box tools, sometimes is difficult to even choose.

A few years back I remember using PostgreSQL as a database for a project, and I really enjoyed the syntax. We used to manually make idempotent scripts, tested them locally, then added them to a different repository and shipped them to production with Flyway.

No matter the script you are running you can always add the--verbose flag to see what is executed with that script.

Real-life example: generating a script that adds Addresses to Person

As you can see, this script relies heavily on the __EFMigrationsHistory table, which is not exactly very…idempotent. So, my recommendation is to have another look at the generated scripts and customize and test them.

The post How to generate idempotent scripts from EF Core migrations appeared first on Irina Scurtu.

Setting up JWT and Identity Authorization/Authentication in ASP .NET Core

How to enable dotnet watch in Jetbrains Raider

How to get the actual table name from DbSet in EntityFramework Core 2.0.