In addition, Cascade Lake based servers with DCPMM provide an excellent update path for those looking into refreshing older hardware and improving performance and scaling. InterSystems technology architects are available to help with those discussions and provide advice on suggested configurations for your existing workloads.

We ran several workloads with varying global buffer sizes to show the impact and performance gain of larger caching. For each configuration iteration we ran a COLD, and a WARM run. COLD is where the database cache was not pre-populated with any data. WARM is where the database cache has already been active and populated with data (or at least as much as it could) to reduce physical reads from disk.

We compared an older 4-Socket E7v4 (aka Broadwell) host to a 4-socket Cascade Lake server with DCPMM. This comparison was chosen because it would demonstrate performance gains for existing customers looking for a hardware refresh along with using InterSystems IRIS. In all tests, the same version of InterSystems IRIS was used so that any software optimizations between versions were not a factor.

There is a significant reduction in elapsed runtime (approximately 6x) when comparing 512GiB to either 1TiB and 2TiB DCPMM buffer pool sizes. In addition, it was observed that in comparing 2TiB E7v4 DRAM and 2TiB Cascade Lake DCPMM configurations there was a ~20% improvement as well. This 20% gain is believed to be mostly attributed to the new processor architecture and more processor cores given that the buffer pool sizes are the same. However, this is still significant in that in the 4-socket Cascade Lake tested only had 24 x 128GiB DCPMM installed, and can scale to 12TiB DCPMM, which is about 4x the memory of what E7v4 can support in the same 4-socket server footprint.

The following graphs in figure-2 depict the comparison results. In both graphs, the y axis is elapsed time (lower number is better) comparing the results from the various configurations. 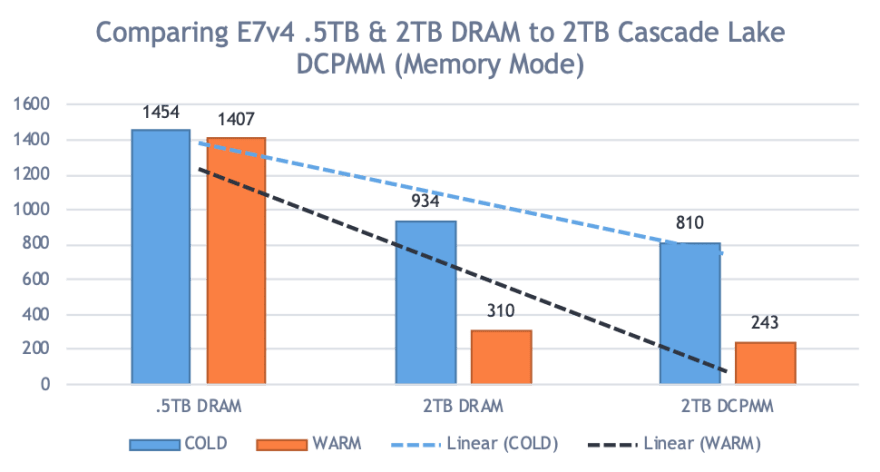 The workload in this benchmark was our HL7v2 messaging workload using all T4 type workloads.

Each system is configured with 128 inbound Business Services and 4800 messages sent to each inbound interface for a total of 614,400 inbound messages and 2,457,600 outbound messages.

The measurement of throughput in this benchmark workload is “messages per second”. We are also interested in (and recorded) the journal writes during the benchmark runs because transaction journal throughput and latency are critical components in sustaining high throughput. This directly influences the performance of message durability guarantees of IRIS for Health, and the transaction journal write performance is crucial in that operation. When journal throughput suffers, application processes will block on journal buffer availability.

For the write-intensive workload, we decided to use a 2-socket server. This is a smaller configuration than our previous 4-socket configuration in that it only had 192GB of DRAM and 1.5TiB of DCPMM. We compared the workload of Cascade Lake with DCPMM to that of the previous 1st Generation Intel® Xeon® Scalable Processors (Skylake) server. Both servers have locally attached 750GiB Intel® Optane™ SSD DC P4800X drives.

Test-1: This test ran the T4 workload described above on the Skylake server detailed as Server #1 Configuration in Figure-3. The Skylake server provided a sustained throughput of ~3355 inbound messages a second with a journal file write rate of 2010 journal writes/second.

Test-2: This test ran the same workload on the Cascade Lake server detailed as Server #2 Configuration in Figure-3, and specifically with DCPMM in Memory Mode. This demonstrated a significant improvement of sustained throughput of ~4684 inbound messages per second with a journal file write rate of 2400 journal writes/second. This provided a 39% increase compared to Test-1.

Test-3: This test ran the same workload on the Cascade Lake server detailed as Server #2 Configuration in Figure-3, this time using DCPMM in App Direct Mode but not actually configuring DCPMM to do anything. The purpose of this was to gauge just what the performance and throughput would be comparing Cascade Lake with DRAM only to Cascade Lake with DCPMM + DRAM. Results we not surprising in that there was a gain in throughput without DCPMM being used, albeit a relatively small one. This demonstrated an improvement of sustained throughput of ~4845 inbound message a second with a journal file write rate of 2540 journal writes/second. This is expected behavior because DCPMM has a higher latency compared to DRAM, and with the massive influx of updates there is a penalty to performance. Another way of looking at it there is <5% reduction in write ingestion workload when using DCPMM in Memory Mode on the same exact server. Additionally, when comparing Skylake to Cascade Lake (DRAM only) **this provided a 44% increase compared to the Skylake server in Test-1.**

Test-4: This test ran the same workload on the Cascade Lake server detailed as Server #2 configuration in Figure-3, this time using DCPMM in App Direct Mode and using App Direct Mode as DAX XFS mounted for the journal file system. This yielded even more throughput of 5399 inbound messages per second with a journal file write rate of 2630/sec. This demonstrated that DCPMM in App Direct mode for this type of workload is the better use of DCPMM. Comparing these results to the initial Skylake configuration there was a 60% increase in throughput compared to the Skylake server in Test-1.

There are several use cases and configurations for which InterSystems IRIS will benefit from using Intel® Optane™ DC Persistent Memory.

This is ideal for massive database caches for either a single InterSystems IRIS deployment or a large InterSystems IRIS sharded cluster where you want to have much more (or all!) of your database cached into memory. You will want to adhere to a maximum of 8:1 ratio of DCPMM to DRAM as this is important for the “hot memory” to stay in DRAM acting as an L4 cache layer. This is especially important for some shared internal IRIS memory structures such as seize resources and other memory cache lines. 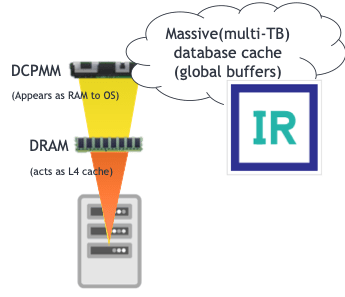 This is ideal for using DCPMM as a disk device for transaction journal files. DCPMM appears to the operating system as a mounted XFS file system to Linux. The benefit of using DAX XFS is this alleviates the PCIe bus overhead and direct memory access from the file system. As demonstrated in the HL7v2 benchmark results, the write latency benefits significantly increased the HL7 messaging throughput. Additionally, the storage is persistent and durable on reboots and power cycles just like a traditional disk device. 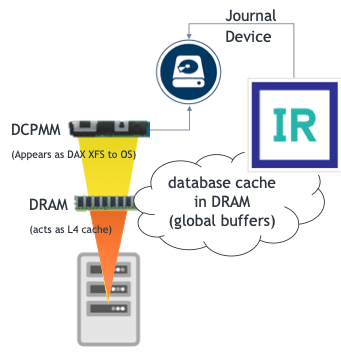 In this use case, this extends the use of App Direct mode to both the transaction journals and the write image journal (WIJ). Both of these files are write-intensive and will certainly benefit from ultra-low latency and persistence. 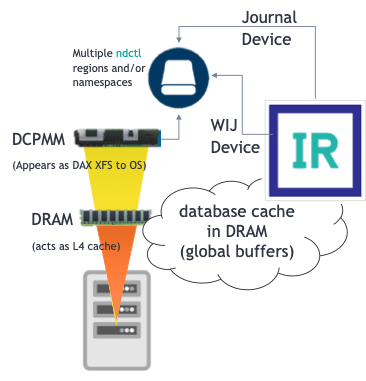 When using DCPMM in dual mode, the benefits of DCPMM are extended to allow for both massive database caches and ultra-low latency for the transaction journals and/or write image journal devices. In this use case, DCPMM appears both as mounted XFS filesystem to the OS and RAM to operating systems. This is achieved by allocating a percentage of DCPMM as DAX XFS and the remaining is allocated in memory mode. As mentioned previously, the DRAM installed will operate as an L4 like cache to the processors. 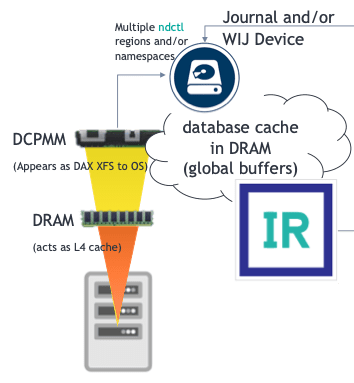 To extend the use case models on a bit of slant with a Quasi Dual Mode in that you have a concurrent transaction and analytic workloads (also known as HTAP workloads) type workload where there is a high rate of inbound transactions/updates for OLTP type workloads, and also an analytical or massive querying need, then having each InterSystems IRIS node type within an InterSystems IRIS sharded cluster operating with different modes for DCPMM.

In this example there is the addition of InterSystems IRIS compute nodes which will handle the massive querying/analytics workload running with DCPMM Memory Mode so that they benefit from massive database cache in the global buffers, and the data nodes either running in Dual mode or App Direct the DAX XFS for the transactional workloads.

Benefits of InterSystems IRIS and Intel DCPMM capable servers include:

InterSystems Technology Architects are available to discuss hardware architectures ideal for your InterSystems IRIS based application.

Saving data to Supabase and getting it back again