In this series of articles, I'd like to present and discuss several possible approaches toward software development with InterSystems technologies and GitLab. I will cover such topics as:

GitLab Workflow takes into account the GitLab Flow, which we discussed in a previous article. Here's how it looks like:

Again, the process itself is not new (or unique to GitLab for that matter) and can be achieved with other tools of choice.

Let's discuss several of these stages and what they entail. There is also documentation available.

The beginning stages of GitLab workflow are centered on an issue - a feature or a bug or some other kind of semantically separate piece of work.

The issue has several purposes such as:

Planning stage allows us to group issues by their priority, milestone, kanban board and have an overview for that.

Development was discussed in the previous part, just follow any git flow you wish. After we developed our new feature and merged it into master - what happens next?

Continuous Delivery is a software engineering approach in which teams produce software in short cycles, ensuring that the software can be reliably released at any time. It aims at building, testing, and releasing software faster and more frequently. The approach helps reduce the cost, time, and risk of delivering changes by allowing for more incremental updates to applications in production. A straightforward and repeatable deployment process is important for continuous delivery.

In GitLab continuous delivery configuration is defined on a per-repository basis as a YAML config file.

Script defines one action and what conditions should be met to execute it:

Environment - is a configured server or container in which you can run your scripts.

Runner can be deployed on a server, a container or even your local machine.

How does Continuous Delivery happen?

For example, here's one pipeline executed after a commit to a master branch:

As we can see, each script has run successfully, if one of the scripts failed by default later scripts would not be run (but we can change this behavior):

If we open the script we can see the log and determine why it failed:

In the next article, we'll:

Let's discuss how our Continuous Delivery should work.

First of all, we need several environments and branches that correspond to them. Code goes into this branch and delivered to the target environment:

Or the same but in a graphic form: 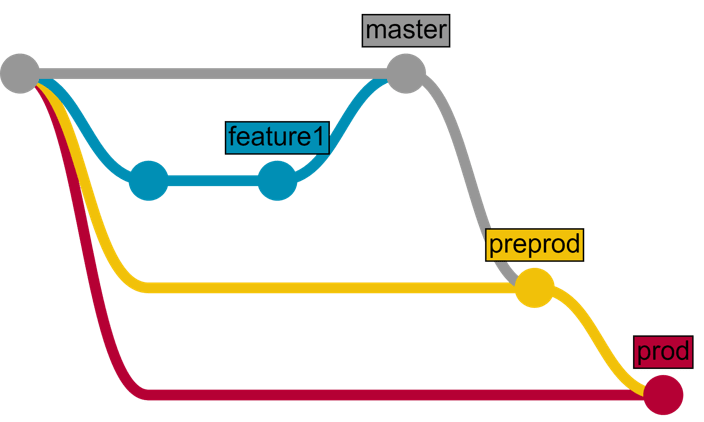 Getting Started with Nodejs, Express and Docker

A Window into Docker, minikube, and containerd