Most of the server-side languages, like PHP, ASP.NET, Ruby, JAVA servers, follow multi-threaded architecture. That means, every request by the client results in the instantiation of a new thread or even a process.

However, in Node.js, all requests are handled in a single thread with shared resources. Then how does Node.js handle concurrent traffic or requests? It follows “Single Threaded Event Loop Model” architecture that runs on top of a single V8 engine instance.

Node.js is event-driven that implements background workers to achieve non-blocking asynchronous behavior. We called it the Observer Pattern. Node thread keeps an event loop and whenever a task gets completed, it fires the corresponding event which signals the event-listener function to execute as illustrated below. 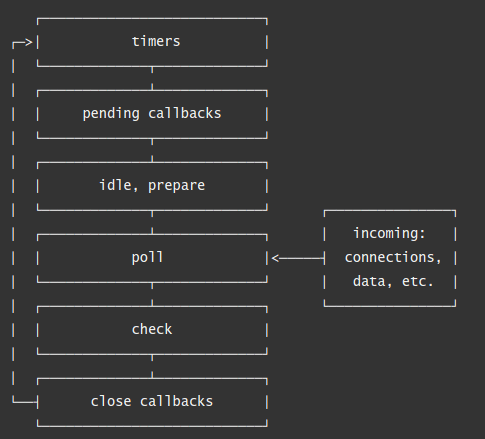 As shown in the figure above, each phase has a FIFO queue of callbacks to be executed.

Overview of the Phases:
timers: this phase executes callbacks scheduled by setTimeout() and setInterval().

poll: retrieve new I/O events; execute I/O related callbacks (almost all with the exception of close callbacks, the ones scheduled by timers, and setImmediate()); NodeJs will block here when appropriate.

More detail on this can be read from the official docs. 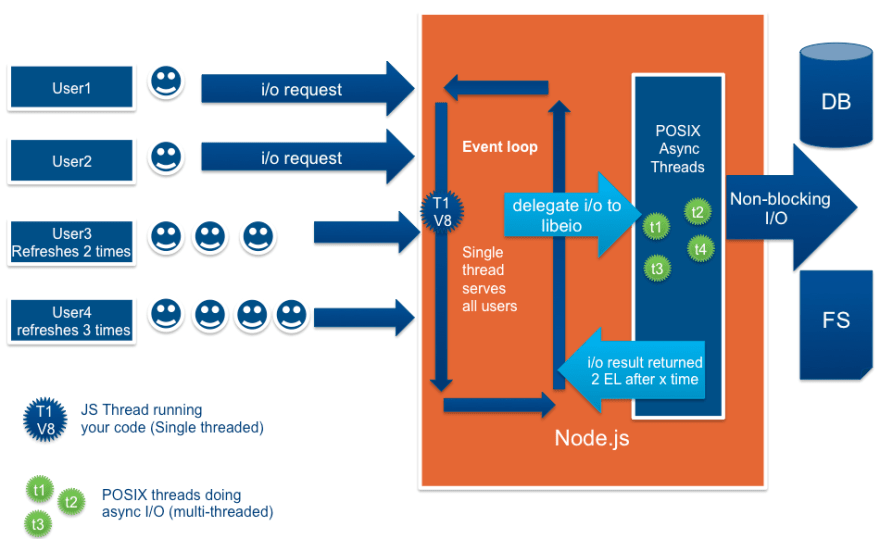 As shown in the above block diagram, Node.js listens and passes every concurrent traffic in a queue, which will be executed by an event loop as explained above. Let’s see an example to observe this single-threaded architecture of a Node.js web application.

In the above example, we are using express-js which we need to install from npm. To run the above script, simply type the following command in your terminal.

This is how Node.js works. Due to all these architectural implementations of Observer patterns, Node.js is pretty fast compared to similar other server-side languages and technologies.

This article was originally published in YIPL Blog.

34 YouTube Channels 📺 that will help you become a better Developer 🧑‍💻