Using TypeScript consistently offers a lot of benefits, especially for writing clean code to prevent unnecessary bugs and errors. But it takes some time and effort to learn, and you have to adapt every code snippet after copy-pasting from a tutorial or a StackOverflow example. Quite a challenge when re-using code for React, Node, Express and Mongoose like I did in my full-stack web app side project. 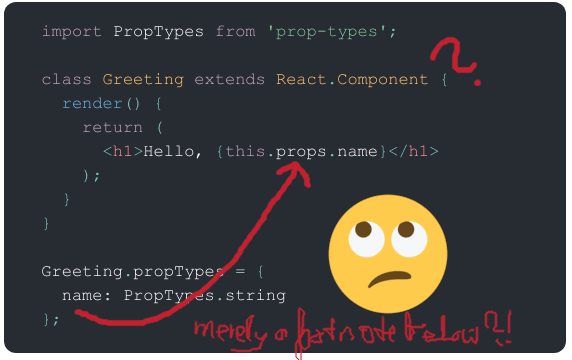 And there are no PropTypes in Vanilla JS.

Often overlooked, maybe never even heard of until now, JSDoc deserves more attention, as it brings a lot of advantages out of some short lines of documentation.

That's JSDoc's original purpose: generating a code / API documentation out of a few lines placed before variables, functions, and classes.

Similar approaches have been used with Java and PHP for a long time, and JSDoc follows established practice and is quite easy to learn.

Using JSDoc inside a modern IDE, you'll get another benefit: live code inspection, warnings, and proper code completion even for the most obscure DOM methods you never knew about before. Or well-known classics like event.currentTarget that still have some tricky pitfalls.

Here is a - seemingly simple - example: 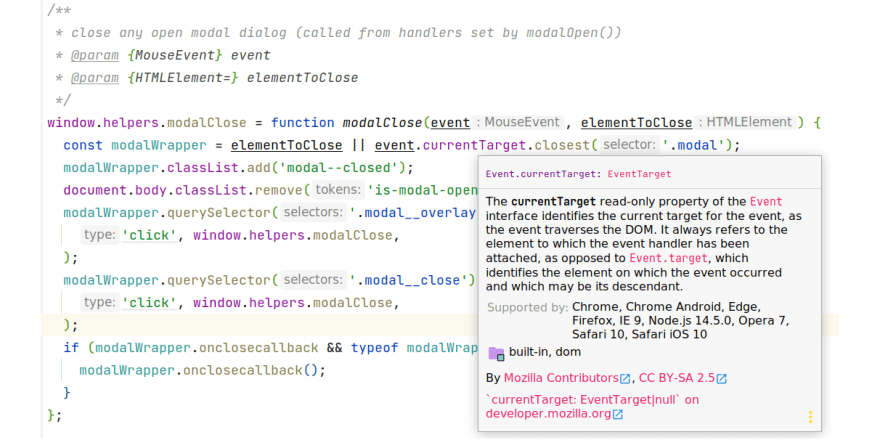 I wanted to allow a modal dialog to be closed typing the Escape key. My first quick code-like-it's-1999-style script (not shown here) was frowned upon by eslint. ☹️

So I decided to write proper, modern code, but still plain "Vanilla JS" (that does not need a transpiler to produce working code, unlike TypeScript, which does not have native browser support, not even in Microsoft's Edge browser).

I wrote a function that takes two arguments: an event, and an optional DOM element so that we are able to close a specific modal dialog from outside without relying on the event context.

telling my readers (of this code, and of a possible, automatically generated, documentation / API reference) what the function is supposed to do, and what arguments it expects:

Now my IDE (PhpStorm) will show me helpful information:

I don't even have to look up the proper type string to write in the JSDoc comment!

When I start typing, PhpStorm has some suggestions for code completion even in this special kind of comment, suggesting MouseEvent on top of the list.

The basic syntax is rather simple.

A parameter hint starts with an at sign, the word "param", and a type definition inside curly braces, followed by the parameter's name.

but to be more clear to human readers, we can also add anything behind the parameter's name, like

Now my editor shows me type annotations, that are not part of my written code (unlike they would be in TypeScript) but rather implicitly follow from my code. So my actual code stays short and compact, while the implicit meaning is still more obvious than before.

Not only do we see the additional hint event: MouseEvent, but when we start using the event in our code below, there are more code suggestions, helping us to choose methods and properties that are actually available and not deprecated.

More assistance as we continue: hints and documentation everywhere. We don't even have to visit MDN in our browser anymore! 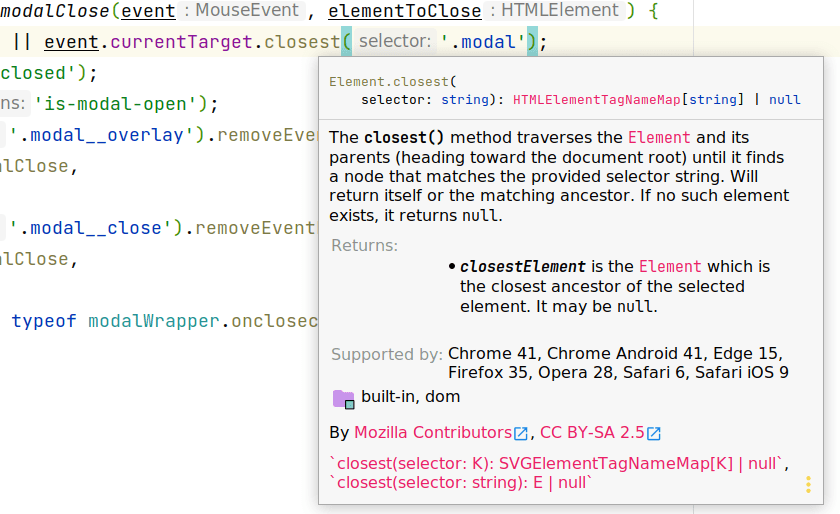 JSDoc makes coding in JavaScript easier, helping us to code quickly while avoiding obvious errors, just by adding some lines of optional comments in our code.

1 line of code: How to convert spaces to tabs